Phoenix
by
Will MacLaren 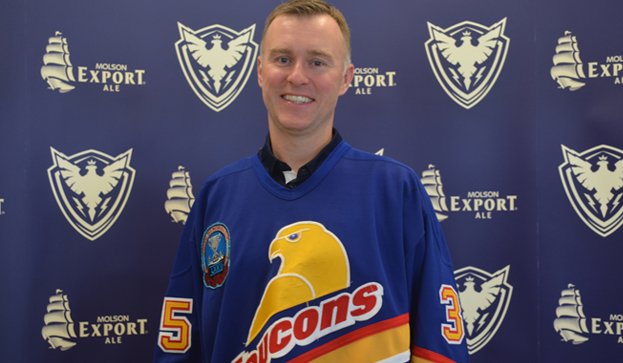 In 1992, the Trois-Rivieres Draveurs pulled up stakes and moved 95 miles south to Sherbrooke to become the newly branded Faucons. Along for the ride was a 17-year-old goaltender named Jocelyn Thibault. By the summer of 1993, Thibault had helped lead the Faucons to a President Cup Final appearance and stepped up to the podium as the 10th overall selection in the NHL Entry Draft.

Fast forward two decades. A 14-year professional career behind him, Thibault returned to the city that helped launch his career. A city that no longer housed a junior hockey franchise, despite a rich history in the QMJHL.

“I was saddened to see that the (Sherbrooke Castors) left (in 2003) and there wasn’t a franchise in the city,” Thibault explained. “After I retired from playing, I got to see some games and I had some friends working in the league. The mayor at the time wanted to bring a team back to Sherbrooke. We approached the league and got a team of investors together.”

Now a few weeks away from its eigth season, the Sherbrooke Phœnix franchise is a staple in the community and is fresh off back-to-back first round series wins in the playoffs. Originally a part of the club’s ownership group, Thibault’s has added the titles of Vice-President and General Manager to his portfolio since his arrival.

“I didn’t know how involved I would become, but my role has increased over the years,” Thibault remarked. “But I like the league. Every team is so well coached and managed. There’s a lot of structure there. Being involved in hockey, I consider it a privilege. I really enjoy being around the team on a day-to-day basis.”

Though he didn’t necessarily expect it, Thibault clearly embraces both his second stint in the QMJHL and what it means to the community.

“My years of playing in the “Q” led me to the pros,” Thibault said. “I learned so much and grew as a person. It’s not only a school of hockey. It’s a school of life. The team is supported so well by the city. When you see the Phoenix (in the media), you realize how much exposure the team brings to the city.”

The Sherbrooke team name – Phœnix – is symbolic of rebirth and rising again after conquering all odds. Fittingly so, Jocelyn Thibault’s return to the QMJHL has played an integral role in the rebirth of junior hockey in one of the league’s largest and most historic regions.