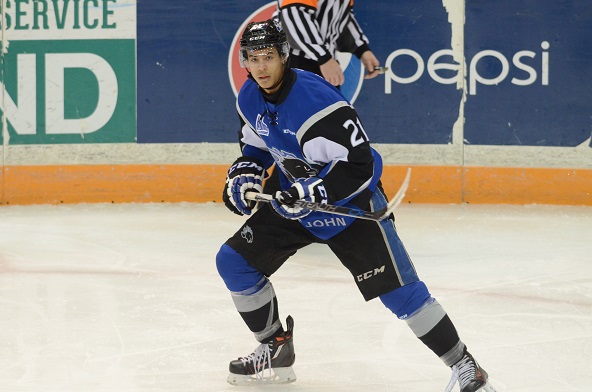 SAINT JOHN – Mathieu Joseph scored twice and added an assist to lead the Sea Dogs to a 3-2 win over the Cape Breton Screaming Eagles in Saint John’s 2016-17 home opener Friday at Harbour Station.

The crowd of 5,018 fans at Harbour Station was the Sea Dogs’ largest for a home opener since 2008.

The Sea Dogs needed only 49 seconds to open the scoring.

Saint John shot the puck into the Cape Breton zone and goalie Kevin Mandolese mishandled it behind his goal. Highmore put it in front of the empty net where Joseph, playing his first game since returning from training camp with the Tampa Bay Lightning, ripped it into the top of the cage.

LeBlanc, the former Sea Dogs captain who now wears the “C” for the Screaming Eagles, tied the game on a two-man advantage in the middle of the first.

The overage defenceman took a pass at the top of the right circle and hammered a one-timer past the blocker of Saint John goalie Alex Bishop.

The Sea Dogs used a power play of their own to regain the lead three-and-a-half minutes into the second.

Defenceman Oliver Felixson wristed a long shot from the left point that Highmore deflected through the crease. Joseph snuck in from the right side and chipped it past a sprawling Mandolese.

Smallman, making his season debut after attending Carolina Hurricanes’ training camp, made it a two-goal game with eight minutes left in the period.

The captain and fifth-year Sea Dog took a Nathan Noel pass near the faceoff dot in the left circle and crushed a one-timer inside the near post.

The lead stayed at two goals until Bourret potted his first QMJHL goal with 11.8 seconds left in the third, the result of a scramble near the Saint John crease after Cape Breton pulled Mandolese for an extra attacker.

Bishop earned his first win of the season with 15 saves.

Mandolese made 41 stops in a losing cause.

Joseph’s three points and nine shots on goal made him an easy choice for first star while Highmore’s two helpers warranted a second-star selection. Bokondji Imama, also in his first game back from Tampa Bay training camp, was named third star.

Saint John’s next game is Saturday, October 1st, at 7 p.m. against the Moncton Wildcats at Harbour Station. Tickets are available at the Harbour Station Box Office and online. Listen LIVE on 96.1 NewSong FM or newsongfm.ca. Watch LIVE on Neulion and on Rogers TV Channel 10.

Season tickets and flex packages are on sale now at the Harbour Station Box Office or by calling 657-1234. Click HERE for pricing information. You can also download our Season Ticket  and Flex Package order forms. Be sure to check out our NEW flex package options, including 6-, 10- and 20-voucher allotments.