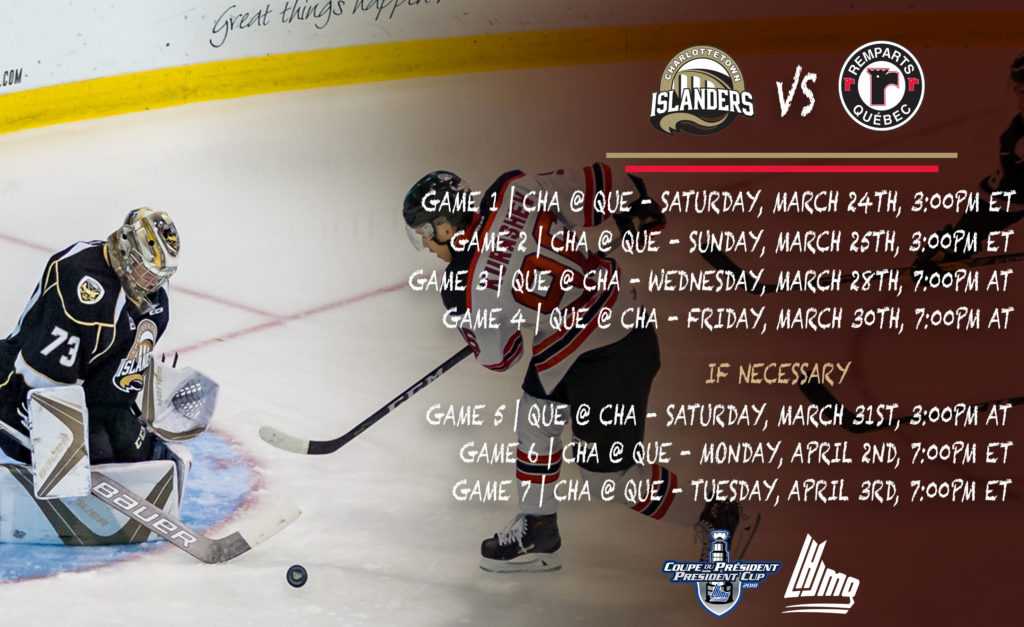 A hotly-contested series appears to be pending between the Remparts and the Islanders given the teams finished at No. 8 and No. 9 overall this season. Historically speaking, this marks the second playoff matchup between the clubs since the Islanders have called Charlottetown home, with the Remparts having won their quarter final series in a sweep back in 2015.

At the start of the season, many pundits predicted doom and gloom for the Islanders this year, but head coach Jim Hulton had other plans. His players have embraced his system and are a tough out every night. It’s no accident that he picked up his 117th career win behind the bench on March 17 to become the franchise’s all-time leader in that department. It was also no accident that he then promptly inked a new four-year contract extension.

Last spring, Hulton guided the Islanders to the third round of the playoffs, where his squad eventually bowed out to the Blainville-Boisbriand Armada in five games. On the Remparts side, head coach Philippe Boucher’s reputation speaks for itself as he is now in his fifth season in Quebec City after spending two years in a management role with the Rimouski Océanic.

The Remparts have lost in the opening round in each of the last two seasons, so you can bet that Boucher’s squad has no intention experiencing the same fate in 2018. The team is led by winger Matthew Boucher who amassed 69 points in a campaign that included a run of 15 points in nine games through November. Setting the table for him will be his centerman Philipp Kurashev who posted 60 points including a team-leading 41 assists this season. Another forward to watch will be Pascal Laberge who racked up 27 points in 33 games since arriving to Quebec via trade from the Victoriaville Tigres in December.

Defensemen Christian Huntley and Benjamin Gagné are not to be overlooked either with 38 points each on the blue line this year. The assignment between the pipes will go to Antoine Samuel, who picked up 15 wins in 22 games since joining the Remparts from the Drakkar. Two faces familiar to the Islanders will be taking on their former teammates as Matthew Grouchy and Gregor MacLeod, who arrived in Quebec from Charlottetown early in the season, will be fired up for this reunion. After struggling since landing in Quebec City, Grouchy is surely looking to remind everyone why the Remparts reached out for him in the first place.

Same will apply for Derek Gentile who made the opposite transition to now be in Charlottetown. Since he joined the Islanders, he’s averaged almost a point per game with 28 points in 30 games and his team will need him to continue lighting the lamp after seeing him amass 61 points in 2017-18. Also poised to drive the bus offensively for the Islanders are winger Daniel Hardie (25 goals and 53 points) and centre Keith Getson (20 goals and 49 points).

Islanders captain Pierre-Olivier Joseph will look to continue to raise his game and show why he was a first round pick of the Arizona Coyotes at the 2017 NHL Draft. In the crease, will Matthew Welsh be able to continue to be as dominant as he was throughout the regular season? The Islanders sure hope so in a series that will be tight, and one where both sides will battle it out for every inch of ice.