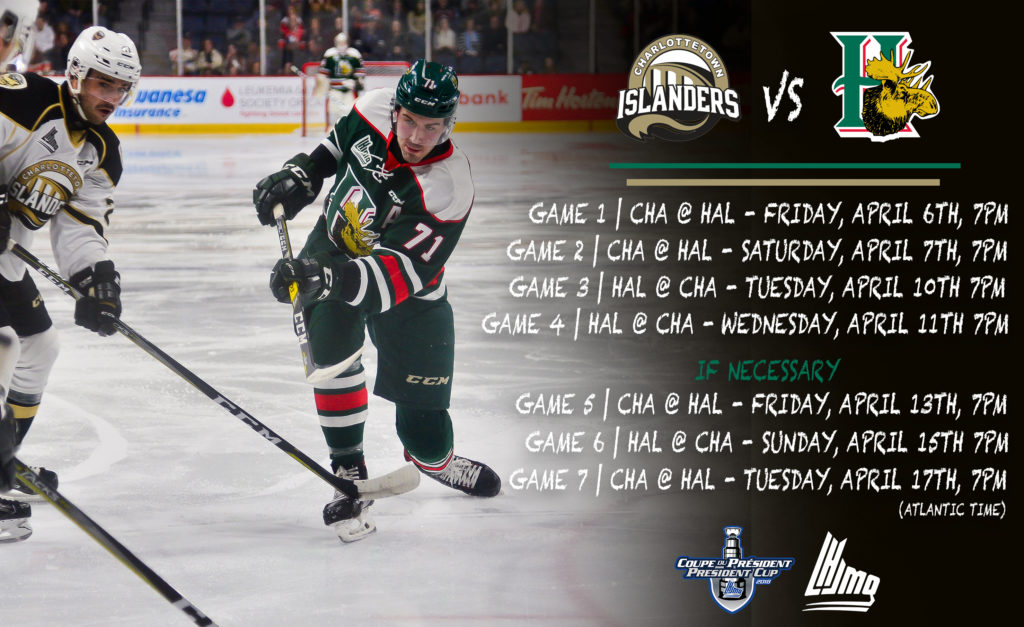 Few teams have captured headlines in the QMJHL this season with quite the same regularity as the Halifax Mooseheads and Charlottetown Islanders. And with reason.

The Mooseheads skyrocketed from 15th overall in 2016-17 to fourth this past season, sporting a 33-point improvement along the way. Boasting a plethora on high profile prospects for the upcoming NHL Draft, including winger Benoît-Olivier Groulx, defenseman Jared McIsaac, goaltender Alex Gravel and this year’s Mike Bossy Trophy winner for Top Professional Prospect, Filip Zadina, they advanced to the second round of the QMJHL playoffs for the first time in three years by eliminating the Baie-Comeau Drakkar in five games.

Add to that Thursday’s announcement that they will play host to the 2019 Memorial Cup, and the Mooseheads are indeed riding high, both on the ice and off. But they now prepare to face a team no less adept at creating headlines – the Charlottetown Islanders.

The Islanders were an afterthought for many followers of the league this season. Ignoring those negative predictions, the Isles did all that they could to control their own fate by finishing with an impressive 81 points on the year, good for 9th overall in the standings.

Pushed to the brink in the first round by the Quebec Remparts, the Islanders held strong, scoring six times in the third period and dispatching the Remparts in Quebec City on Tuesday night in an 8-3 Game 7 showdown. That victory propelled Charlottetown into the second round of the postseason for the third consecutive season.

The Mooseheads and Islanders faced each other nine times over the course of the 2017-18 regular season, with Halifax capturing seven of those encounters. Three of those games went to overtime, while two others were decided by two goals or fewer. The Mooseheads closed out the season series with the Islanders by winning the last four matches between the two clubs.

Historically, the division rivals have faced off only one other time in the postseason; that series ended in a four-game sweep for Halifax, in the first round of the 2014 President Cup playoffs.

The Mooseheads possessed a potent offense this year and the postseason has been no exception. Led by Zadina’s nine points in five games against the Drakkar, Halifax also received eight points off the stick of Arnaud Durandeau, and many of captain Max Fortier’s seven points came in clutch situations. Jocktain Chainey led the blueline corps with four points against Baie-Comeau, including the series-winning goal.

The Moose managed to find the back of the net 24 times against the Drakkar despite losing their top regular season scorer, Otto Somppi, to injury early in Game 1 of the series. Between the pipes, sophomore goaltender Alexis Gravel finished the first round sitting second in both GAA and save percentage with marks of 1.81 and .944%, respectively.

The Islanders have scored by committee all season long, with a different player stepping up at every turn. Wingers Daniel Hardie and Pascal Aquin tied for the team lead with eight points in the opening round, with four of Aquin’s team-leading six goals coming in the Islanders’ Game 7 triumph against the Remparts.

Scotiabank Center will be a homecoming of sorts for Halifax resident Matthew Welsh, who posted a 2.46 GAA for the Islanders in round one and made 36 saves in Charlottetown’s Game 7 victory.

This QMJHL quarter final series begins on Friday night in Halifax, with a scheduled puck drop at 7 p.m. AT.