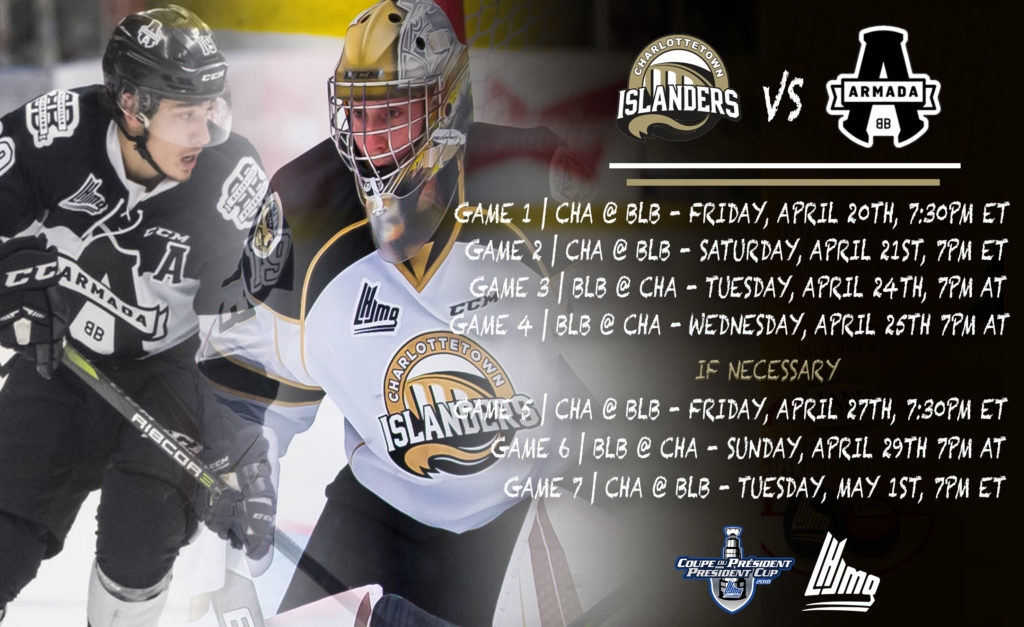 Last year when the Blainville-Boisbriand Armada and Charlottetown Islanders faced off in the QMJHL semifinals, the storyline was that of two powerhouse teams on a collision course. This year, the two teams will once again clash in the third round of the “Q” playoffs. However, the storyline has been altered.

The Armada, who advanced to the President Cup final for the first time in franchise history following their five-game victory over the Islanders in 2017, were once again part of the league’s upper echelon entering the current postseason. After a 107-point campaign that led to their first Jean-Rougeau Trophy as QMJHL regular season champions, the Armada have buzzed through the first two rounds of the playoffs, going 8-1 in the process. After dispatching the Val-d’Or Foreurs in a four-game first round sweep, the club proceeded to take out the Moncton Wildcats in five games.

Then there’s the Islanders.

Arguably the biggest story to come out of the 2018 QMJHL postseason, the Islanders simply keep winning – this during a year in which wins were supposed to be rare, according to many. Following up a solid ninth place finish in the regular season, the Islanders took out the Quebec Remparts with a convincing game seven victory on the road in the playoffs’ opening round. The club rode that wave of momentum past the Mooseheads in round two, sweeping a Halifax club that finished fourth overall during the season. The Islanders will have cooled their heels for ten days going into their opening game against the Armada in Boisbriand on Friday.

The Armada went 2-0 against the Islanders during the regular season. At home on December 1st, Blainville-Boisbriand recorded a 6-1 win thanks to Alexandre Alain, Alex Barré-Boulet and Luke Henman, who combined for 11 points in the victory. Then, on February 9th in Charlottetown, the Armada won 4-1 thanks in part to a pair of third period goals from Barré-Boulet and to Drake Batherson’s goal and two assists in the win.

As they did during the regular season, the Armada have used a balanced attack both offensively and defensively to march through the playoffs. Outscoring Val-d’Or and Moncton by a combined 50-19, the club boasts five of the top ten postseason scorers, including league leader Batherson, who has registered 18 points in nine games. Alain sits second in the “Q” playoff scoring race with 17 points, while rookie netminder Emile Samson has gone a perfect 7-0 between the pipes to go with a 2.07 GAA and .915% save percentage.

The Islanders are led offensively by Pascal Aquin, Nikita Alexandrov and Daniel Hardie, each with 13 points in 11 games. On a team that stresses offense by committee, it’s no surprise that five players have reached double digits in points, or that seven different players have registered game-winning goals. What is astounding, however, is how the Islanders have excelled in the second half of the games they’ve played during the postseason; 35 of their 45 goals so far these playoffs have been scored after the 10-minute mark of the second period. This statistical advantage played a key role in the Islanders’ three come-from-behind victories against Halifax during the second round. In nets, Matthew Welsh has been the man of the hour for Charlottetown, recording a 2.53 GAA and .921% save percentage along the way.

Will the Armada clinch a second consecutive berth in the President Cup Final? Or will the Islanders’ Cinderella run send them past the third round for the first time in their history? The answer will start to reveal itself on Friday.