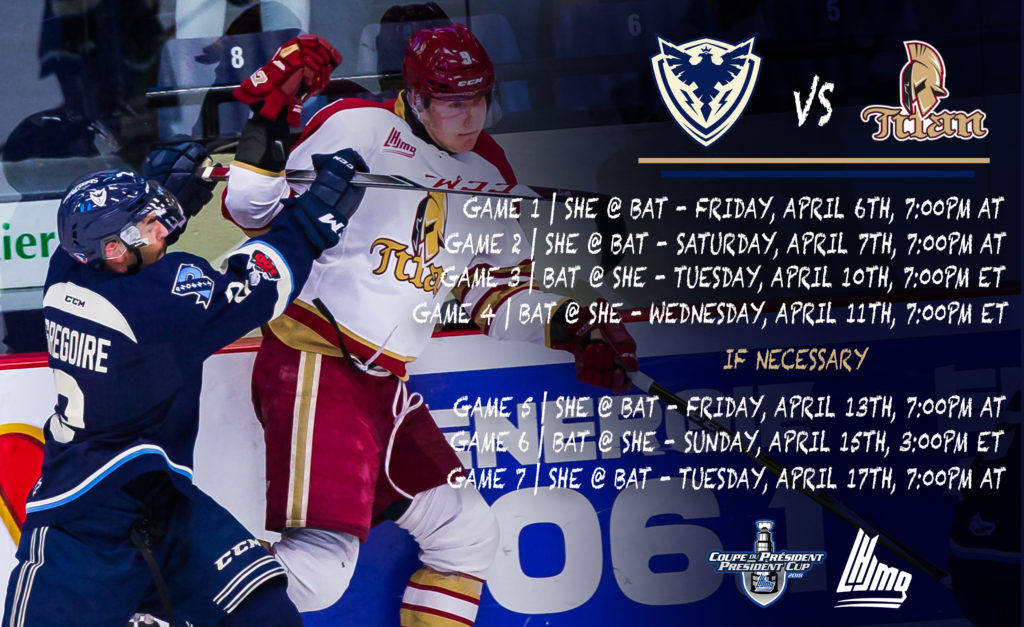 The Acadie-Bathurst Titan and Sherbrooke Phoenix will face off in the postseason for the first time in the QMJHL quarter finals. The series gets underway Friday night at the KC Irving Regional Center in Bathurst, New Brunswick.

The Titan have been a team full of comebacks all season long. Trailing the Halifax Mooseheads in the Maritime Division for the vast majority of the regular season, Acadie-Bathurst secured the division title on the last day of the season, with a dramatic victory before a sold-out crowd in Halifax.

Facing Chicoutimi in the first round of the postseason, the Titan and Saguenéens fought to a draw through the first four games of the series before Acadie-Bathurst found their groove, prevailing in six games. After going nine years between playoff series victories, this is now the second straight year in which the Titan will appear in round two.

The Phoenix entered the 2018 President Cup playoffs having won all of three postseason games during the course of their six-season history. Taking on the Rouyn-Noranda Huskies, Sherbrooke rallied from series deficits of 2-1 and 3-2 to win Game 6 at home in overtime and, ultimately, Game 7 in Rouyn-Noranda by a score of 3-1, for their first ever playoff series victory.

The Titan and Phoenix faced each other twice during the regular season. On November 19th in Sherbrooke, Samuel Poulin, the second overall selection in the 2017 QMJHL Draft, scored twice while his older brother Nicholas chipped in with a pair of assists in a 5-2 win over the Titan.

In Bathurst on January 31st, it was the Titan’s turn to skate away with the “W”, defeating Sherbrooke by a score of 5-3. Jordan Maher led the way with a goal and two assists as five different players found the back of the net for Acadie-Bathurst.

The Titan were led by a cavalcade of stars both during the season and against the Saguenéens in round one. Both Maher and team captain Jeffry Truchon-Viel led the charge with seven points apiece. The back end was led by recent Émile-Bouchard Trophy winner (QMJHL Defenseman of the Year) Olivier Galipeau as well as Adam Holwell, who both recorded five points in six playoff games so far. In the crease, former Phoenix goaltender Evan Fitzpatrick posted a 2.33 GAA in six games against Chicoutimi.

Despite Sherbrooke scoring just 16 goals in seven first round clashes, most of them came in timely fashion. Nicholas Poulin led the way with four goals, including the insurance goal in game seven against the Huskies, and seven points to his name. Thomas Grégoire topped all Phoenix defensemen with five points in the opening round. As for Samuel Poulin, both of his goals during the series with Rouyn-Noranda were game-winners. Former Titan goaltender Reilly Pickard posted a 2.56 GAA and .918% save percentage in round one for Sherbrooke.

The battle between goaltenders Fitzpatrick and Pickard – who were traded straight up for one another on January 2nd – is undoubtedly one of the key storylines to this series. And although the Titan and Phoenix have never faced off in postseason play, the Titan franchise has a history of playoff battles against teams from Sherbrooke dating back to 1975, when the team was based in Laval.

The last meeting between the (Laval) Titan and Sherbrooke (then known as the Faucons) was in 1993. The Titan eliminated Sherbrooke in the President Cup Final that spring. The goaltender for the Faucons in that series? None other than current Phoenix Vice-President and General Manager, Jocelyn Thibault!