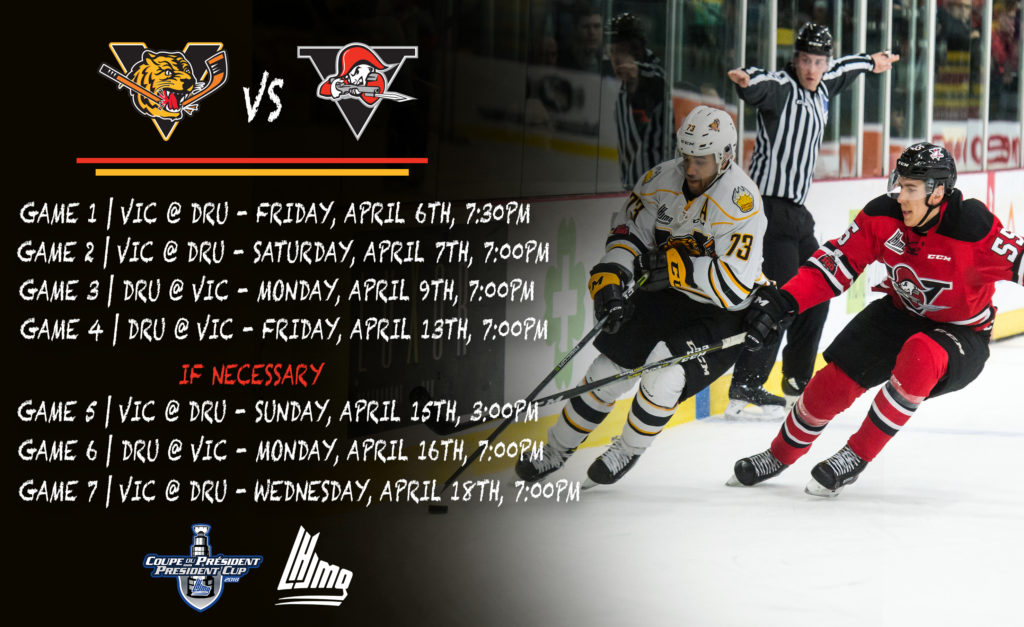 On top of pitting two teams from Central Quebec, this series will feature two of the most powerful offences in the QMJHL.

During the regular season, Louis Robitaille’s squad had the upper hand on Dominique Ducharme’s Voltigeurs to the tune of a 3-1-1-0 record in their five meetings. Robitaille, having himself been behind the Drummondville bench for nearly five years, most notably lived the first-round series between these rivals in the spring of 2014. That year, the Voltigeurs came out on top in a hard-fought, five-game series triumph.

Brilliant prospect Joseph Veleno has been producing since arriving in Drummondville and that has carried into playoffs so far. The touted prospect ahead of this summer’s 2018 NHL Draft scored four goals in five games in Drummondville’s opening round series win over Cape Breton. Veteran 20-year-old centre Yvan Mongo also made his mark against the Screaming Eagles with nine points, in addition to also leading by example for his young teammates.

Between the pipes, goaltender Olivier Rodrigue appears to be in the zone. He had an impressive opening round that saw him post a 2.03 GAA and a .911% save percentage. It’s no secret that a hot goalie in the springtime allows teams that have one to dream of a deep playoff run. The young goalie appears to have a bright future ahead of him and scouts are certainly taking notes.

However, if the Voltigeurs are going to get past the Tigres, they are going to have to improve on their power play, which only produced at a 16.7% clip against Cape Breton last round. Luckily their penalty kill did pick up the slack by allowing only one goal over of the 15 power play opportunities it faced against the Screaming Eagles.

From an experience standpoint, Drummondville does count several players who took part in last year’s President’s Cup Final with: Yvan Mongo, Connor Bramwell, Morgan Adams-Moisan and of course, Joe Veleno. That all adds up to an undeniable edge for their dressing room. That of course does not include head coach Dominique Ducharme’s impressive résumé, which includes both a President’s Cup title and Memorial Cup championship with the Halifax Mooseheads in 2013, and his gold medal won with Team Canada at this year’s World Juniors.

For the Tigres, it all begins with Vitalii Abramov who continued his dream season with 11 points in five games in the first round to eliminate his former team, the Gatineau Olympiques. Tigres’ GM Kevin Cloutier must be feeling really good about the player he acquired in November who has caught fire when it matters most. An interesting tidbit is that Abramov was also the most penalized players on his team, which is a trap he mustn’t fall into against Drummondville.

His Russian comrade Ivan Kosorenkov is also blooming this spring; the right winger put up nine points of his own in the first round. And, of course, rounding out that lethal top line for the Tigres is none other than Maxime Comtois. The undisputed leader of the Tigres and Longueuil native was uncharacteristically quiet in Round 1 with three goals and one assist, but he remains a dangerous threat in the offensive zone. It’s to be noted that Comtois also plays a big role in shutting down the opposition’s top players and is at his best on the penalty kill.

At the point, defencemen Jérémie Beaudin and Dominic Cormier both moved the puck well and teams must know better than to take penalties against Victoriaville. In the opening round against Gatineau, the Tigres exploded for eight goals in 31 power play opportunities (25.8%).

In the Tigres’ crease, Étienne Monpetit held his own against the Olympiques. He has a calming effect on his teammates as they skate with more confidence just knowing he’s back there. He has yet to allow more than two goals in a game so far this postseason.

Slated to be one the marquee matchups of the second round of the QMJHL playoffs, the action between the Tigres and Voltigeurs will get underway tonight (April 6) at the Marcel Dionne Centre in Drummondville.