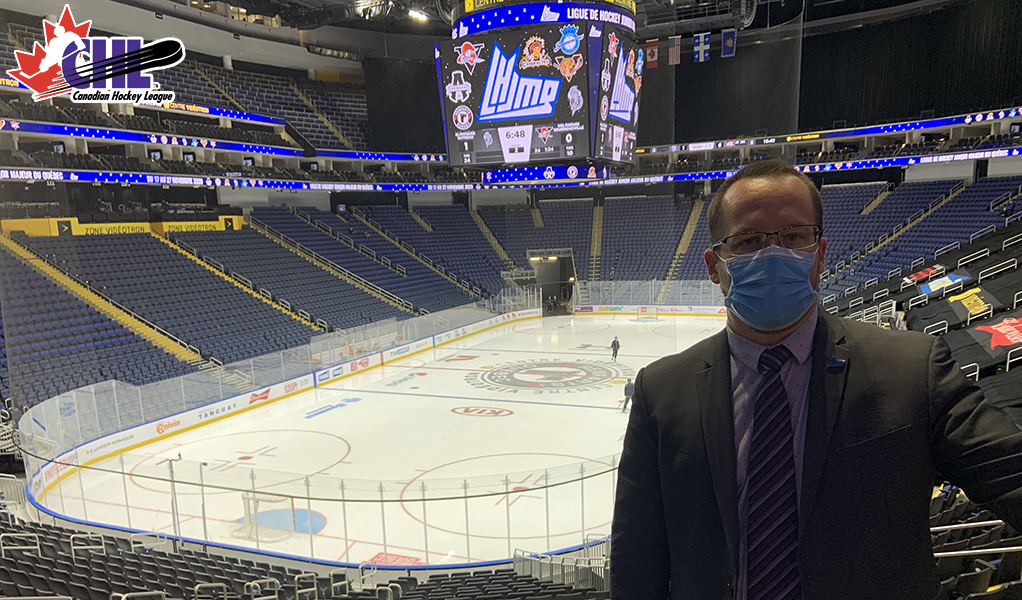 In all, the event allows for seven teams – the Blainville-Boisbriand Armada, Chicoutimi Sagueneens, Drummondville Voltigeurs, Gatineau Olympiques, Quebec Remparts, Shawinigan Cataractes, and Victoriaville Tigres – to return to play in the 2020-21 QMJHL campaign.

With the event now nearing its conclusion, the Canadian Hockey League sat down with the QMJHL’s Assistant to the Commissioner, Martin Lavallée, who highlighted the success of the protected environment:

CHL: What was the process with the Government of Quebec and Quebec Public Health that allowed the protected environment event to become a reality?

ML: First of all, we implemented our medical protocol for our training camps and the regular season. Then the first month of the season was marked by some COVID-19 situations and the implementation of some directives from the government that forced a couple of our teams to be unable to play games. We have a red zone within Quebec where it is forbidden to have hockey games. Our teams were able to practice but they were not authorized to play games. In our medical protocol, we developed different scenarios and began discussions with Quebec Public Health to allow us and our teams located in the red zone to play games. That’s how it happened. We had several meetings with Quebec Public Health. We sent out some scenarios and, in the end, they authorized our protected environment to play some games.

CHL: What were the recommendations from Quebec Public Health and what is the extent of the COVID-19 testing protocol?

ML: Quebec Public Health asked all of our players and staff members to be isolated for 14 days before the event. They had the opportunity to practice because they were all together for that and then they had to be tested three days before arriving in Quebec City. Then every three days during the event the staff and players have to be tested, so for the entire event they will have been tested five times – one time before and four times during.

CHL: What have been the overall goals and objectives of the event and how have they been met?

ML: The main goal was to let our teams play some games. We had two teams that only played two games since the first weekend of October. Our objective was to let those teams play some games before Christmas. Most of our teams now will have played 10 games or more than 10 games. Because of all of the circumstances and the second wave, it is a good thing that they have had an opportunity to play 10 or more games and that they are ready to be back on the ice maybe before Christmas and obviously after Christmas.

CHL: What was the decision process in scheduling six games per team?

ML: Naturally, because we have seven teams in place it allows the teams to play one game against each other. As well, for the duration of the event, we want to make sure we implement a quality to the event. We don’t want the event to be too long because it’s not easy for players and particularly staff members to be away from their family. We think that 12 days was a good target to try our first protected environment event. As well, because we had to confine all of our players for 14 days before the event, they were not allowed to go to school in-class so it would be a month away from class for some players. We want them to be back in class.

CHL: The event has allowed for QMJHL games to be played on a daily basis. What has been the fan response?

ML: Our fan base has shown a real interest in the event. Our broadcast numbers are greater than at this time last year and the same with our webcasts and additional platforms. We can see the numbers are increasing and we are really proud of it. I think it’s awesome that our fans really appreciate that they can watch games on the web and see the season going on. Considering all of those items, it has been a success.

CHL: What has been the reaction from players participating in the event?

ML: The players quickly understood that this is a great opportunity for them to play some games. If the event is a success, we might repeat it. The players know that if they do it correctly and respect our protocol directives, that if it goes well, we may repeat this and Quebec Public Health will help us to keep the season going on. When we walk in the venue and see the smiles on the faces of the players, and that the players are really happy to play and to have this opportunity, for us it is obvious that the owners made the right decision to have this event.

CHL: What is the likelihood of the QMJHL hosting another protected environment event?

ML: After this event, we will analyze it and have a discussion with Quebec Public Health to learn how we can make potential future events even better. Then we will see what the government’s decision will be on the red zone and how the situations evolve in Quebec. If the protected environment remains the only way to have some games, for sure we will analyze all of this and try to repeat this kind of event.

CHL: What has been your overall impressions from this event?

ML: It has been a great success. With all of our teams, we haven’t had any COVID-19 situations for our players. Our primary objective was to create a safe environment that would allow our teams to resume some activity and play as many games as possible in a given period of time. We have had good success with this event and everything has gone the way we thought it would so we are very proud.