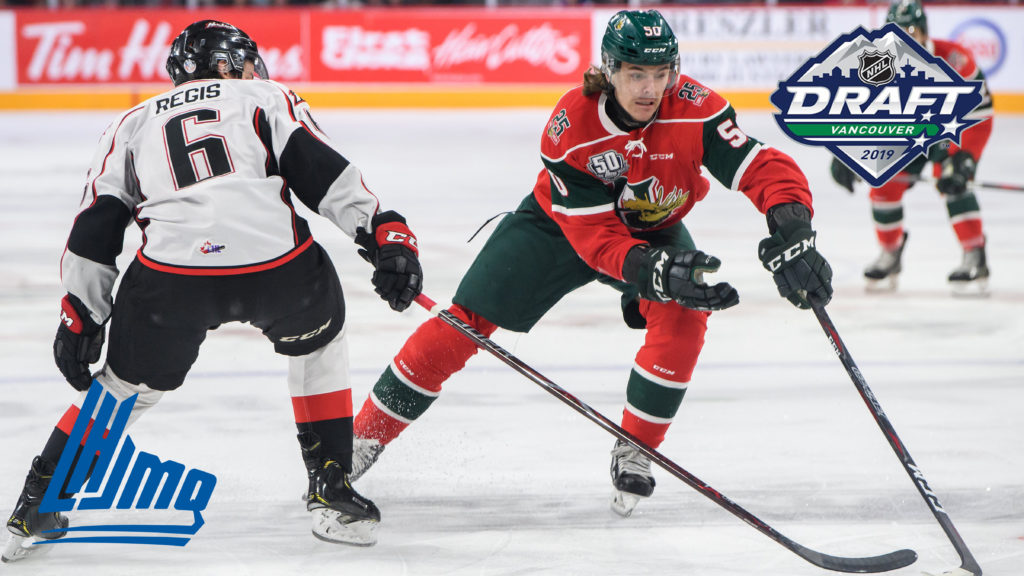 With the 2019 NHL Entry Draft set to take place in Vancouver, British Columbia this weekend, hockey’s future will be front and center as numerous teenagers will descend upon Canada’s West Coast to witness their burgeoning careers take what they can only hope will be the right path to success at the next level.

As per usual, the QMJHL is at no loss for potential top end talent entering the two-day selection process. Here’s a look at the top five prospects the league has to offer entering this year’s event, based on the NHL Central Scouting’s final ranking of North American skaters.

This weekend’s draft marks the culmination of a long journey for Raphael Lavoie, the winner of this year’s Mike Bossy Trophy as the QMJHL’s top professional prospect. A late birthday – he missed the cut-off for the 2018 Draft by ten days – has provided the 18-year-old from Chambly, Quebec an additional 12 months to showcase his skills in front of the scouts. Following an early cut from Team Canada’s selection camp in advance of the 2019 IIHF World Junior Championship, Lavoie took things to a higher level. A strong second half led to a phenomenal postseason run in which he led the circuit in goals (20), finished second in points (32) and helped the Memorial Cup host Mooseheads to a berth in the President Cup Final. He would continue that strong play while under the national spotlight, recording three points in four Memorial Cup games, including a highlight reel shorthanded tally scored against the Guelph Storm. Though his Mooseheads would drop both the league and tournament championships to the Rouyn-Noranda Huskies, Lavoie’s stellar play was a driving force behind a wildly successful run in Halifax this past spring.

Being a top prospect runs in Samuel Poulin’s family; his father, Patrick, was chosen ninth overall by the Hartford Whalers in the 1991 NHL Draft. Likewise, the younger Poulin is just two years removed from hearing his named called out as Sherbrooke’s second overall pick at the 2017 QMJHL Draft. Over the past two seasons, the 18-year-old from Blainville, Quebec has proven his worth by posting 121 points over the course of 122 regular season games. He’s also averaged nearly a point per game in 21 postseason appearances for a Phoenix franchise that failed to escape the first round of the playoffs until his arrival. Always a threat to either shoot or pass the puck with deadly accuracy, Poulin is no stranger to international competition as well, having suited up for Team Canada at the 2017 World Under-17 Hockey Challenge, the 2018 Hlinka Gretzky Cup and the 2018 IIHF Ice Hockey U18 World Championship.

As fortunate as Pelletier will no doubt feel when his name is announced at this weekend’s draft, it may be hard to top the level of gratitude felt by his linemates over the dynamic forward’s past two seasons in Moncton. Despite an injury at the 2018 Hlinka Gretzky Cup that wiped out his pre-season, Pelletier’s wizardry with the puck nonetheless carried him to a 39-goal, 89-point campaign with the Wildcats as a member of one of the league’s top scoring trios. That, as well as his solid two-way play, also helped lead his club to its second first-round playoff upset in as many years when the Wildcats took out the heavily favoured Baie-Comeau Drakkar in seven games. This on the heels of a rookie campaign in the “Q” that saw the Quebec City, Quebec native finish third in scoring among freshmen, as well as earn a berth on the league’s Rookie All-Star Team.

Since making his way from Germany to Prince Edward Island in the fall of 2017, Alexandrov has been tasked with gradually assuming larger roles with the Islanders at various intervals. Entering the 2018-19 season, his presence became more pronounced as a returning veteran on a squad expected to take a step back following a deep playoff run the year before. Following a series of transactions over the holiday period, it was up to Alexandrov to fill in a few more gaps as the Islanders elected to enter a more pronounced youth movement. All the 18-year-old from Burgwedel has done is respond with positive results. Those results – a 61-point performance during the most recent regular season, which represents a 30-point improvement over his previous campaign – have caused Alexandrov to soar in the rankings, moving up 16 spots since the mid-term CSR rankings were released.

Entering the major junior level at any position, let alone as a defenseman, is a daunting challenge for most. Doing so in one’s North American debut on an already youth-filled team only adds to the degree of difficulty. However, there were many nights during the 2018-19 season in which Artemi Kniazev made this transition look easy. The 18-year-old from Kazan, Russia brought along his experience in his home country’s junior system – not to mention a veritable laundry list of experience at the international level – and immediately made his mark at the Georges Vezina Center, finishing second in goals (13) and third in points (34) among all first-year rearguards. Kniazev’s reliable performance on the back end played a key role in the Sagueneens’ 24-point improvement in the standings over the 2017-18 campaign. He also expanded upon his résumé with Team Russia over the last year with appearances at both the IIHF U18 World Championship and the Hlinka Gretzky Cup.