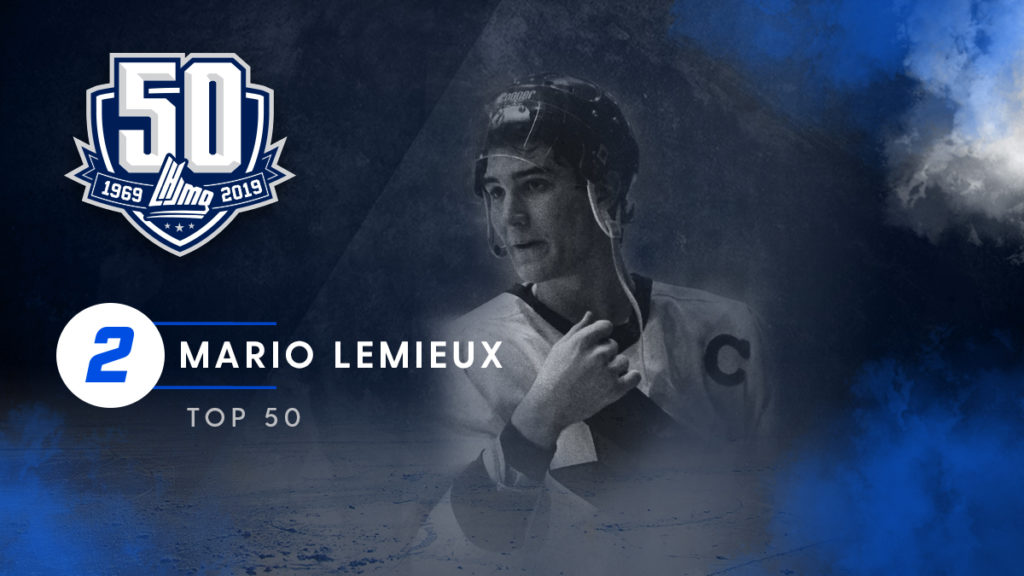 The 50th Anniversary of the Quebec Major Junior Hockey League will be celebrated in a number of ways this season. One of which is a countdown of the league’s 50 greatest players based solely on their QMJHL accomplishments. They stand out among 9511 players who played in the QMJHL over the past 50 years. Yours truly was part of the committee entrusted with the difficult task of making these selections.

The player ranked second by the committee in QMJHL history is Mario Lemieux.

The pride of Ville-Émard, Quebec, Mario Lemieux still holds the CHL record for most points in a season. His remarkable 133-goal and 149-assist campaign in 1983-84 will never be approached let alone surpassed. During that dream season with the Laval Voisins, Lemieux strung together a 61-game point streak – yet another record he still holds today.

Even 35 years after his QMJHL stint, that ridiculous season by “Super Mario” still boggles the mind. No. 66 notched no less than 21 hat tricks that year, had five eight-point games, and hit the 50-goal mark in only 27 games, matching the record set by Ray Ferraro six years earlier in the WHL.

In his final game of the season on March 14, 1984, at the Colisée de Saint-Vincent-de-Paul, he was only three goals away from matching Guy Lafleur’s record of 130 set in 1970-71. Lemieux left no doubt and scored no less than six goals that night, adding five assists in a 16-4 win over the Longueuil Chevaliers to smash a record no one ever thought would be broken as Wayne Gretzky looked on from the crowd having played in Montreal the night earlier against the Canadiens. Another interesting footnote to that historic season was how Lemieux ended up 112 points clear of his next closest rival in the scoring race – his linemate Jacques Goyette.

Lemieux is one of five players in league history to have topped 100 assists in two straight seasons. During his 200-game regular-season career, he scored 247 goals and 315 assists for a total of 562 points. Lemieux, who would spend only three seasons in the QMJHL before being the first overall pick of the Penguins at the 1984 NHL Entry Draft. He held the record for most playoff goals in a season (29), which stood for 14 years..

Mario, of course, then went on to enjoy a scintillating NHL career that included a pair of Stanley Cups in 1991 and 1992 with the Penguins – a team he now owns today. He is a five-time winner of the Art Ross trophy and three-time Hart trophy recipient. With 690 goals and 1,723 points over his NHL career, he remains the uncontested leader in both those departments among QMJHL alums. Lemieux was inducted into the QMJHL Hall of Fame in February 1999 and the Hockey Hall of Fame in 1997.