QMJHL Players of the Month | October 2020 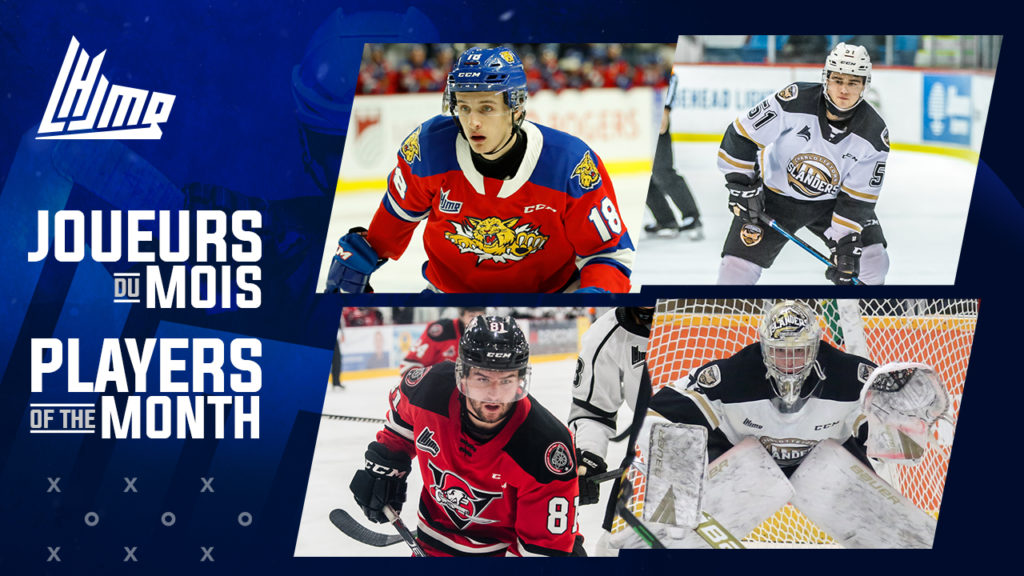 Once the Drummondville Voltigeurs get back to action, it is the club’s hope that their captain, Xavier Simoneau, continues along the same torrid pace with which he began the season. The 19-year-old center from Saint-Andre-Avellin, Quebec produced multiple points in each of his first four games of the season, guiding the Volts to a 3-0-1-0 record in the process. Simoneau’s last appearance came on October 10th, when his two-goal, three-point performance propelled his club to a 4-1 triumph over the Val-d’Or Foreurs.

It was a case of picking up right where he left off for the fourth-year veteran, who recorded points in 11 of his team’s final 12 games in 2019-20, a year that saw Simoneau achieve a career-high 89 points. The ninth overall selection of the Voltigeurs at the 2017 QMJHL Draft, Simoneau, the winner of last years’ Humanitarian Award for greatest community involvement in the “Q”, was invited to NHL training camp with the Toronto Maple Leafs in the fall of 2019. Furthermore, his month ended with an invitation to attend Team Canada’s National Junior Team Selection Camp in advance of the 2021 IIHF World Junior Hockey Championship held in Edmonton, Alberta.

Who’s going to stop Thomas Casey this season? No one has the answer to that question so far as the 20-year-old Charlottetown native has recorded a point in each of his team’s first nine games, a key factor behind the Islanders’ red hot 8-1-0-0 start to the 2020-21 campaign. Seven of Casey’s outings have been multi-point affairs, including a three-point night versus the Halifax Mooseheads on October 16th. A sixth-round choice of the Islanders in 2016, Casey, who attended NHL training camp with the Detroit Red Wings in 2019, is on pace to shatter his previous single season high of 47 points set last season.

It was widely agreed upon entering this season that any success the Charlottetown Islanders may encounter could be largely determined by the play of Lukas Cormier. So far, both player and team have passed the test with flying colors. The 18-year-old from Sainte-Marie-de-Kent, New Brunswick has put together what could be the first part of a career campaign, which includes five multi-point outings, a pair of powerplay tallies and the game-winning goal on the first night of the regular season. Additionally, Cormier has found himself even or better in the +/- category in seven of nine contests.

It’s been an eventful month for Cormier, the fourth overall selection of the Islanders at the 2018 QMJHL Draft. The early part of October saw him selected by the Vegas Golden Knights in the fourth round of the 2020 NHL Entry Draft. It concluded with him earning a spot on Team Canada’s National Junior Team Selection Camp roster in advance of the 2021 World Juniors tournament.

On a team that relies heavily on veteran leadership, Jarrett Baker has stepped up in every way possible for the Cape Breton Eagles. The 20-year-old from Halifax currently leads all QMJHL rearguards in scoring. Registering points in nine of his team’s first ten games, Baker’s top performance came on October 10th, when he put up three points in an Eagles’ victory over the Islanders. This represents the best start to the season for Baker, who was originally selected by the Drummondville Voltigeurs in the fifth round of the 2016 QMJHL Draft.

On a Moncton Wildcats club that is searching to find its identity after experiencing substantial roster turnover, Vincent Labelle has been one of the most pleasant surprises so far. The 18-year-old from Ottawa, Ontario hit the ground running in the QMJHL, scoring twice in his first game on October 2nd against Charlottetown. As impressive as his start was, Labelle’s end of October was arguably even more noteworthy, posting first a four-assist night in Halifax on October 29th, then a trio of assists in Bathurst on the 30th in the first back-to-back victories for the Cats this campaign.

After one month of regular season play, Labelle, who was a free agent invite to Wildcats training camp, finds himself atop the league in rookie scoring and tied for the team lead in goals, assists and points.

It didn’t take Markus Vidicek long to establish his presence in the Nova Scotia capital. On opening night, October 2nd, the 16-year-old from Kirkland, Quebec scored and added an assist against the Cape Breton Eagles. It would be the first of two multi-point efforts thus far in his young career. The highlight of the month for Vidicek, the 14th overall selection at the 2020 QMJHL Entry Draft, came on October 17th, when his two goals and one assist earned him the first star of the game in a victory over the Saint John Sea Dogs.

Colten Ellis arrived in Charlottetown after a trade with the Rimouski Oceanic during the off-season and has quickly made himself at home. The 20-year-old from Antigonish, NS has yet to lose a game this year while allowing two goals or less in five of his first six outings. One of his top performances came on October 16th when he kicked aside all 25 shots in a victory over the Halifax Mooseheads for his 12th career QMJHL shutout, good for a tie for 12th all-time in league history. Ellis’ early results find him leading the league in wins and tied at the top in goals against average.

A four-year veteran, Ellis was originally selected by Cape Breton in the fourth round of the 2016 QMJHL Draft. The winner of 80 regular season “Q” games entering this year, including a career-high 33 with Rimouski in 2017-18, Ellis was selected by the St. Louis Blues in the third round of the 2019 NHL Entry Draft.

Despite a long pause for the Foreurs due to Covid-19 restrictions this month, Jonathan Lemieux finished the first month of league play on the right foot. After allowing two goals or less in three straight contests, the 19-year-old from Saint-Hyacinthe, Quebec concluded October with a 34-save effort in a victory over the Rouyn-Noranda Huskies. A four-year veteran after being a third-round selection of the Foreurs at the 2017 QMJHL Draft, Lemieux is looking to post back-to-back 20-win campaigns with a strong Val-d’Or squad in 2020-21.