QMJHL Players of the Month | October 2019 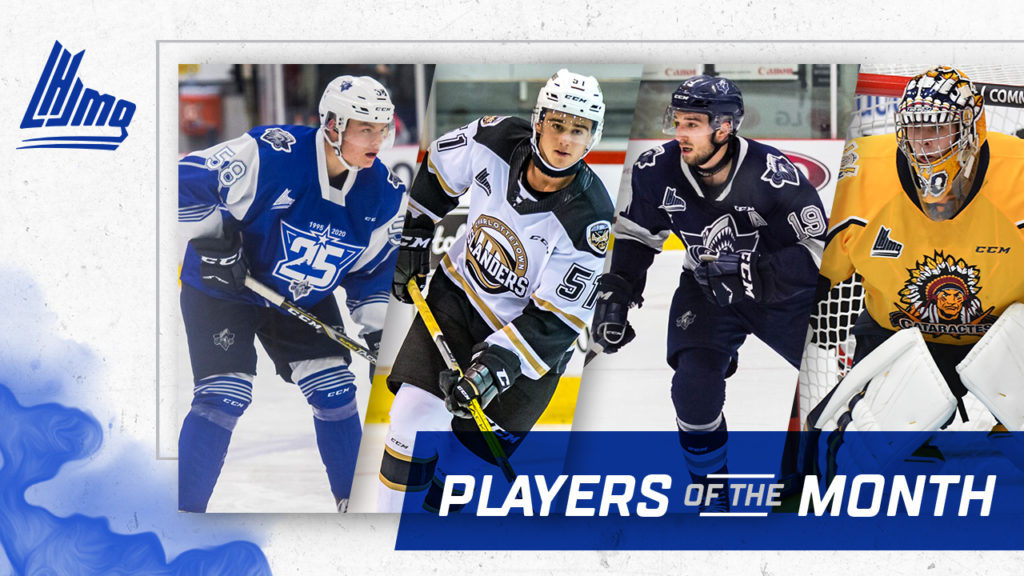 Playing on the top scoring line in the CHL is a definite luxury. However, every line, no matter how good, requires a trigger man. Enter Cédric Paré.

The 20-year-old from Pintendre, Quebec has been on quite a roll, recording points in 15 of his first 17 contests of the season, including a 12-game point streak. This included two six-point games, on October 20th versus the Quebec Remparts and October 31stagainst the Saint John Sea Dogs. He also had a five-point effort against the Baie-Comeau Drakkar on October 16th. As for goal scoring, Paré got the job done in that department as well, firing off three hat tricks in October, including the first four-goal performance of the “Q” campaign. Of the fourth-year veteran’s 16 goals, seven came on the powerplay while three were game-winners.

Paré, who attended NHL training camp with the Winnipeg Jets earlier this fall, currently sits tied with linemate Alexis Lafrenière for the league scoring lead with 43 points in 17 games and holds top spot outright in goals scored with 21. He is already just seven points away from snapping his previous record for points in a season, a mark he set in 2018-19.

With the Océanic sitting on top of the East Division and in a tie for second overall in goals scored, it’s no surprise that Alexis Lafrenière lands squarely under the spotlight.

Like Paré, the 18-year-old from Saint-Eustache, Quebec recorded points in all but two contests so far this season, including five games with four or more points. The biggest highlight came on October 20thagainst the Remparts when, after being held off the scoresheet by Quebec two nights earlier, the Océanic captain produced a five-point effort on a goal and four assists. Besides sitting atop the league’s scoring derby with linemate Cédric Paré, Lafrenière also finds himself in first place with 31 assists.

It’s been an up and down season for Lukas Cormier. Though missing from the Islanders roster due to injury since the 19thof October, the 17-year-old from Sainte-Marie-de-Kent, New Brunswick made the most of his time in the lineup.

Consistency has been the key for Cormier, who’s picked up points in 9 of his 13 games played during the month. This included a pair of two-point and three-point outings. Of his four goals, three came in consecutive games between October 4-11. Additionally, he holds a solid rating of +15, finishing at even or better 11 times.

The second-year blueliner, a prospect for the 2020 NHL Entry Draft, sits in a tie for fifth in league scoring among defensemen with 15 points in 13 games, all while helping the Islanders get off to a solid start in the current campaign.

The Cape Breton Eagles have begun the season by playing a high-flying brand of offensively charged hockey. Much of that output starts from the back end, of which Adam McCormick is a part of.

The 19-year-old from Woodstock, New Brunswick currently finds himself tied for second in scoring among defensemen. He’s had six multi-point efforts up to this point, the biggest being a one goal, two assist night against the Rouyn-Noranda Huskies on October 13th. His +/- differential of +19 places him in a tie for fourth overall in the “Q”. McCormick is currently on pace to shatter his previous high for points in a season of 37, which he accomplished during the 2017-18 campaign.

Seldom does it happen when a player leads all defensemen in scoring after a month and a half as a rookie. Then again, Isaac Belliveau isn’t just another player.

The Fleurimont, Quebec native, who will turn 17 on November 26th, can already boast of registering points in 14 of 17 games played thus far, including an eight-game point streak for the scoring savvy Oceanic. Five of those contests have been multi-point affairs, including back-to-back three-assist outings against Chicoutimi and Baie-Comeau on October 13thand 16th, respectively. Not only is Belliveau leading all defensemen in scoring, but he’s also got a firm hand on the rookie scoring crown. His nine powerplay assists place him third in the “Q” in that department.

Belliveau was selected by the Oceanic during the second round of the 2018 QMJHL Draft. Prior to suiting up in Rimouski, he spent two seasons with the Magog Cantonniers in the Quebec Midget AAA ranks, where he captured a league title in 2018-19.

When you’re a highly-touted prospect trying to find space on a talent-laden roster, sometimes you need to make your own breaks. Not only has Zachary L’Heureux made those breaks, but he’s also quickly become a game-breaker for the Moncton Wildcats.

The 16-year-old from Mercier, Quebec sits second in the league in scoring among freshmen. He began his QMJHL career on an 11-game point streak and recorded his first multi-point game, a three-assist effort, in just his third career contest. Moreover, he’s helped the Wildcats take the lead in the Maritimes Division standings entering the month of November.

The Shawinigan Cataractes were one of the surprises of the season’s first few weeks. The lynchpin of that successful start resided between the pipes, where Antoine Coulombe put together a start for the ages.

The 17-year-old from Montmagny, Quebec began the 2019-20 campaign by being, quite frankly, unbeatable. Not only did he win his first five starts of the season, but he also put together a streak of 191:15 without allowing a goal, a new QMJHL high watermark to kick off a campaign. Coulombe faced 30 or more shots in four of his six victories, including 34 against the Val-d’Or Foreurs on September 28th, a 2-1 Cataractes triumph.

A second-round selection of the Cataractes at the 2018 QMJHL Draft, Coulombe has rebounded admirably from a rookie campaign that saw him win four of 41 appearances. Besides a solid 6-2 record, he also leads the QMJHL in GAA (2.04), save percentage (.932%) and shutouts (two).

The Sherbrooke Phoenix is the top team in the QMJHL and ranked number one in the latest Kia CHL Top 10 Rankings. One of the players making a significant contribution to this success is goaltender Samuel Hlavaj.

The 18-year-old from Martin, Slovakia made an impression in his first few weeks of league play, finding himself tied for the league lead in wins and second in both GAA and save percentage. October was particularly rewarding for Hlavaj. His defeat of the Val-d’Or Foreurs on the first day of the month started a string of seven straight victories for the first-year netminder. He also recorded his first shutout in the QMJHL by turning aside 18 shots in a win over the Blainville-Boisbriand Armada on October 12th.