QMJHL Players of the Month – October

players of the month
by
LHJMQ/QMJHL 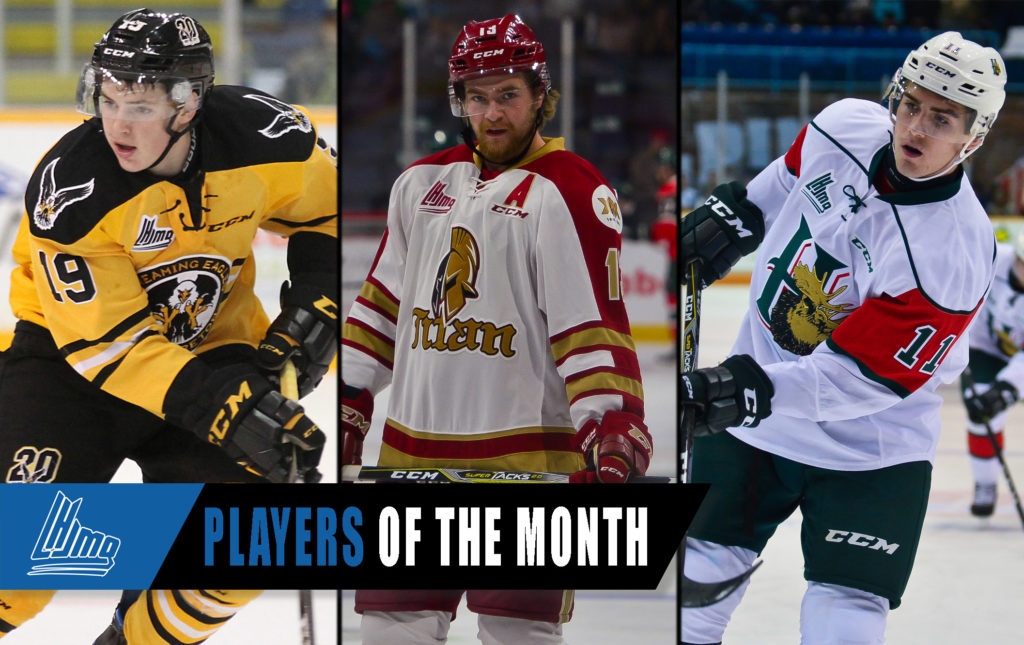 By noting that his Cape Breton squad has scored 65 goals up to this point, it goes to say that Batherson has contributed to nearly half of all the goals scored by his team.

The 19-year-old has amassed two points or more in seven of his games, and even has three consecutive outings in October in which he recorded four points! Batherson has been showing great consistency after getting his name on the scoresheet in 15 of his first 16 games.

The 4th round pick of the Ottawa Senators scored the game-winning goal in three of the Screaming Eagles’ ten victories and is actually sitting in the highest spot of the QMJHL’s top scorers.

Last season, Mika Cyr played in 35 games in which he cumulated a total of 21 points. That said, it is impressive to highlight the fact that he has already topped his personal best with 24 points this year, and all this in less than half the game he played in the prior season.

Largely thanks to a ten-game streak in which he recorded at least one point, Cyr currently finds himself tied for second among the Q’s top scorers.

The veteran defenceman has surprised many up to this day by finding himself as the top scorer of the Titan with 16 points.

What’s just as impressive is the fact that he’s maintained a +13 differential this season, more than doubling the teammate that trails him in that category. In 13 of his games, Holwell has finished on the positive side of the Plus-Minus ratio, which represents 76% of his games up to this point.

He’s also been excelling on the power play, as displayed by half of his points coming on the man advantage. Thanks to his 16 points on the Titan’s 52 goals scored, Holwell has contributed to 31% of his team’s offense.

It is difficult to find a weakness in Welsh’s play up to this point in the season. The Wildcats blueliner is the league’s highest scoring defenceman with 17 points that include two goals and six helpers on the power play.

Welsh’s 15 assists are the most in that category amongst all defencemen. He sports a +7 ratio – his trademark – that give him a +61 total over his QMJHL career.

It is impossible to ignore the Mooseheads latest sensation. In 16 games, Zadina owns a total of 24 points that includes 12 goals. He currently has a 1.5 point-per-game average, and a +8 differential as well.

His totals shouldn’t come as a surprise though, as Zadina is firing an average of over four shots on goal per game. He is currently his team’s top scorer, a single point ahead of 20-year-old veteran Maxime Fortier.

Zadina has amassed points in 14 of the 16 games he’s played in and has had an impressive eight game total in which he had two points or more.

The rookie quickly justified why the Wildcats selected him 3rd overall in the past QMJHL entry draft. After being blanked from the scoresheet in his first two games in the QMJHL, Pelletier caught fire and went on to post at least one point in eight consecutive games.

At the moment of writing these lines, only Zadina had more points than Pelletier as a rookie, and only six players had more than him across the entire league!

N.B. – All statistics recorded in this article include, exceptionally, those from the month of September as well.