QMJHL Players of the Month | November 2019 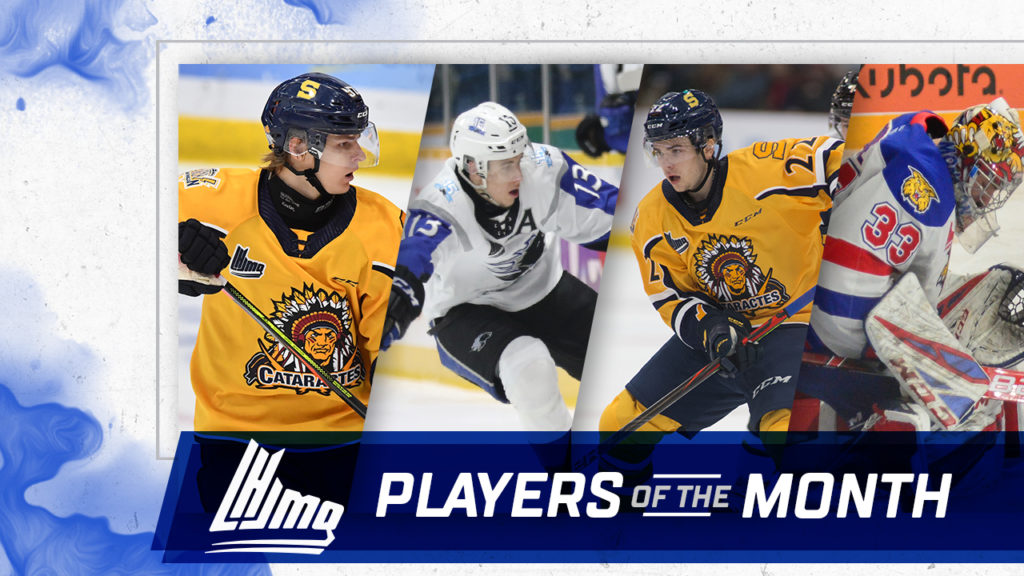 The Shawinigan Cataractes are an up and coming club in the QMJHL and nobody on their roster embodies this spirit quite like center Mavrik Bourque. The 17-year-old from Plessisville, Quebec started the month off hot, chalking up three points on November 1st against the Chicoutimi Sagueneens. It would be the first of six multi-point games Bourque recorded during the month. The biggest highlight came on the 12th versus the Saint John Sea Dogs when he posted his first career five-point night in the “Q”. A model of consistency, the second-year attacker scored at least one point in every November contest, part of what has since become a 16-game point streak.

With 40 points in 26 games, Bourque sits atop the Cataractes in scoring and is tied for seventh overall in the league as the calendar turns to December. That includes a team-leading 18 goals. The third overall selection in the 2018 QMJHL Draft, Bourque is a “B” rated prospect (projected second or third round pick) for the 2020 NHL Entry Draft.

The @Cataractes_Shaw forward is on fire right now! He’s scored in seven straight games and is on a ten-game point streak! 🔥🔥#QMJHL | #UltramarPlayer

Halifax Mooseheads’ captain Benoit-Olivier Groulx is doing his best to lead his club by example. Highlights of his month included six multi-point outings and a point registered in each game during November. Currently sitting second on the club with 36 points in 23 games through the end of the month, Groulx has been held off the scoresheet just twice all season! The Anaheim Ducks prospect’s strong early season performance has played a vital role in his invitation to Team Canada’s selection camp in advance of the 2020 IIHF World Junior Hockey Championship.

The Saint John Sea Dogs were astray for much of the month, contesting eight of their eleven games on the road. For William Villeneuve, he made those visiting rinks around the league his home away from home. The 17-year-old from Sherbrooke, Quebec posted multiple points on three occasions while averaging almost three shots per contest. On the other side of the puck, the second-year rearguard recorded a +/- rating of zero or higher in 10 of 11 November games. Furthermore, he’s helped the Sea Dogs create some much-needed separation in the standings as they vie for their first postseason berth since 2017.

The second overall selection in the 2018 QMJHL Draft, Villeneuve sits fourth among blueliners entering December with 25 points in 28 games while his 20 assists place him second in the league in that department. He is a prospect for the 2020 NHL Entry Draft.

William Villeneuve sends a shot through a screen and makes it 3-0 Sea Dogs. pic.twitter.com/7h5BLC96pG

Not only did the Victoriaville Tigres reverse their fortunes and vacated the Western Conference basement during the month, so too did Jérôme Gravel find himself trending upward. Among the highlights were three multi-point outings, a +/- rating of zero or higher on nine occasions and a game winning tally – part of a two-goal game – against the Quebec Remparts on November 28th. The 20-year-old from Chambord, Quebec sits in a three-way tie for second in the club’s scoring derby with 17 points in 28 games.

The youth movement in Shawinigan has yielded several positive results this season thus far. Vasily Ponomarev is yet another young gun that’s shooting out the lights for the Cataractes. The 17-year-old from Zelenograd, Russia struck early and often during November, not only notching a point in ten of twelve contests but also producing seven multi-point outings. Among the highlights was Ponomarev’s first career two-goal game on November 9th against the Tigres.

The ninth overall selection in the 2019 CHL Import Draft, Ponomarev’s 27 points in 26 games through two and a half months of the regular season place him second among freshmen in the “Q” and second on the Cataractes overall in scoring. He is listed as a “B” prospect for the 2020 NHL Entry Draft taking place next June.

Samuel Hlavaj has been exactly as advertised for the Sherbrooke Phoenix and more. The 18-year-old from Martin, Slovakia has kept the first place Phoenix flying high thanks to such performances as a 42-save effort against the Cape Breton Eagles on November 14th, as well as shutouts against the Val-d’Or Foreurs and Charlottetown Islanders on the 9th and 23rd, respectively. The latter whitewash was his third of the season, giving him a tie for the league lead in that category. He also tops the circuit in GAA (2.05) and save percentage (.926%).

The Moncton Wildcats have consistently been one of the top teams in the entire CHL this year. One of the not-so-secret ingredients to their success plies his trade between the pipes. 19-year-old Chicoutimi native Olivier Rodrigue took it to another level in November, allowing three goals or less in every one of his starts during the month. The high-water mark for the fourth-year netminder took place on November 21st when he made 32 saves against a fellow Eastern Conference power, the Chicoutimi Saguenéens, to earn his first shutout in a Wildcats sweater. Overall, three of his starts during the month resulted in him passing in a save percentage of .950% or higher.

A third overall selection of the Drummondville Voltigeurs at the 2016 QMJHL Draft, Rodrigue sports a sterling 15-3-0-0 record entering the final month of 2019, while also ranking second in the league in GAA (2.55) and third in save percentage (.912%). He was a second-round selection of the Edmonton Oilers at the 2018 NHL Entry Draft.

Appearances in both the President and Memorial Cup finals in 2019 isn’t enough to make Alexis Gravel rest on his laurels. The 19-year-old from Asbestos, Quebec put up a solid month, allowing three goals or fewer in six of his eight starts. However, the best November game for the 2018 Chicago Blackhawks draftee might have been his final one, when he turned aside 32 shots to shut out the Blainville-Boisbriand Armanda on the 30th. For the fourth-year netminder, the whitewash was his first of the season and the seventh of his QMJHL career.

Chicoutimi Saguenéens QMJHL Alumni
Our Alumni | An outstanding student, Nicolas Therrien is now reaping the fruits of his labor
23 hours ago