QMJHL Players of the Month – November 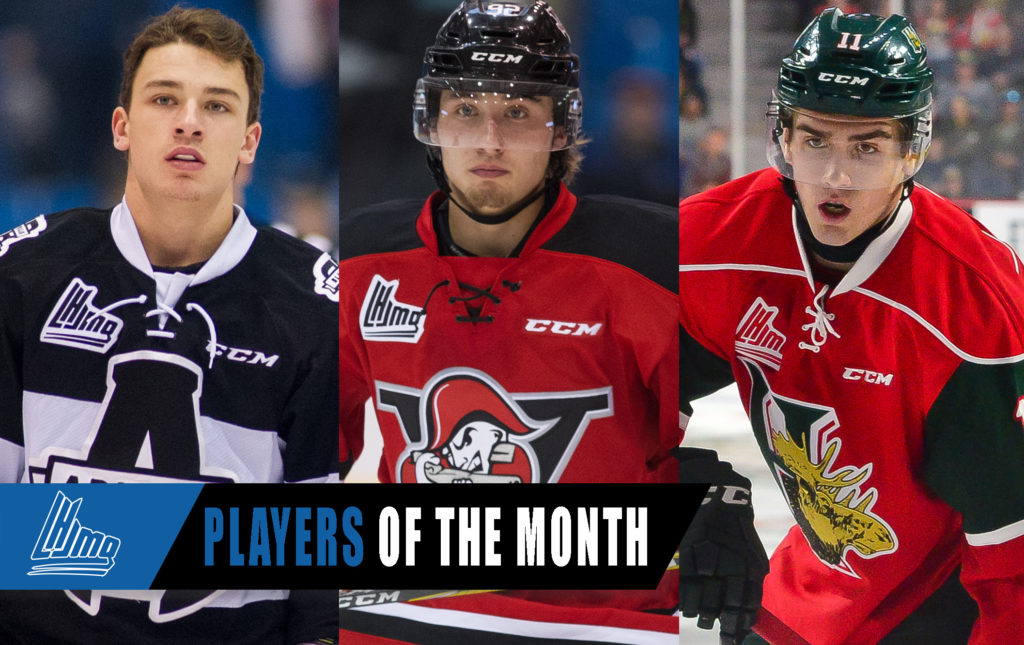 Over 10 games only in November, Alex Barré-Boulet managed to collect a total of 24 points. Of the 11 goals he scored, six were game-winners. He actually owns the QMJHL’s top spot in that category, having scored eight game-winning goals this season.

By maintaining a 2.4 point-per-game average over the past month, the forward now finds himself a single point off the league lead. With his 18 goals and 19 helpers in 23 games, Barré-Boulet and his 37 points now only trail Matthew Boucher (Remparts | Québec) and Filip Zadina (Mooseheads | Halifax) who have 38.

On this past November 11, Barré-Boulet scored his 100th career regular season goal in the QMJHL. Loyal to his habits, it’s by netting the eventual game-winning goal that he reached this important milestone.

The Montmagny native had no less than five games of three points or more over the month of November. During a 7-5 win over Quebec on November 22, he actually set a new personal best by registering five points with two goals and three assists.

Abramov caused quite a stir in November when he was traded from the Gatineau Olympiques to the Victoriaville Tigres. He was actually enjoying quite the hot-streak before leaving his former squad after having amassed seven goals and six helpers in the last six games he played for Gatineau.

Despite a small adaptation period, Abramov didn’t waste much time before making an impact in Victoriaville. Even though he didn’t find the back of the net at his usual pace to close off the month of November, he still managed to collect a goal and eight assists over the seven games he’s played in the Tigres’ black ang yellow colors.

Beaudin was the Voltigeurs’ top scorer over the month of November with 13 points in 11 games. He scored fours goals with half of them being game-winners. All in all, his 13 points represented no less than 30% of his team’s total offence over the past month.

In regards to his Plus-Minus ratio, Beaudin concluded the month with either an even or positive differential in every game he played. As a matter of fact, with a +11 ratio in November, the prospect eligible for the upcoming NHL Draft currently leads the QMJHL with a total of +21 in 2017-18. Interestingly enough, Beaudin was on the ice for only eight of the even-strength goals scored against his squad in November!

The blueliner also possesses a flare for the dramatic; he scored the game-winning goal in a 2-1 overtime win over Halifax on November 4. Three weeks later, he helped his team to a 6-5 win over Victoriaville by collecting an assist, once again, on the overtime game-winning goal.

But it’s on November 11 that the smooth skating d-man showed what he was all about. In a 7-4 win over Val-d’Or, Beaudin set a new personal best with five points, one goal and four helpers.

He is the leader of a defensive squad that allows only 25.7 shots against per game, the lowest average in the QMJHL so far this season. His team has won eight times in November to end the month on top of the league’s standings, tied with the Quebec Remparts at 38 points apiece.

After missing nearly all of October, Corbeil came back with a bang in November. He picked up points in eight of the ten games he played, including five games where he had two points or more.

The Longueuil native even set new personal bests by picking up four assists and five points in a 5-4 win over the Remparts on November 5.

Despite playing in ten games less than most of his competition, Corbeil’s 22 points place him as the league’s 9th top scoring defenceman. He is only six points behind the current leader, Olivier Galipeau (Saguenéens | Chicoutimi).

In 11 games in November, the Mooseheads rookie forward amassed 14 points with a perfect balance of seven goals and seven assists. In those 11 games played, Zadina picked up two points or more in four of them.

On November 3 he scored his very first QMJHL hat trick, setting a new personal best of four points along the way, in a 7-5 win over Gatineau.

He currently shares with Matthew Boucher (Remparts | Quebec) the top spot of the QMJHL’s scoring race thanks to 38 points in 27 games played.

Morrone was splendid for the Tigres when he kicked off the November 17 weekend with a 4-0 shutout win over the Baie-Comeau Drakkar.

After turning aside all 27 shots fired his way on the Friday, the rookie earned a second straight start on the Sunday. He answered the call by stopping 34 shots this time around, earning a second win and a second shutout in as many games.

He ended the month of November with an impressive save percentage of 0.950% and a goals-against average of 1.59.