QMJHL Players of the Month | January 2020 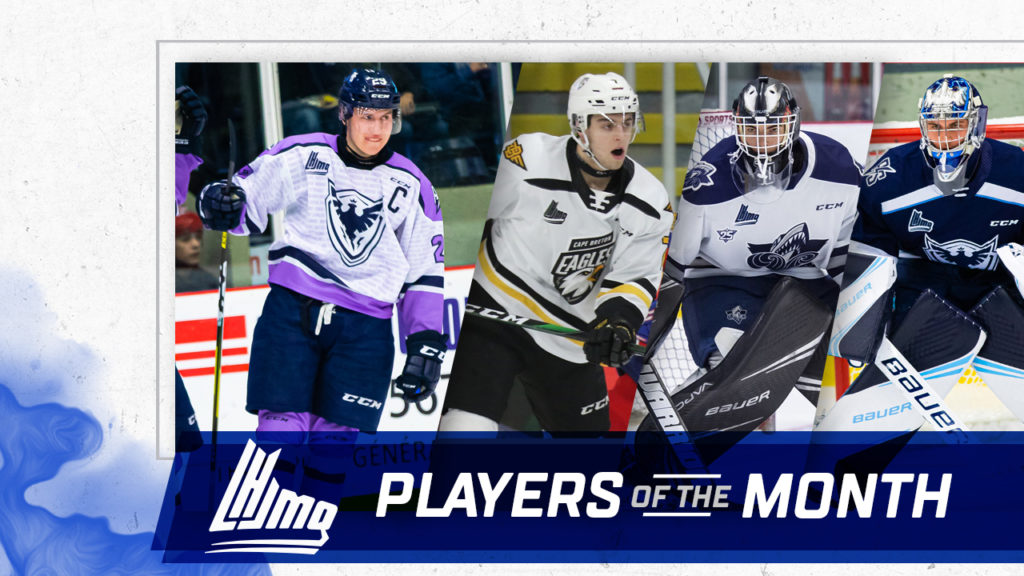 Injury robbed Samuel Poulin of a significant chunk of the 2019-20 season. However, once he pulled on the Sherbrooke Phoenix sweater again in early January, the 18-year-old from Blainville, Quebec quickly proved that he hadn’t missed a beat.

The Phoenix captain produced five games with three or more points in the month, including a pair of five-point outings against the Acadie-Bathurst Titan and Drummondville Voltigeurs on January 24th and 28th, respectively. The end of the month saw him register 16 points in just four contests, during which time he posted both a three-goal and a four-goal game, as well as game-winning tallies in three straight outings. The third-year veteran did not endure a single negative +/- outing in ten January contests as the Phoenix successfully maintained their stranglehold on first place overall in the QMJHL standings.

Poulin was originally selected second overall by the Phoenix at the 2017 QMJHL Draft. With 59 points in 35 games entering the month of February, the 2019 Pittsburgh Penguins first-rounder in on pace to not only surpass his previous career high of 76 points set last year, but also eclipse the 200-point plateau for his QMJHL regular season career.

The Cape Breton Eagles have been the most successful team in the league since the calendar turned to 2020. Egor Sokolov has played a critical role in this streak. Upon his return from the 2020 IIHF World Junior Hockey Championship, the 19-year-old from Yekaterinburg, Russia registered a point in every game during the month, part of a larger, 15-game point streak. His January highlights included a three-goal game on January 8th versus Saint John and a four-goal showing against Blainville-Boisbriand on the 23rd. Sokolov enters February leading the “Q” in goals (37) and game-winning goals (8), while sitting third in points (71).

One of the reasons behind the Eagles’ success this season has been their standout two-way play from the back end. One of the key cogs in that machine is Adam McCormick. The 19-year-old from Woodstock, New Brunswick proved to be a consistent threat throughout the first month of 2020 with point streaks of three and four games, respectively. Additionally, the fourth-year veteran registered a +/- of even or better in every January game, finishing at +13 overall for the month – in fact, he’s been a minus player on just five occasions through 34 games this year. Meanwhile, his Eagles completed January with a 10-1 record, outscoring their opposition 60-28 along the way.

A third-round selection of the Eagles at the 2016 QMJHL Draft as well as a free-agent invite to NHL training camp with the Dallas Stars in 2018, McCormick has put up 28 points in 34 games entering play in February, putting him on pace to shatter his former career high of 37 points, set in 67 games in 2017-18.

Chances are, if Christopher Merisier-Ortiz was on the ice in January, the Baie-Comeau Drakkar were in prime position to find the back of the net. The Boisbriand, Quebec native, who turned 19 on January 17th, registered points in seven games during the month. Six of those were two-point efforts, including three in a row from the 22nd to the 25th. Selected seventh overall by Baie-Comeau at the 2017 QMJHL Draft, Merisier-Ortiz, an assistant captain with the Drakkar, is currently tied for fourth in scoring among all rearguards with 36 points in 48 games.

Samuel Hlavaj’s impressive rookie season in the “Q” shows no signs of slowing down. Fresh off representing his home nation at the 2020 IIHF World Junior Hockey Championship, the 18-year-old from Martin, Slovakia went undefeated in January, part of an 11-game win streak overall. Hlavaj allowed two goals or fewer in six of his seven outings during the month while turning aside at least 25 shots on three occasions. His play has played an integral role in the Phoenix’s league-leading defensive numbers as the club ranks first in both goals against and penalty killing efficiency through the season’s first four months.

The 26th overall selection by the Phoenix during the 2019 CHL Import Draft, Hlavaj enters February as the league leader in goals against average (2.07) and save percentage (.924%) while holding down second place in victories (24) and a tie for second in shutouts (three). He is the highest ranked QMJHL goaltender ahead of the 2020 NHL Entry Draft.

It took a few weeks before Zachary Bolduc made his first appearance in an Oceanic uniform. Since arriving on the scene however, he’s more than made up for lost time. January for the 16-year-old center from Trois-Rivieres, Quebec featured points in eight of 13 games, three multi-point games and his second career QMJHL hat trick on January 22nd versus Drummondville. Add in four powerplay markers and three game-winners and it was a very eventful month for the 14th overall selection at the 2019 QMJHL Draft. Bolduc currently ranks tied for fifth in the rookie scoring derby with 37 points in 42 games.

It took no time at all for Creed Jones to feel right at home in Rimouski. After winning two games in the entire 2019 portion of the current season, the 19-year-old from Peterborough, Ontario posted a win to start the new year in what would be his final start for the Gatineau Olympiques.

Traded soon after to the Oceanic, Jones has been on fire ever since. The third-year netminder allowed no more than two goals in any of his January appearances while also recording a pair of shutouts on the 11th and 18th of the month against Rouyn-Noranda and Acadie-Bathurst, respectively. This would prove to be part of an overall shutout streak of 198 minutes and 41 seconds, the eighth-longest such sequence in league history.

You don’t go on a tear like the Eagles have as of late without receiving exceptional performances at all positions. In nets, the man of the hour has been Mandolese. The 19-year-old from Blainville, Quebec allowed three goals or fewer seven times during the month. He also shut out the high-octane Moncton Wildcats on January 4th and stopped 30 or more shots in a game on four occasions. A 2018 draftee of the Ottawa Senators, Mandolese continues to shine in what has been a career year that sees him enter the last full month of the regular season sitting third in the “Q” in GAA (2.31) and second in save percentage (.920%).