QMJHL Players of the Month – January 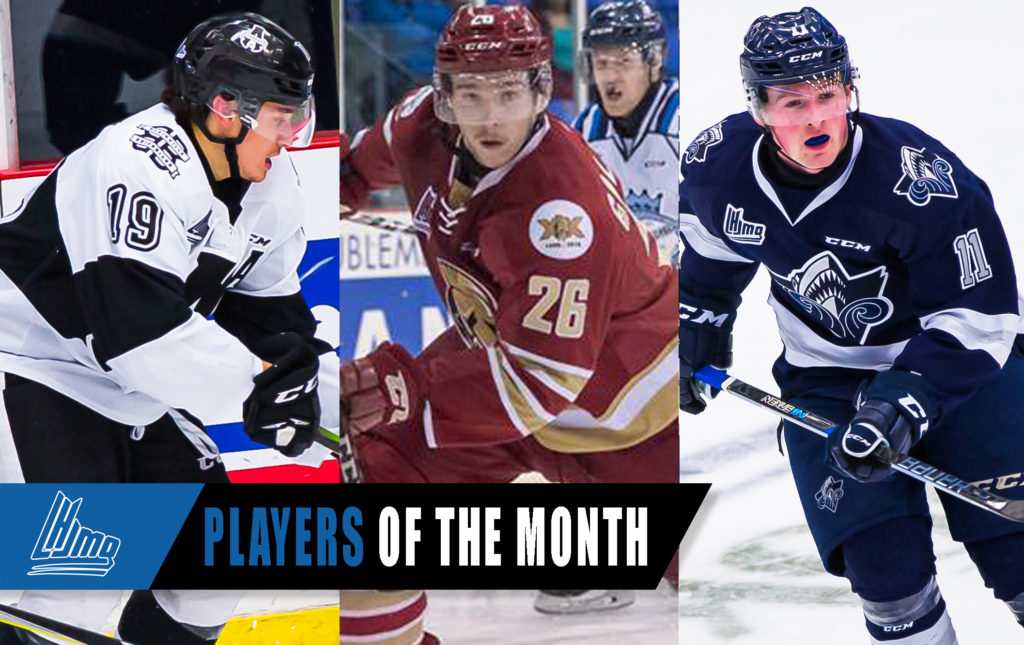 It’s now been three consecutive months that Barré-Boulet has taken the top Forward of the Month in the QMJHL title. But with an insane 2.23 point per game average in January, it is hard to find a player performing at a higher rate.

Not only did Barré-Boulet end last month with ten consecutive games with at least one point, but he also wrapped up January by getting two points or more in 11 of the 13 games he played in.

The Montmagny native found the back of the net 13 times in 13 games over the past month, but he most importantly scored three game-winners for the Armada. He now boasts a total of 12 game-winning goals this season, nearing the QMJHL record of 17 that’s co-held by Pat Lafontaine (Verdun | 1982-83) and Guy Rouleau (Hull | 1985-86).

Barré-Boulet is quite simply dominating the QMJHL right now. He leads the league with his 44 goals, as well as with his 47 helpers. His 91 points in 47 games give him a 29-point lead over the second-best scorer, his teammate Alexandre Alain, and his 62 points.

After being shutout in his first January game, Veleno ended the month on a tear by picking up at least one point in 10 consecutive games. As a matter of fact, he ended January just one point shy of having a two-point-per-game average.

He is the QMJHL player who picked up the most assists last month with a total of 17. Veleno actually has the second most assists in the league this season with 43, just four shy of current leader Barré-Boulet.

It’s also good to note that after scoring six goals in 31 games with Saint John, Veleno has now found the back of the net four times in 14 games since his trade to Drummondville, with all four coming in January.

Since he was traded from the Saguenéens to the Titan to kick off 2018, Galipeau has picked up 14 points in 11 games. The defenseman has been credited with at least one point in nine of his 11 games played, including four games in which he had multiple points.

Since his arrival in New Brunswick, the 20-year-old blueliner has also maintained an excellent +11 differential, while also firing 52 times on opposing goaltenders, an average of 4.7 shots per game in January.

Galipeau is dominating Q defensemen this season; he is in first place in points (54), in goals (19), in shots on goal (205), in shorthanded goals (2, in a tie) and also ranks second with a plus-minus differential of +29.

Paquette-Bisson is mostly known as one the league’s top defensive defensemen. As a matter of fact, the blueliner ended the month of January with an impressive +16 differential. He’s actually the defenseman who currently leads the QMJHL in that department this season, with a +30 ratio.

But in January, the Rosemère native showed off some offensive instincts with 10 points in 13 games played, including a new personal best with three points in an important 3-2 win over the Huskies. He also scored his very first game-winning goal in the 250th game of his career!

Following in the footsteps of his teammate Colten Ellis in December, it’s Alexis Lafrenière’s turn to represent Rimouski in the Rookie of the Month category.

Lafrenière put points up in nine of his team’s 11 games and ended the month of January with a total of seven games of two points or more. As impressive as his 18 points is Lafrenière’s +11 differential that came thanks to the fact that he ended no January games with a negative ratio.

This past January 26, the 16-year-old youngster scored his second hat trick of the season in a 5-2 win over Shawinigan. Lafrenière is topping many statistical categories among rookie skaters, including goals (29), points (56), game-winning goals (6) and plus-minus differential (+24).

The first month of 2018 was sort of a breakout one for Hrehorcak who, after closing off his first four months in the QMJHL with point totals of 3, 6, 3 and 6 points respectively, blew up for 15 points in January.

In his first game of the new year, the young Slovakian scored the first hat trick of his QMJHL career by netting every one of the Huskies’ goals in a 3-1 win over the Olympiques. On January 18th, he recorded another personal best when he picked up two goals and three assists in a 9-1 victory over the Foreurs.