QMJHL Players of the Month | February 2020

Drummondville Voltigeurs players of the month Moncton Wildcats
by
LHJMQ/QMJHL 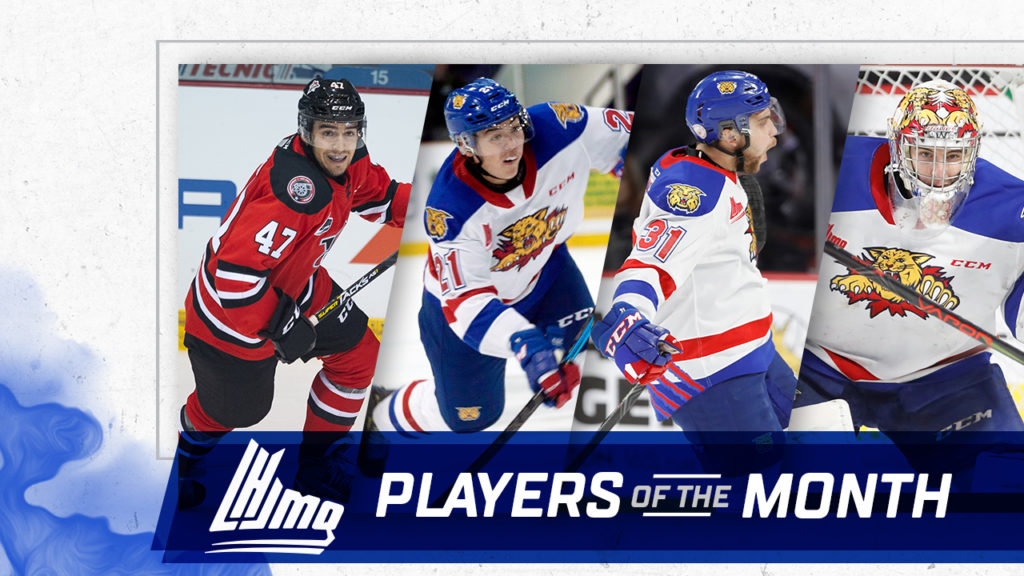 The Moncton Wildcats and their centerman Alexander Khovanov are two of the hottest topics in the QMJHL over the past few weeks as both continue to put up big numbers game after game. The 19-year-old from Kazan, Russia recorded a point in every game during the month and also found the back of the net in eight contests. Eight of his outings produced multiple points, including four-point efforts on February 1st and 14th versus Charlottetown and Saint John, respectively. One of the most understated aspects of the third-year veteran’s game might be his two-way play, as evidenced by his +24 rating on the month.

The second overall selection at the 2017 CHL Import Draft, Khovanov has already eclipsed his previous career highs with 32 goals and 92 points entering the regular season’s final month. The 2018 Minnesota Wild draftee begins March ranked second in the “Q” scoring race, second in assists and tied for first in +/- ratio.

Unable to play early in the season because of an injury, Mathias Laferriere stepped up once the calendar turned to 2020. After picking up 16 points in January, the 19-year-old Montrealer turned it up yet another notch in February, finding the scoresheet in nine of ten contests. That includes seven multi-point encounters, the high point being a four-point night versus Blainville-Boisbriand on the 8th. A 2018 draft selection of the St. Louis Blues, Laferriere’s explosive February leaves him with 48 points through 37 games.

The Eastern Conference-leading Wildcats went undefeated during the month of February. On the back end, one of the catalysts for this spectacular run was Jordan Spence. The second-year blueliner from Cornwall, PEI registered points in 10 of 13 games during the month, starting with a three-point effort against Charlottetown on the 1st. Every contest saw Spence achieve a +/- rating of even or better, leading to a monthly overall mark of +22, all while logging crucial minutes for the top defensive team in the league.

Last season’s QMJHL Rookie of the Year, Spence finished February in fifth place among defensemen in scoring with 49 points in 56 games, which matches his regular season total from 2018-19. His +49 rating is good for fourth in the league. Spence was a fourth-round selection of the Los Angeles Kings at the 2019 NHL Entry Draft.

Xavier Bernard, the fourth-year veteran form Mercier, Quebec helped lead Sherbrooke to a 10-1 record in February while producing a positive +/- rating in nine contests. In two of those outings the New Jersey Devils 2018 draftee earned a +5 rating, including a February 29th victory in Val-d’Or, which also saw Bernard post a career-high five points, tying a Phœnix franchise record for most points by a defenseman in a single game.

The future is in good hands in Drummondville, thanks in part to freshman rearguard Jacob Dion, who earns Rookie of the Month honors for the second time in three months. The 18-year-old from Stoke, Quebec put up points in nine of 11 February contests, including three consecutive two-point outings. Dion recorded his first two-goal game in the “Q” against Baie-Comeau on February 14th and tucked home his first ever game-winning goal on the 28th versus Gatineau.

Dion has vaulted into top spot in scoring among all rookies with 51 points in 60 games. He also sits in a tie for second in the QMJHL’s scoring derby for defensemen. A fourth-round selection of the Voltigeurs at the 2018 QMJHL Entry Draft, Dion led the Midget AAA Magog Cantonniers to back-to-back Telus Cup appearances in 2018 and 2019.

The first-overall selection at the 2019 QMJHL Draft, Joshua Roy knows a thing or two about rising to the occasion when the pressure begins to mount. The 16-year-old from Saint-Georges-de-Beauce, Quebec started the month slow before reeling off a six-game point streak to close out February. Included in this streak was his fifth game-winning tally of the campaign, scored on the 23rd versus Rouyn-Noranda. Thanks in part to Roy’s contributions, the Sea Dogs have punched their ticket to the postseason for the first time since 2017.

There hasn’t been much that Olivier Rodrigue hasn’t experienced between the pipes this season – other than losing, of course. The 19-year-old from Chicoutimi, Quebec continued his torrid pace into February, where he and his Wildcats teammates went undefeated, part of a 13-1 run for Rodrigue during the first two months of 2020. The fourth-year veteran put up performances of 30 or more saves on February 12th and 19th against Saint John and Rimouski, respectively. His fourth shutout of the season, on the 21st versus Rouyn-Noranda, represented a new personal single-season high in that department while also tying him for the league lead.

A second-round selection of the Edmonton Oilers at the 2018 NHL Entry Draft, Rodrigue’s record entering March is a phenomenal 28-7-0-0, while his GAA (2.47), save percentage (.913%) and win total all rank in the top five among QMJHL backstops.

Kevin Mandolese’s season to remember kept rolling along in February. Five games with 30 or more saves, six games with three goals allowed or fewer and a five-game personal win streak to close out the month reads like just another month at the office for the Eagles’ star stopper. All the while, Mandolese, who owns a 24-8-0-0 record thus far in 2019-20, continues to shatter his previous personal bests in GAA (2.31) and save percentage (.922%), figures that rank third and first overall in the QMJHL, respectively.