QMJHL Players of the Month | December 2021 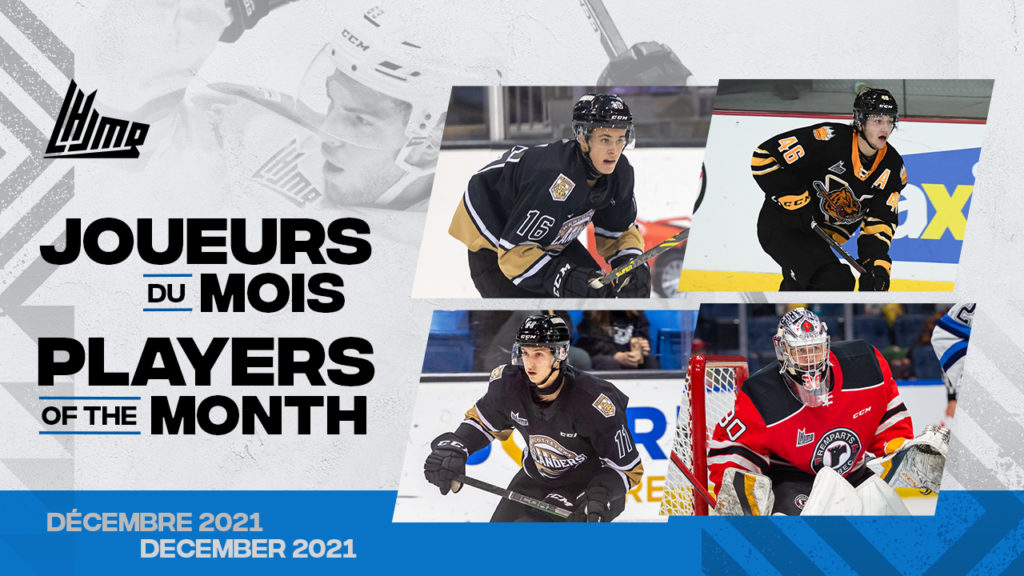 Leading the QMJHL standings at the extended holiday break, the Charlottetown Islanders know how to find the back of the net. One of several leaders in this regard is center Patrick Guay. The 19-year-old from Magog, Quebec made an impact during December by finding the scoresheet in seven of his nince games, all of them multi-point efforts. Included in this outburst was his second four-point game of the campaign, four powerplay tallies and a pair of game-winning goals. He was adept on the other side of the puck as well, finishing the month with a +/- rating of +9.

Guay has pulled into a four-way tie for second in the QMJHL scoring derby with 47 points in 31 games, while his 25 goals lead the circuit. The fourth-year veteran was invited to NHL training camp with the Arizona Coyotes this past fall.

The defending President Cup Champion Tigres remain a tough team to earn points from thanks to players like Frenette, who recorded a point in every December contest. The highlight of the month for the overager was a career-best five-point outing against the Halifax Mooseheads on the 3rd. Frenette’s 36 points in 30 games places him atop his club in scoring.

Vincent Sevigny will be afforded the opportunity to challenge for the 2022 Memorial Cup thanks to a recent trade to the tournament host Saint John Sea Dogs. However, his last month of play with the Tigres was a highlight in itself. The veteran blueliner made his way onto the scoresheet in every December matchup, including a four-point outing against the Cape Breton Eagles on the 9th. That was one of four multi-point efforts for Sevigny in the month. He finishes his career in Victoriaville with 97 points in 208 games, not to mention a 2021 President Cup title.

Sevigny heads to the Port City ranked fourth among all rearguards in scoring with 28 points in 25 games. He started the season with invites to NHL training camps from both the Toronto Maple Leafs and Ottawa Senators.

Trudeau posted nearly half of his 25 points on the season in the month of December, thanks to finding the scoresheet in seven of nine games leading into the break. The most impressive of these outings was a four-point effort against Cape Breton on the 18th, tying a single game career high for the 2021 Montreal Canadiens fourth rounder.

The last line of defense for the East Division leaders from Quebec remains as strong as ever thanks in part to Fabio Iacobo. The 20-year-old from Saint-Leonard, Quebec allowed two goals or less in each of his five starts during the month, which included four straight victories to close out the year. Perhaps most impressive were a pair of victories over Drummondville and Halifax on the 4th and 5th in which the fourth-year veteran turned aside 27 and 31 shots, respectively.

Iacobo, acquired by the Remparts from the Victoriaville Tigres during the off-season, features prominently on the league’s leaderboard, where he sits third in GAA (2.50) and tied for second in victories (12).

Though he boasted only six career QMJHL appearances entering the month, Robert gained a wealth of experience during a spectacular month of December. The rookie netminder allowed one goal or less in three starts, including a 23-save shutout, the first of his “Q” career, against Rouyn-Noranda on the 12th.

Jakub Brabenec is settling into life in the QMJHL rather comfortably. The 18-year-old from Jihlava, Czechia strung together four multi-point outings in a five-game span during the month, including a four-point contest against Rouyn-Noranda on the 3rd and a pair of three-point efforts against Drummondville and Saint John on the 8th and 11th, respectively. The latter of those two games was his last before making his way to Alberta, where he is representing the Czechs at the 2022 IIHF World Junior Hockey Championship.

A fourth-round selection of the Vegas Golden Knights at the 2021 NHL Entry Draft, Brabenec has vaulted into second in the “Q” rookie scoring derby with 32 points in 28 games.

Cormier hasn’t slowed down since being named November’s Rookie of the Month. Among his three multi-point outings was a five-point game against Cape Breton on the 9th and a four-point effort versus Halifax on the 3rd, all while maintaining a +7 rating during December. Cormier enters 2022 as the top rookie scorer in the league with 33 points in just 23 games.