QMJHL Players of the Month | December 2019 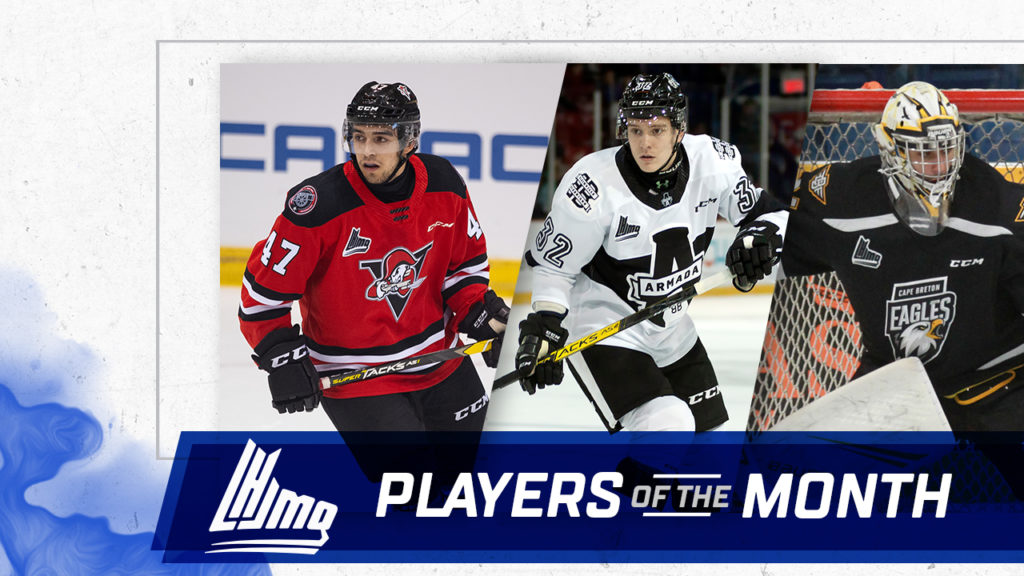 After making his way to the QMJHL from Russia last season and then dealing with a subsequent trade from Gatineau, Yaroslav Likhachev has made himself right at home while suiting up for the Blainville-Boisbriand Armada.

The 18-year-old winger from Yaroslav, Russia has helped put the Armada in the thick of the race for first place in the West Division thanks to four multi-point games during the month. Included in these performances were a pair of hat tricks over a three-game span, on December 28th and 31st against Quebec and Rouyn-Noranda, respectively. Additionally, the second-year forward achieved a +/- rating of zero or higher in eight of nine December contests.

Drafted in the first round of the 2018 CHL Import Draft by Gatineau, Likhachev has already bypassed his season totals from last year (12 goals, 24 points). Through 34 games entering the new year, his 21 goals place him tied for ninth overall in the league in that department, while his 36 points are good for second on the Armada. Likhachev was invited to NHL training camp with the Arizona Coyotes this past fall.

The Sherbrooke Phoenix has consistently remained at the top of the league’s overall standings this season in no small part thanks to solid secondary scoring from center Julien Anctil. The 18-year-old from Blainville, Quebec registered points in eight of ten December games, including a three-point outing against Quebec on the 1st and back-to-back multi-point matches against Baie-Comeau and Shawinigan on the 29th and 31st. A third-round selection of the Phoenix at the 2018 QMJHL Draft, Anctil enters January on a five-game point streak.

Entering this season, the Drummondville Voltigeurs knew they would need to lean on a largely untested defensive corps. Jacob Dion has proven to be one of those players than can be heavily leaned on as the Voltigeurs keep hanging around in the upper portion of the Western Conference standings.

The 18-year-old from Stoke, Quebec recorded points in eight of nine games during the final month of 2019, with three of his five goals coming on the man advantage and three games being multi-point efforts. This included a career-high four-point contest against Moncton on December 7th.

A freshman on the Volts blueline, Dion’s 30 points in 37 games place him in a tie for third in rookie scoring and second overall among first-year rearguards. A fourth-round selection of the Voltigeurs at the 2018 QMJHL Entry Draft, Dion led the Midget AAA Magog Cantonniers to back-to-back Telus Cup appearances in 2018 and 2019.

The Cape Breton Eagles are poised to make a long playoff run this spring and one of its cornerstones is veteran defenseman Nathan Larose. The 19-year-old from Mirabel, Quebec put up points in six of seven December contests including three multi-point outings. The third-year rearguard did not record a single minus performance during the month, en route to an overall rating of +8 rating for December. Larose currently sits tied for seventh among defensemen with 26 points in 34 games.

As we’ve just showed you in the previous section reserved to the “Defenseman of the Month”, first-year Drummondville Voltigeurs blueliner Jacob Dion was electrifying throughout the month of December. For all of the reasons mentioned above, it is with no surprise that he is also named “Rookie of the Month” for December.

After entering the league as a highly regarded prospect, Val-d’Or Foreurs center Justin Robidas seems to have found his groove as the calendar turns to 2020. The 16-year-old, originally from Plano, Texas, recorded three multi-point games during December. The highlight of his young “Q” career occurred on December 6th, when he scored twice and added three assists against Rimouski. Robidas rounded out the year by posting three points over Gatineau on the 31st.

Selected second overall by the Foreurs at the 2019 QMJHL Draft, Robidas averaged over a point and a half per game with Quebec Midget AAA Champions Magog last campaign.

To say that Kevin Mandolese has enjoyed an uptick in his QMJHL career in 2019-20 would be an understatement. The 19-year-old from Blainville, Quebec returned from injury early in December and put together a string of strong performances, particularly towards the end of the month.

On four occasions, the fourth-year veteran made 30 or more saves in a contest, including a 4-0 triumph over the Charlottetown Islanders in which he kicked aside 32 shots for his first shutout of the season and third victory in a row. In seven of his eight appearances during the month, Mandolese allowed three goals or fewer.

A first-round selection of Cape Breton at the 2016 QMJHL Draft, Mandolese enters the new year ranked third in the league in both GAA (2.50) and save percentage (.916%), both of which represent career highs for him. Mandolese was a sixth-round choice of the Ottawa Senators at the 2018 NHL Entry Draft.

Playing behind a developing Armada defensive group has been a task Emile Samson has embraced. The 20-year-old from Levis, Quebec kicked aside 30 or more shots in five of seven appearances during the month, including 37 and 35-save victories over Shawinigan and Rouyn-Noranda on December 6th and 31st, respectively. Samson, who ended the month on a three-game win streak, currently sports a career-best save percentage of .912%, placing him in a tie for fourth in the QMJHL in that department.