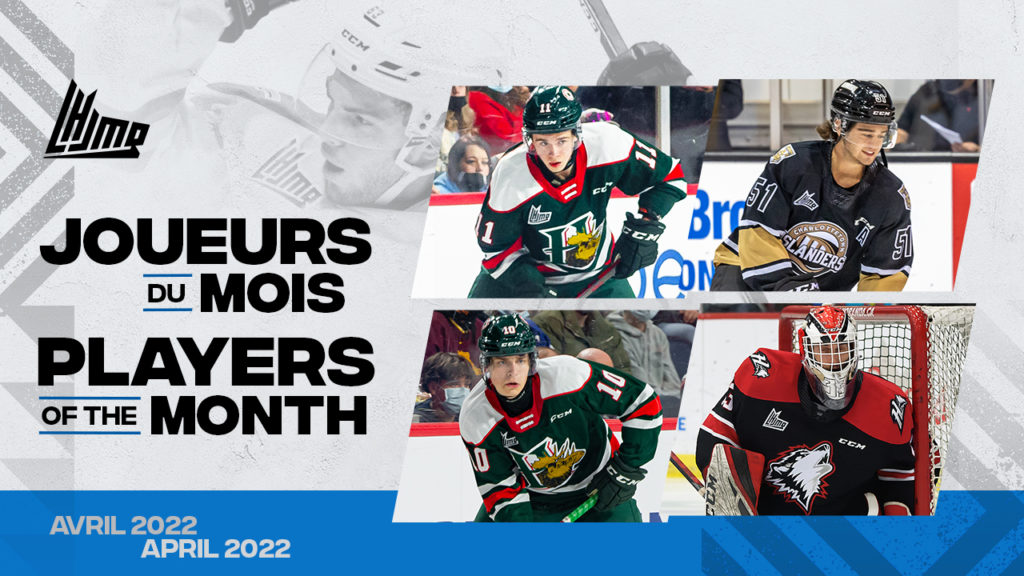 Jordan Dumais – Halifax Mooseheads – 13GP, 15G, 22A, 37Pts
There’s hot, then there’s Jordan Dumais. The Ile-Bizard, Quebec native, set a new franchise record for points in a month and made the league his own personal playground. The second-year forward ended the season on a 12-game point streak, posting multiple points in eleven of those games, including a career best six-assist outing versus Cape Breton on the 19th, part of a week that saw him register 14 points in three games. Not satisfied with merely dishing the puck off, he also recorded four multi-goal games, including his first career QMJHL hat trick on April 8th against Moncton.

Dumais, who is eligible for the 2022 NHL Entry Draft, no doubt turned some heads among scouts, ending the season with a team-leading 109 points, good for third overall in the league. His 70 assists placed him in a three-way tie for first place in the circuit.

As the Shawinigan Cataractes enter the postseason with their eyes fixed on an extended run, Mavrik Bourque is truly locked in. Bourque ended the campaign with points in all but one game in which he appeared this season, part of a spectacular 24-game point streak, that included five multi-point outings in April. His final game of the campaign was truly exceptional, a two-goal, six-point outing against the Val-d’Or Foreurs on April 29th. The 2020 Dallas Stars first-rounder ends the regular season with 68 points in 31 games.

The Charlottetown Islanders rode a consistently successful regular season to the Maritimes Division crown, in large part due to the impact of its star defenseman, Lukas Cormier. The 20-year-old from Sainte-Marie-de-Kent, New Brunswick put up points in all but two games since the first of April. That included five multi-point outings and a five-game goal-scoring streak. In 12 of those games, the fourth-year veteran achieved a +/- rating of even or better.

The late season surge allowed Cormier to claim the QMJHL scoring title among defensemen with 81 points in 62 games. The slick rearguard was claimed by the Vegas Golden Knights in the third round of the 2020 NHL Entry Draft.

The Quebec Remparts claimed the Jean-Rougeau Trophy as regular season champions and earned the lowest goals against to boot. Evan Nause played a major role in both of those accomplishments. The 2021 Florida Panthers draftee ended the campaign on a ten-game point streak, including multiple points on six occasions in April and May. From April 1-9th, the second-year blueliner posted four consecutive two-point outings.

The 17-year-old from Saint-Constant, Quebec came alive in the final month of the campaign recording points in 11 of 13 games. That included four two-point games (three of which occurred in succession) and two three-point outings. On the other side of the puck, Cataford was just as efficient, finishing even or better in the +/- category on all but one occasion.

Selected sixth overall by Halifax at the 2021 QMJHL Draft, Cataford finished the season ranked third among all rookie scorers with 46 points in 62 games. Prior to arriving in the Q, he was a star in the U15 AAA ranks with the College Charles-Lemoyne organization.

David Spacek’s strong first season was one factor in the rise of the Phoenix from last place in 2020-21 to top spot in the Western Conference this year. The rookie defenseman was his usual model of consistency over the past few weeks, scoring a point in 10 of 14 games. In addition, the 2022 NHL Draft eligible rearguard posted a season-high +4 rating against Drummondville on April 10th. Spacek finished the campaign as the leading scorer among rookie defenseman in the QMJHL with 50 points in 57 games.
_

Samuel Richard made sure his final month of regular season play in the QMJHL was one to remember. The 21-year-old from Sainte-Catherine, Quebec reeled off a five-game winning streak mid-month, part of a run of six victories in seven games. The third-year veteran allowed three goals or less in every start he got in April, stopping 30 or more shots on four occasions. In particular, he managed to frustrate his team’s closest rival, defeating Val-d’Or three times during the month, including shutouts on April 9th and 21st, respectively.

A sixth-round selection of the Huskies at the 2017 QMJHL Draft, Richard completed his overage season by notching 24 victories, a 2.69 GAA and save percentage of .918%. His five shutouts earn him a second-place tie in the QMJHL in that department.

All Thomas Couture and his Sea Dogs did in the final month of the season was win. While the 2022 Memorial Cup hosts entered the postseason on a 15-game streak, Couture allowed two goals or fewer in seven outings since April 1st, including a 37-save triumph over Quebec on April 10th and a 22-save shutout versus Cape Breton on the 16th. This spectacular conclusion to the season allowed Couture to earn the highest win total in the Q this campaign (29).