Zachary Bolduc Quebec Remparts player of the week
by
LHJMQ/QMJHL 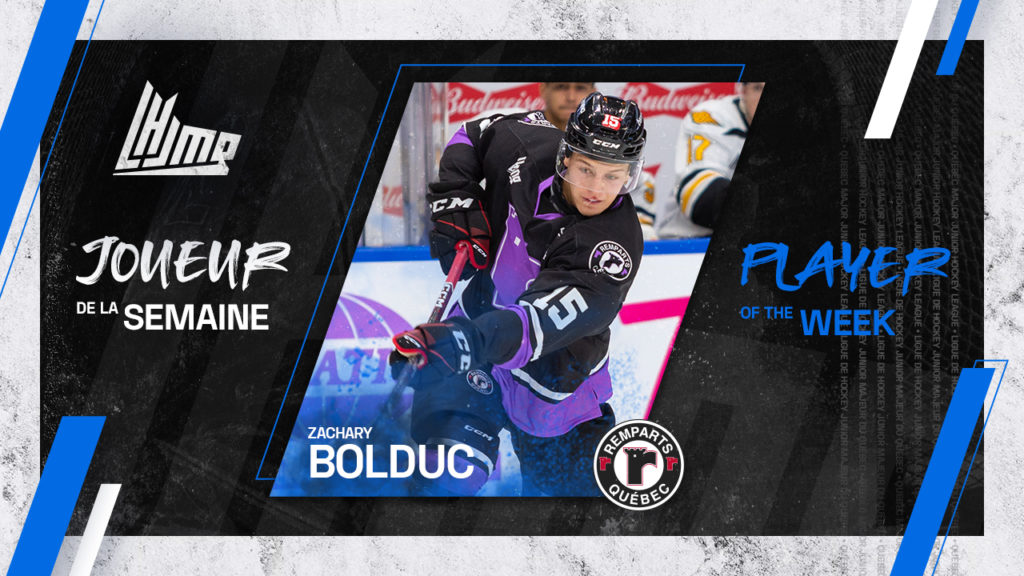 The latest QMJHL Player of the Week is Quebec Remparts winger Zachary Bolduc. The 19-year-old from Trois-Rivieres, Quebec scored three times and added five assists as the Eastern Conference leading Remparts went unbeaten in a pair of home games.

On Saturday afternoon, Bolduc helped drive the Remparts offense into high gear, netting the eighth hat trick of his QMJHL career while adding an assist in a 9-2 victory over the Cape Breton Eagles. For his efforts, Bolduc was named the game’s second star.

The fourth-year veteran would take home second star honors again on Sunday afternoon. This time, he’d play the role of set-up man, registering four assists, including a helper on the first period’s eventual game-winner. The Remparts skated away with a 7-1 triumph over the Drummondville Voltigeurs, the seventh straight win for the club. Bolduc would also finish the afternoon with a +/- rating of +4.

Drafted in the first round, 17th overall, by the St. Louis Blues at the 2021 NHL Entry Draft, Bolduc currently sits ninth in league scoring with 21 points in just ten games. Bolduc’s third assist in Sunday’s win was his 200th regular season point in the QMJHL.