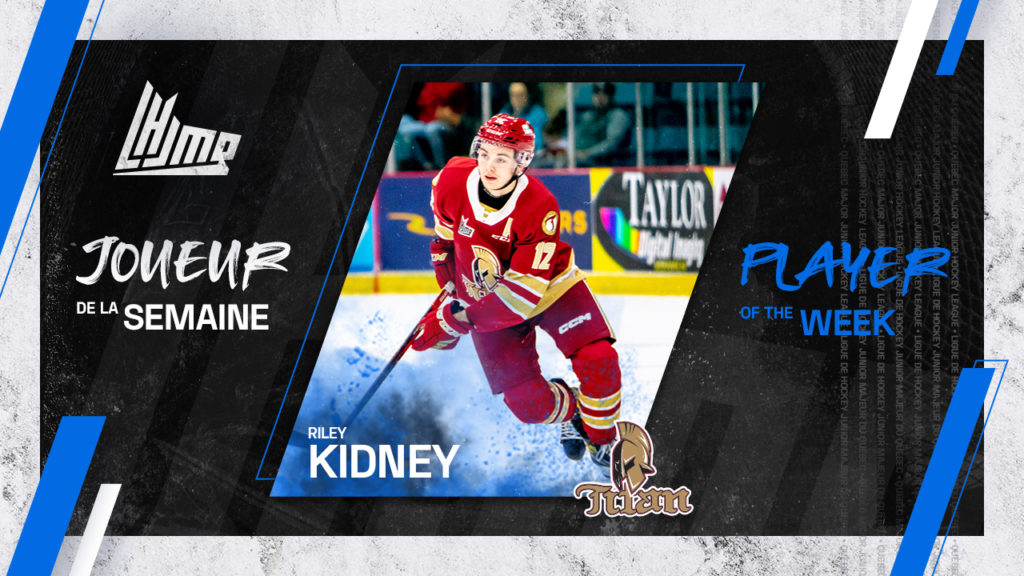 The latest Player of the Week accolades in the QMJHL are awarded to center Riley Kidney of the Acadie-Bathurst Titan. In a pair of home games, the 19-year-old from Enfield, Nova Scotia scored four times and added three assists as the Titan went undefeated.

On Friday night, Kidney scored twice, including a key third period insurance tally, and added an assist in Acadie-Bathurst’s 5-3 triumph over the Blainville-Boisbriand Armada. The fourth-year veteran, who finished the contest with a +2 rating, was named the game’s second star.

Kidney would be back in top form on Saturday night. His season high four-point outing included a pair of helpers and two more goals, including the game-winner 3:05 into the overtime period, as the Titan earned a 5-4 victory over the Baie-Comeau Drakkar. This time, Kidney would be named the first star of what proved to be a back-and-forth contest.

Kidney, fresh off a 100-point campaign in 2021-22, finds himself ninth in the league scoring derby with 26 points in 16 games. A member of Team Canada’s gold medal winning squad at the 2022 IIHF World Junior Hockey Championship this past summer, he was a second-round selection of the Montreal Canadiens at the 2021 NHL Entry Draft.