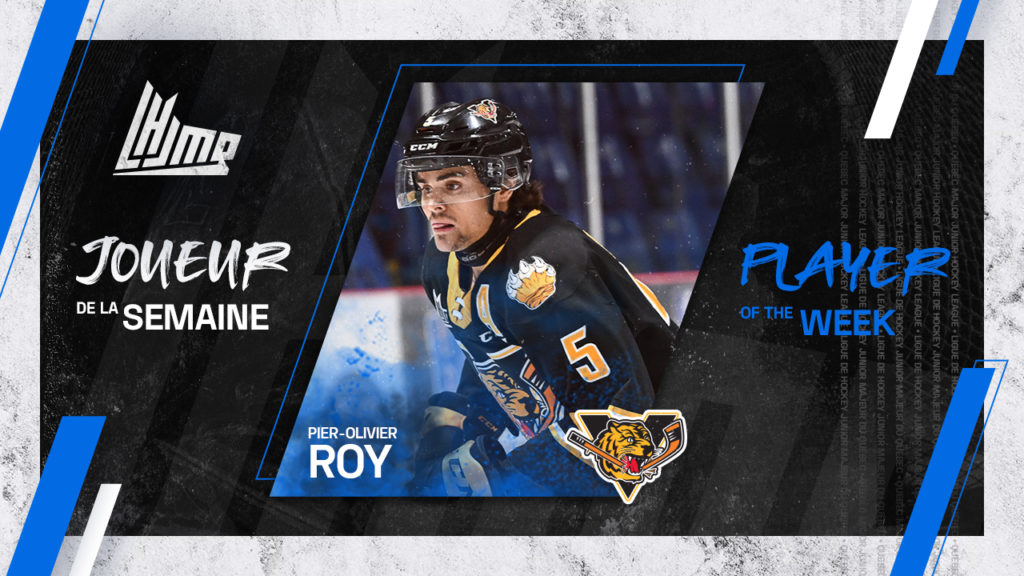 The latest QMJHL Player of the Week is Victoriaville Tigres defenseman Pier-Olivier Roy. In three games, the 18-year-old from Adstock, Quebec registered seven points, all assists, as the Tigres went unbeaten on the week.

On Wednesday night at home, Roy recorded assists on the first three Tigres tallies of the game, including a helper on the eventual game-winner, as Victoriaville took down the first-place Quebec Remparts by a score of 4-1. The third-year rearguard, who also finished the evening with a +2 rating, was named the game’s first star.

Back on home ice Friday night, the Tigres assistant captain kept on rolling, once again assisting on the eventual game-winner. This was part of a two-point effort for Roy in the Tigres’ 4-1 triumph over the Gatineau Olympiques, giving him multiple points in three straight games.

Capping of the homestand on Saturday afternoon, Roy would make it four multi-point efforts in a row, this time producing another pair of assists in the Tigres’ 8-0 win over the Chicoutimi Saguenéens. He would once again finish the game with a +2 rating, while his club earned at least a point for the fifth consecutive outing.

Roy, the seventh overall selection at the 2020 QMJHL Draft, sits second in league scoring among defensemen with 29 points, including a circuit-best 28 assists in 25 games. As a rookie, he was a member of Victoriaville’s 2021 President Cup Championship squad.