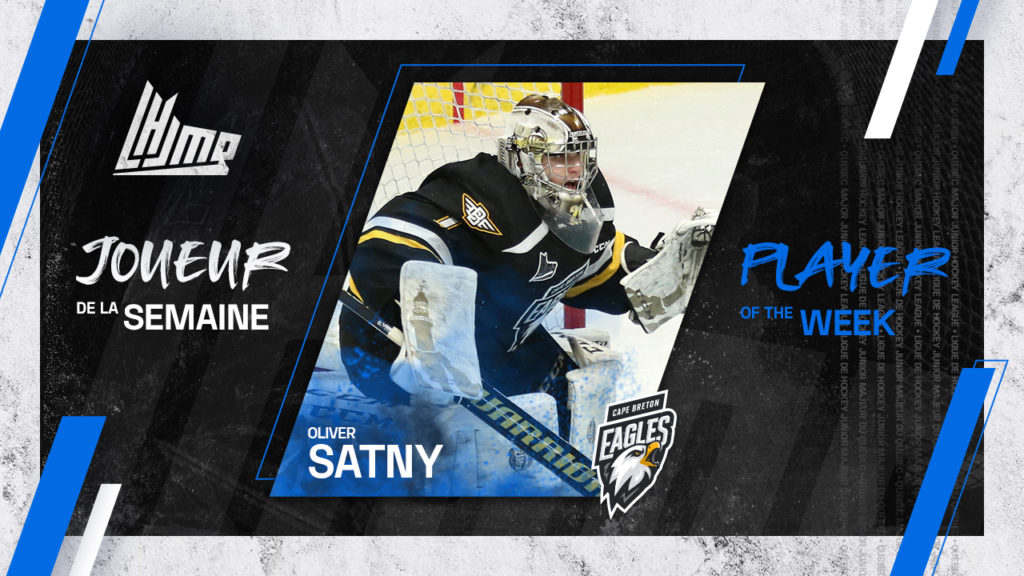 The latest QMJHL Player of the Week is goaltender Oliver Satny of the Cape Breton Eagles. In three games, the 19-year-old from Tabor, Czechia went 3-0-0-0 with one shutout, a 1.67 goals against average and a save percentage of .951% in the Eagles’ perfect week.

On Thursday night in Charlottetown, Satny was flawless, turning aside all 37 shots his former team directed at him in a 4-0 victory over the Islanders. For the sophomore netminder, who was the easy choice for first star of the game, it was his third shutout in just eight appearances with the Eagles to that point.

Back at home on Sunday afternoon, Satny kept rolling, making 30 saves in a 4-3 triumph over the Chicoutimi Saguenéens. Also earning an assist on the day, Satny ran his personal win streak to four games while the Eagles registered their first six-game winning streak in four seasons.

Satny, acquired from Charlottetown by the Eagles on the 18th of October, sports a 5-6-0-0 record on the season with a 3.10 GAA and .910% save percentage, while his three shutouts lead the league. He was invited to NHL training camp with the Buffalo Sabres earlier this season.