josh lawrence player of the week Halifax Mooseheads
by
LHJMQ/QMJHL 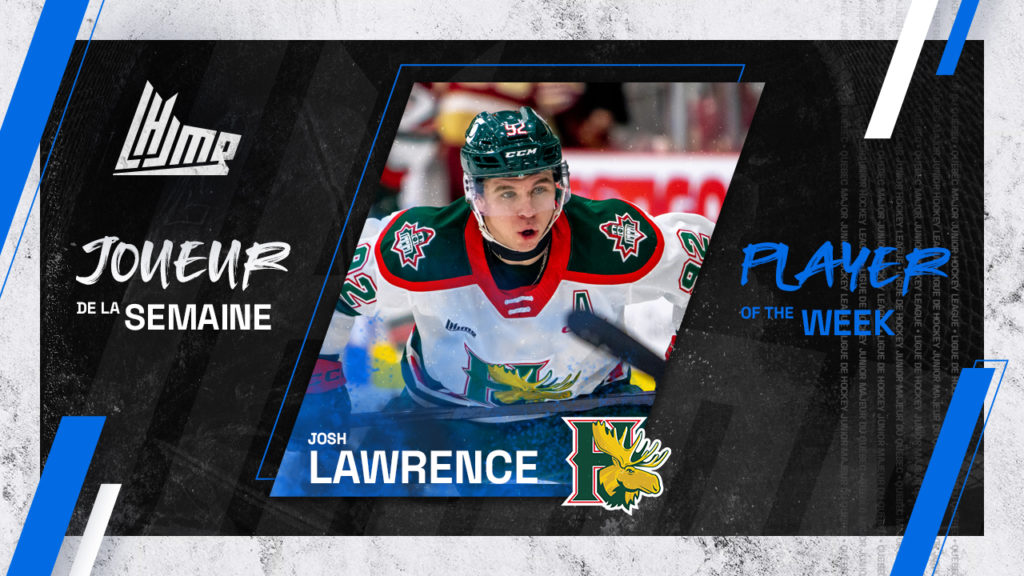 The latest QMJHL Player of the Week is Halifax Mooseheads center Josh Lawrence. In three road games, the 20-year-old from Fredericton, New Brunswick scored four times and added six assists as Halifax went 2-0-1-0 during the final week of 2022.

On Wednesday night in Bathurst, Lawrence registered two assists, including a helper on the eventual game-winner, during the Mooseheads’ 6-1 triumph over the Acadie-Bathurst Titan. Lawrence was named the second star of the contest.

On Friday night in Sydney, Lawrence recorded another assist, extending his latest point streak to four games. The Mooseheads’ would drop a 6-5 overtime decision to the Cape Breton Eagles in the first of back-to-back games against the provincial rivals.

Lawrence and the Mooseheads regrouped in a big way on Saturday afternoon. The fifth-year veteran exploded for a career-high seven-point game on four goals and three assists, establishing a new Mooseheads franchise record for most points in a road game. He was the obvious choice as first star in a convincing 11-3 victory over the Eagles.

Lawrence sits sixth in the league scoring derby with 53 points in 36 games. Acquired by the Mooseheads from the Blainville-Boisbriand Armada in November, Lawrence had spent his first four seasons in the Q with the Saint John Sea Dogs, where he became a Memorial Cup Champion in 2022.