jordan dumais player of the week Halifax Mooseheads
by
LHJMQ/QMJHL 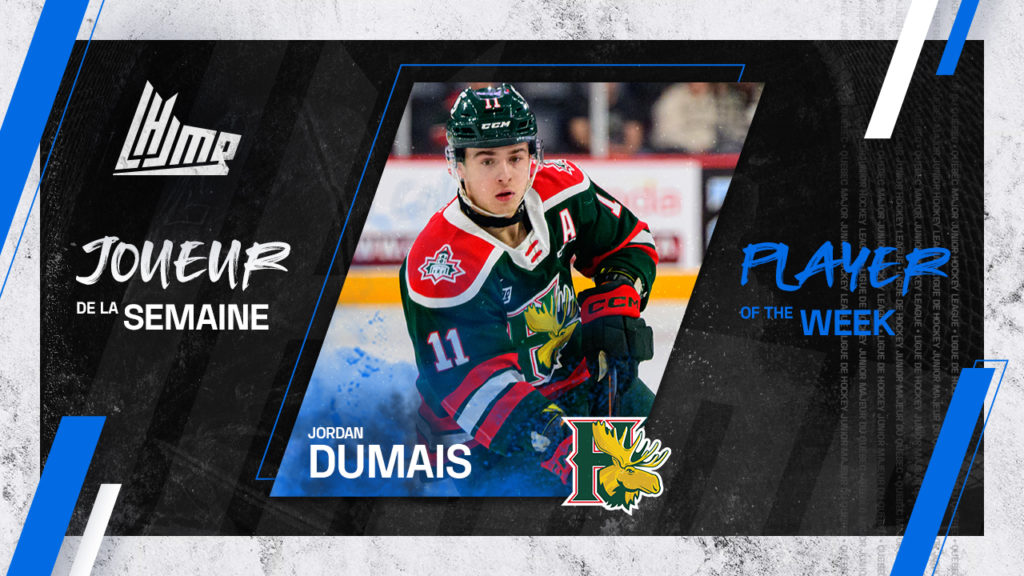 The latest QMJHL Player of the Week is Halifax Mooseheads winger Jordan Dumais. In three games, the 18-year-old from Ile Bizard, Quebec scored six times and added a pair of assists as the Maritimes Division-leading Mooseheads took five of six points.

On Thursday night in Charlottetown, Dumais scored twice, including the eventual game-winner late in the second period, as the Mooseheads overcame a first period deficit to defeat the Islanders 4-1. For his efforts, the Halifax forward was named the game’s first star.

Back at home Saturday night, the third-year veteran registered a second period assist and ended the night with a +/- rating of +1 but would eventually lose to the Rouyn-Noranda Huskies by a score of 3-2 in the shootout. Despite the setback, Dumais’ point streak to start the season increased to eight games.

He would make it a nine-game point streak in grand style on Sunday afternoon. Dumais’ five-point effort, including the first four-goal game of his QMJHL career, would carry Halifax to a 6-3 home-ice triumph over the Acadie-Bathurst Titan. He would be an easy choice for first star of the contest.

Dumais, who finished third in league scoring with 109 points last season, currently sits third in goals (9) and second in points (22) entering the last full week of October. His breakout campaign earned him a selection by the Columbus Blue Jackets in the third round of the 2022 NHL Entry Draft.