Félix Lafrance Chicoutimi Saguenéens player of the week
by
LHJMQ/QMJHL 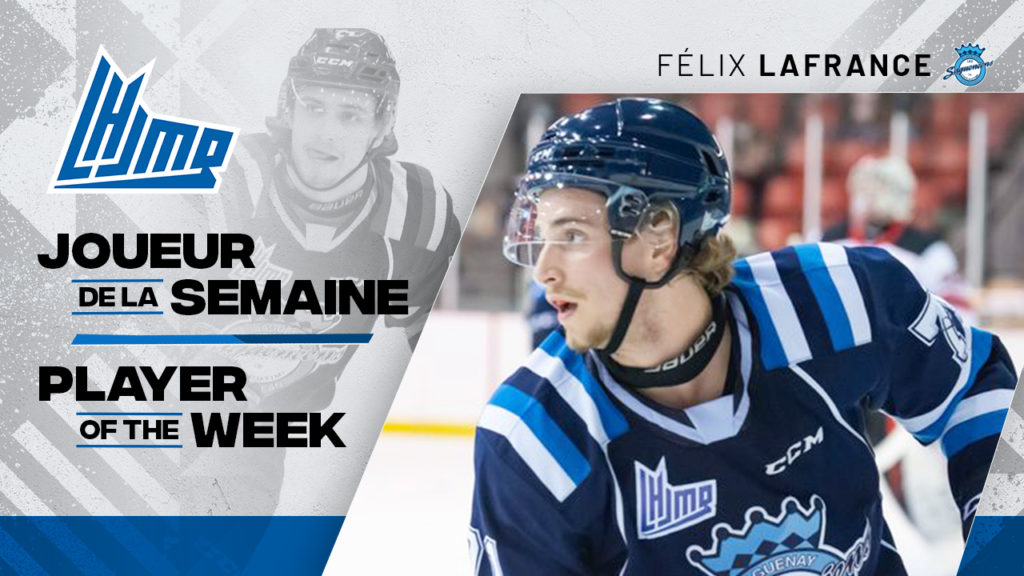 The latest talent to take home QMJHL Player of the Week honors is Chicoutimi Sagueneens winger Felix Lafrance. In three games, the 20-year-old from St-Eustache, Quebec scored six times and added a pair of assists while his club went 2-1-0-0 on the week.

On Friday night at home, Lafrance, who had missed his club’s first two games of the regular season, made up for lost time with a goal and rating of +2 in Chicoutimi’s 3-0 triumph over the Gatineau Olympiques. That performance earned him the third star of the contest.

Back home on Saturday afternoon, the Sags went down to defeat at the hands of the Sherbrooke Phoenix by a score of 5-3. However, Lafrance gave a valiant effort, pacing the Chicoutimi attack with his second career QMJHL hat trick. He would cap off the game by being named first star.

On Sunday afternoon in Baie-Comeau, Lafrance picked up where he left off by sniping the game’s first two goals. By the time the contest was over, the fourth-year veteran had collected four points, including the 100th of his QMJHL career, and the Sagueneens had earned a 4-0 shutout victory over the Drakkar. Once again, Lafrance was named first star of the game.

This weekend’s offensive outburst has vaulted Lafrance into second place in the Sagueneens scoring race. A second-round selection of the Blainville-Boisbriand Armada at the 2017 QMJHL Entry Draft, Lafrance has helped the Sags stay in contention in what has been a contentious race early on in the East Division.