player of the week
by
LHJMQ/QMJHL 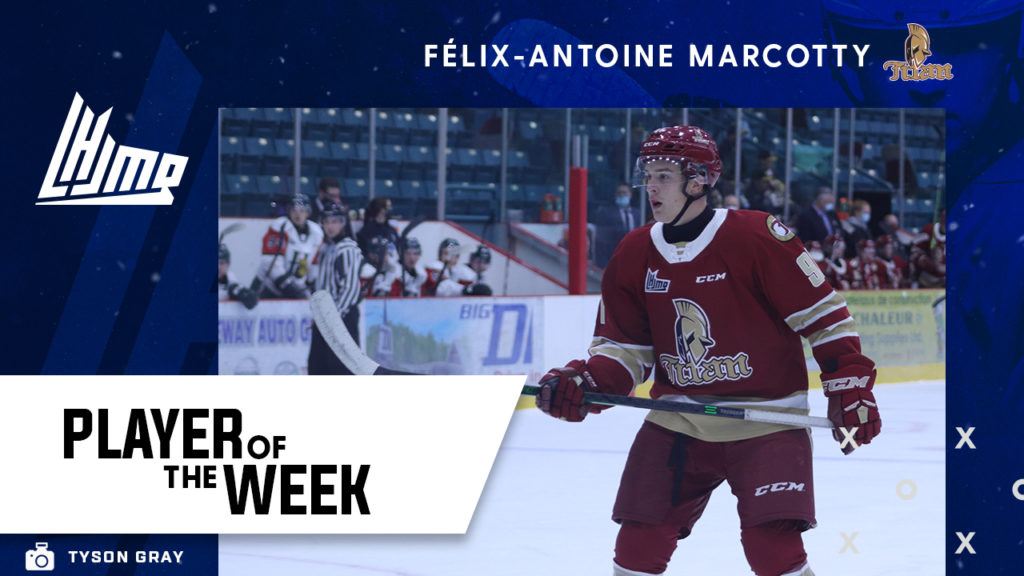 The latest QMJHL Player of the Week is Felix-Antoine Marcotty of the Acadie-Bathurst Titan. In a pair of home games against the Cape Breton Eagles, the overage winger from Saint-Jean-sur-Richelieu, Quebec scored once and added five assists as the Titan went 2-0.

On Friday night, the Eagles would race out to a 3-0 lead after just over 12 minutes of play. However, the Titan would spark a comeback in large part due to the play of Marcotty, who chipped in with three assists, including one on his club’s insurance marker in an eventual 6-3 triumph. For his efforts, the fourth-year veteran would be named the game’s third star.

Saturday afternoon’s game would be a one-sided affair. Marcotty would assist on the eventual game winning tally, part of another three-point outing, as the Titan skated away with an 8-1 victory over the Eagles. Among Marcotty’s three points was the 100th of his QMJHL regular season career early in the second period as well as his first goal of the campaign, scored midway through the same frame. The pair of weekend wins leave the resurgent Titan with an impressive 5-0-0-1 record.

Marcotty was acquired by the Titan from the Chicoutimi Sagueneens, who drafted him in the second round of the 2016 QMJHL Draft, during the off-season. After a career-high 41-point effort with Chicoutimi last season, Marcotty is on pace to better that mark early on with eight points in his first six games of the 2020-21 campaign.