Etienne Morin player of the week Moncton Wildcats
by
LHJMQ/QMJHL 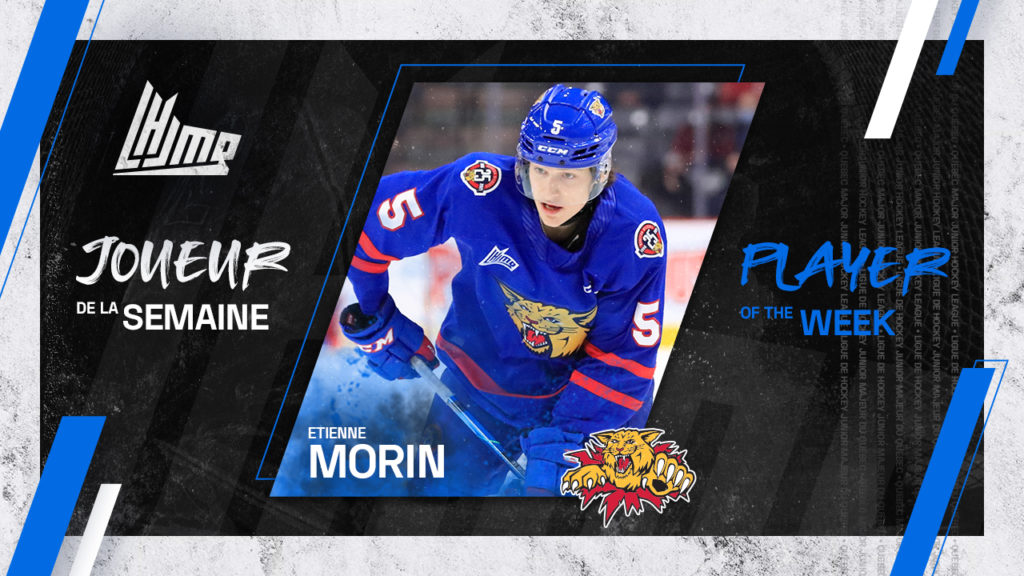 The latest QMJHL Player of the Week accolades go to Moncton Wildcats defenseman Etienne Morin. In a trio of games, the 17-year-old from Salaberry-de-Valleyfield, Quebec scored three times and added three assists as the Wildcats went 2-1-0-0 on the week.

On Thursday night at home, Morin assisted on the opening goal of the game before collecting his 11th goal of the season early in the second period, paving the way for a 3-2 Wildcats triumph over the Acadie-Bathurst Titan. The sophomore rearguard would finish the evening with a +2 rating while dishing out five hits.

On Friday night in Saint John, Morin scored twice and added an assist for his second three-point game of the season as the Cats took down the Sea Dogs by a score of 8-5. Once more, Morin ended the night with a +2 rating while the Wildcats earned a point for the third game in a row.

On Sunday afternoon in Sydney, the Wildcats modest point streak ended with a 5-3 defeat at the hands of the Cape Breton Eagles. However, Morin would record an assist on a third-period Moncton tally, stretching his personal point streak to seven games

Morin, a second-round selection of the Wildcats at the 2021 QMJHL Draft, currently leads all QMJHL defensemen in goals with 13 and sits fourth in points with 31. Rated as a ‘B’ prospect ahead of the 2023 NHL Entry Draft, Morin is currently on pace to break the Wildcats franchise record for most goals scored by a defenseman in a single season, which is 25, set by Keith Yandle in 2005-06.