Elliot Desnoyers player of the week Halifax Mooseheads
by
LHJMQ/QMJHL 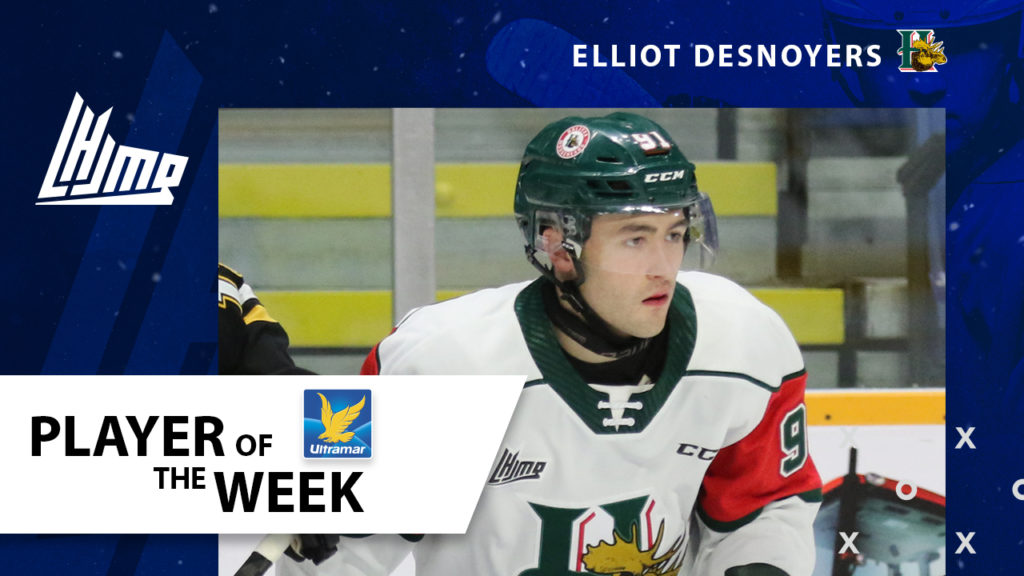 The latest QMJHL Player of the Week is Halifax Mooseheads center Elliot Desnoyers. In a pair of road games, the 18-year-old from Saint-Hyacinthe, Quebec scored four times and chipped in a pair of assists as the Moose went 1-1.

On Friday evening in Cape Breton, the Eagles took the first half of the weekend series from their provincial rivals by a score of 5-3. Despite the setback, Desnoyers collected two assists and recorded a +1 rating on the night.

The following night in Sydney, Desnoyers would have the biggest game of his career, scoring four times and ending the night at +3 in Halifax’s convincing 10-2 triumph over the Eagles. It was the first four-goal outing of his career and the first by a Mooseheads’ player since Filip Zadina accomplished the feat in February of 2018. For his efforts, Desnoyers was unsurprisingly named the game’s first star.

This offensive output has vaulted Desnoyers, a first-round selection of the Moncton Wildcats at the 2018 QMJHL Draft, into a tie for third in the QMJHL in goals scored on the season with six in eight games. Overall, he has produced 12 points and his past three games have been multi-point efforts. Earlier this month, Desnoyers was chosen in the fifth round of the 2020 NHL Entry Draft by the Philadelphia Flyers.