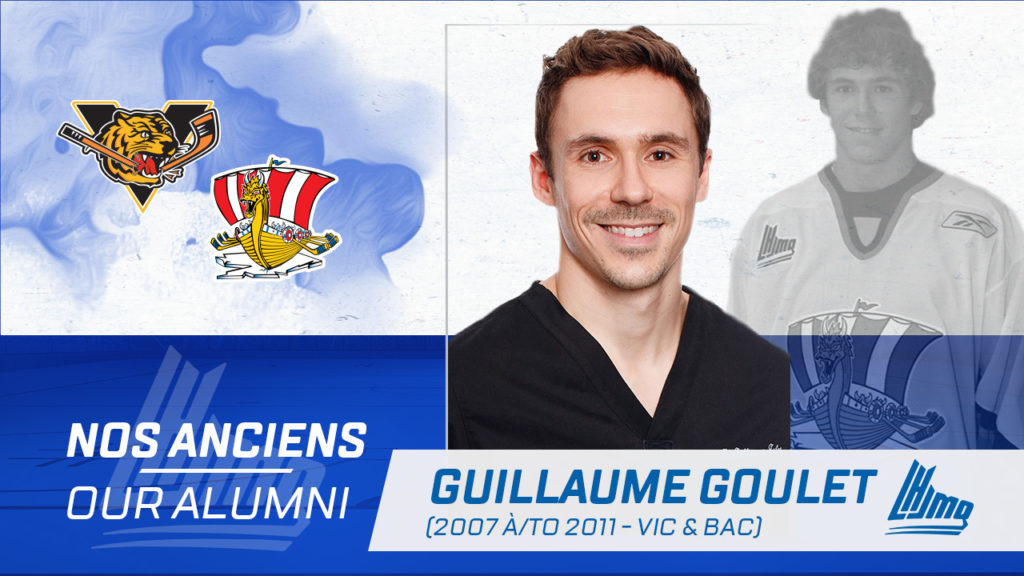 The ex-Drakkar player feels he’s now back home. After a brilliant career in the QMJHL, the Quebec City native decided to settle in where he started his junior hockey.

The 45-goal scorer in 2008-2009 became part owner of a dentist clinic in Baie-Comeau three years ago. After a year of podiatric studies at the Université du Québec à Trois-Rivières (UQTR), Goulet opted to switch for the dentistry program at Université Laval, in Quebec City. A decision he would never regret.

“Things went pretty well in Trois-Rivières, but my childhood dream was to become a dentist,” mentions the ex-right winger. “The [UQTR] Patriotes really wanted me to play for them, but I had already decided to put hockey aside to concentrate on my studies”, explains Goulet.

“Playing hockey is awesome, but when you have high expectations in life, it becomes very difficult to perform well on and off the ice,” says the 28-year-old. “Being from Quebec City, it was like coming home for me. It had been a while since I had stayed in my hometown, so it was great to be back.”

Guillaume Goulet is convinced he made the right move by switching his school and study field. “I’ve always been a very meticulous person. I pay close attention to details and I like a job well done. Those are all important qualities for a dentist”, explains the winger who also played for the Victoriaville Tigres during his QMJHL stint.

“Being able to give people great care and to make them feel better is the aspect I love most about my job. It’s great to be in a position to improve their quality of life”, he adds.

Goulet says he’s really grateful towards the QMJHL for its grants and scholarships. “Those were a big help for me. It’s a big pat on the back and it allows players to pursue university degrees following their junior careers”, he explains. “We all know that a very small number of players make it to the NHL level, so it’s crucial to prepare for a career after hockey “.

After getting his doctorate, Guillaume Goulet and his girlfriend decided to move back to the Côte-Nord region to settle down. “We both studied at Université Laval in Quebec City, but we both wanted to come back to Baie-Comeau, where [my girlfriend] is from. We love the area and the pace of life there.”

Life got even better for him when he became a part-time assistant coach with the Baie-Comeau Drakkar this season. “I stayed away from hockey for a few years because I needed a break. But my love and my passion for the game are still there,” says Goulet.

“I’m a little bit like a godfather to the kids. I try to help them both on and off the ice. I spend an hour with them each week and I’m also kind of a big brother for them,” explains the ex-player with a big smile. “I love hitting the ice again and being able to give something back to these young players who represent the Drakkar’s future.”