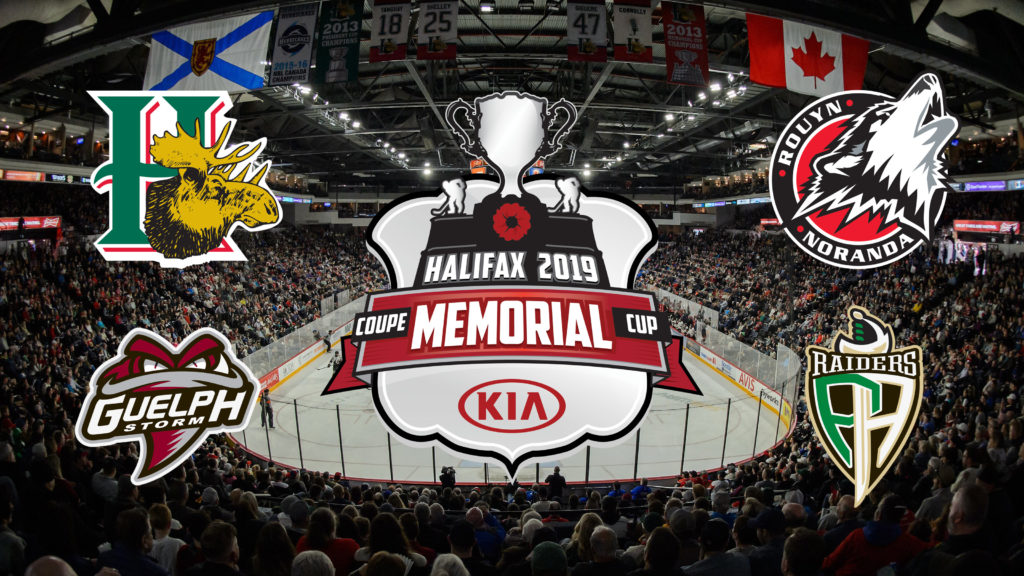 One of the hardest trophies to win in all of sports is up for grabs once again starting tonight.

That’s when the home rink of the QMJHL’s Halifax Mooseheads, in Nova Scotia, acts as the backdrop for the opening game of the 2019 Memorial Cup Presented by Kia. It all begins at 8PM AT when the hosting Mooseheads take on the Western Hockey League Champion Prince Albert Raiders in the first of six round robin encounters between the four participating teams.

Without further ado, here is a look at those teams and how their journey led them to the shores of the Atlantic Ocean.

The Mooseheads will enjoy all of the perks that come with playing at home at the 2019 Memorial Cup. Ironically, the club began the season on a daunting 15-game road trip to start the 2018-19 regular season as their home rink underwent the final stages of its renovations. Unfazed by the unbalanced start of its campaign, it was the club’s 12-3 record over that span that helped propel them to top spot in the Maritimes Division, a title it clinched on the final day of the season.

During the regular season, the club was led by a quartet of 30-goal scorers in Asselin (a league-best 48), New York Islanders draft pick Arnaud Durandeau (38), projected 2019 NHL first-rounder Raphael Lavoie (32) and Anaheim Ducks prospect Benoit-Olivier Groulx (31). In Asselin and captain Antoine Morand, they also benefitted from the championship experience both of those players brought to the rink, having won the 2018 Memorial Cup in Regina, Saskatchewan with the Acadie-Bathurst Titan. The leader on the blueline was 2017 Red Wings second-rounder Jared McIsaac, who collected 62 points in 53 games while also representing Team Canada at the 2019 IIHF World Junior Hockey Championship. In net, Gravel rebounded from a shaky 2017-18 campaign to set new personal bests in every major statistical category.

In the postseason, the Mooseheads’ run ended almost before it began. Down two games to none against Patrick Roy’s Quebec Remparts, the squad ventured to Quebec City and took two of the next three contests. Home victories in Games 6 and 7 spawned a six-game winning streak as the club would go on to sweep their division rivals from Moncton in the next round. Against the high-octane Drummondville Voltigeurs, Halifax, led by Gravel, held the regular season’s top offensive club to just four goals in three of their four victories during the series. While Gravel and Lavoie – who would lead the league in goals during the playoffs with 20 – shone throughout the postseason, Eric Veilleux’s Mooseheads finally fell in the President Cup Final to an outstanding Rouyn-Noranda Huskies squad.

With this year’s Memorial Cup tournament, the Mooseheads will become the first Maritime-based team to host the prestigious event twice. The first occurrence was in 2000, when the club fell in the Semi-Final to the OHL’s Barrie Colts. The club’s second trip to the tournament in 2013 was a different story. Led by Nathan MacKinnon and Jonathan Drouin, the Mooseheads converted a plethora of regular season success (58 wins, 120 points) into a President Cup Championship and, finally, a Memorial Cup title over the WHL’s Portland Winterhawks in Saskatoon, Saskatchewan.

Seemingly every story that was written about the Rouyn-Noranda Huskies over the course of the past few months has contained the same word – “historic”.

Indeed, it was a campaign for the ages in the Abitibi region of Quebec. The club lost back-to-back games just once over the course of the regular season and playoffs and went on a five-month stretch without a loss at home. However, it was a pair of accomplishments in the latter half of the regular campaign that truly turned heads throughout the CHL. The club would not suffer its first defeat of the 2019 calendar year until March 8th. That loss would snap a 25-game win streak, tied for the longest in QMJHL and CHL history. That phenomenal run of success would play an instrumental role in the setting of another league benchmark by the Huskies – their 59 wins would surpass the previous high-water mark of 58, originally set 46 seasons ago.

Led by the league’s top scorer in Abbandonato, captain Harvey-Pinard (40G, 85Pts) and draft-eligible winger Alex Beaucage (39G, 79Pts), the club’s offense was formidable during the regular season, featuring eight 20-goal scorers. However, as dynamic as Mario Pouliot’s charges were up front, it would be the defense that would set new league records. Led by sophomore Justin Bergeron, trade deadline acquisition and New York Islanders 2018 first-rounder Noah Dobson, and the rock solid netminding of Samuel Harvey, the Huskies surrendered an all-time low 138 goals. The organization would go out during the holiday trade period and bolster its already potent lineup with the acquisition of Dobson from the Acadie-Bathurst Titan as well as forwards Joel Teasdale and Louis-Filip Cote from Blainville-Boisbriand and Quebec, respectively.

In a strange turn of events, the Huskies would actually drop two of their first four outings against the Shawinigan Cataractes, a team than finished 86 points behind Rouyn-Noranda in the regular season standings, in round one of the playoffs. Starting with the fifth game of that series, the Huskies would commence another dominating run, going 14-2 the rest of the way, including back-to-back series sweeps over the Victoriaville Tigres and Rimouski Oceanic. After splitting the first two games of the championship series against the Mooseheads, the club pulled ahead thanks in part to contributions from league playoff scoring leader Teasdale, Harvey-Pinard and eventual playoff MVP Dobson, putting the finishing touches on their second league title in four years with a 4-0 victory in Halifax last Saturday, with Harvey pitching his fourth shutout of the postseason in the process.

The Huskies will be looking to avenge their only other appearance in the Memorial Cup. That took place in 2016, when the club, featuring winger Timo Meier and defenseman Philippe Myers, made it all the way to the tournament final in Red Deer, Alberta, only to fall in overtime to the London Knights.

No entry into this year’s – or, perhaps, any other – Memorial Cup tournament can lay claim to the tale of survival written by the Guelph Storm during the 2019 OHL postseason. With skill, determination and the uncanny ability to both survive and thrive when their backs have been against the wall, the fifth edition of the Storm to reach the national championship could very well be the most inspiring.

It was, when one looks strictly at the statistics, somewhat of a pedestrian regular season for the Storm. Seven other teams finished ahead of them in the OHL standings. However, the squad hung tough, thanks largely to an intrepid offense led by six 20-goal players including Arizona Coyotes draftee Schnarr, 50-goal scorer and 2017 Philadelphia Flyers selection Ratcliffe and a pair of mid-season acquisitions in Montreal Canadiens prospect Nick Suzuki, brought in from Owen Sound, and Chicago Blackhawks prospect MacKenzie Entwistle, acquired from Hamilton. Both acquired players represented Team Canada at the 2019 IIHF World Junior Hockey Championship. On the backend, standouts included third-year veteran Owen Lalonde, 2017 Edmonton Oilers third-rounder Dmitri Samorukov and Los Angeles Kings prospect Sean Durzi, another acquisition from Owen Sound.

In the postseason, the Storm composed a narrative that was nothing short of awe-inspiring. Under the leadership of veteran Head Coach George Burnett, the club rallied from a 3-0 series deficit in the Quarter-Finals to down the London Knights in seven games. The Semi-Finals afforded a similar challenge as the Saginaw Spirit took a 3-1 lead in that series. Three straight wins later and the Storm found themselves matched up against an Ottawa 67’s team that entered the championship round with a perfect 12-0 record in the postseason. The 67’s would extend that record to 14-0 before Guelph fought back, earning four straight victories and their fourth league title. Driving the bus during this inspired run was Suzuki, who was an easy choice for OHL Playoff MVP honors with 42 points in 24 games. Ratcliffe, Samorukov and winger Alexy Toropchenko joined Suzuki in reaching double digits in playoff goals, while netminder Anthony Popovich recoded a pair of shutouts during the run.

After spending much of the spring battling the present, it’s now up to the Storm to battle the past. The franchise has, by far, the most Memorial Cup experience among the franchises gearing up for this year’s tournament. They are also in search of their first national title. Their most recent appearance dates back to 2014, when a powerhouse Guelph club, which included, among others, Robby Fabbri, Brock McGinn and Jason Dickinson fell in the Final to the Edmonton Oil Kings at that year’s event in London, Ontario.

For the Prince Albert Raiders, making their way to the Memorial Cup was, to put it mildly, a long time coming. To put things in perspective, the last time this franchise battled it out for Canadian junior hockey’s top honors, the second-oldest franchise in this year’s tournament, the Guelph Storm, were six years away from playing their first game.

If the Rouyn-Noranda Huskies were the headliners of the junior hockey world in the second half of the season, the Raiders surely laid claim to those honors in the first half. From opening night on September 21st until New Year’s Eve, the club went a staggering 32-4. Proving their opening act was no fluke, Marc Habscheid’s charges then went 22-6-2-2 over the remainder of the regular campaign to capture first overall in the WHL standings by 11 points. Six players notched 20 goals, including prospective 2019 NHL first-rounder Leason, 43-goal man and San Jose draftee Noah Gregor and Ottawa Senators prospect Parker Kelly. A trio of blueliners – Pachal, Sergei Sapego and Max Martin – all eclipsed 40 points while 2017 Toronto Maple Leafs fourth-rounder, goaltender Ian Scott, finished among the league leaders in wins, GAA, save percentage and shutouts.

The first three rounds of the postseason would see the Raiders continue their impressive run of success.   In the Final, they would face not only the second-place Vancouver Giants, but their most formidable challenge of the postseason by far. The two teams would trade victories until the Giants forced Game 7. Then, they forced overtime in that Game 7. It would take a goal from overage forward Dante Hannoun, his league leading 14th of the playoffs, with under two minutes to go in the fourth period to deliver the Raiders their first WHL title in 34 years. Along with Hannoun, the Raiders were led by Leason, Gregor and rookie Belarussian center Aliaksei Protas. Scott picked up right where he left off in the regular season, leading the circuit in GAA (1.96), save percentage (.925%) and shutouts (5) in the playoffs.

Before punching their ticket to this year’s tournament on Monday night, the only other appearance by the Raiders at the Memorial Cup was a memorable one. After earning 58 victories during the regular season, the club, featuring future NHLers Dave Manson and Pat Elynuik, dominated the playoffs before taking down the Shawinigan Cataractes in the 1985 championship final, held in Drummondville, Quebec.

For more information on the 2019 Memorial Cup presented by Kia, visit: chlmemorialcup.ca.