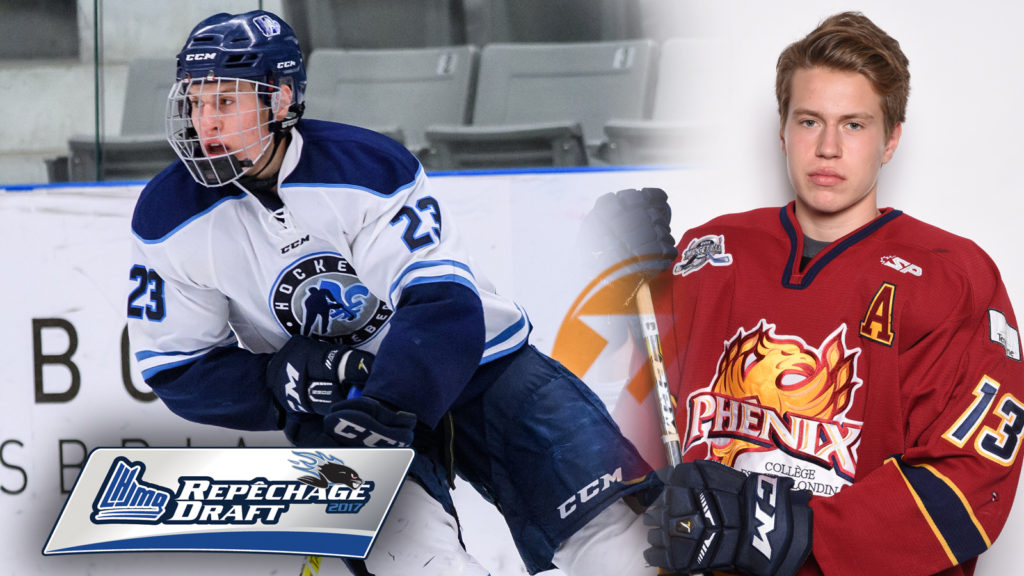 The apple never falls far from the tree. It was in 1989 that Patrick Poulin first laced-up as a member of the St-Hyacinthe Lasers. Two years later, he was one of the league’s leaders, with a tally of 138 points in 56 games. More than 25 years have passed and now it’s his son Samuel who finds himself in the spotlight.

‘I was only two years old when my father retired from the NHL. I have no real memory of his career; but it’s still an asset for me. He helps me a lot, he is always there to advise me when I need it. Still, he doesn’t put pressure on me. That’s important to him; for me to make my own path. My objective is the same as for him in his day; I want to play pro,’ says the top Esther-Blondin College scorer for the 2016-2017 season.

The 6′ 1”, 198-pound colossus is considered the second-best hopeful for the QMJHL draft that will be held Saturday, at the Harbor Station of Saint John. The director of the QMJHL recruiting support center, Carl Bouchard, describes him as a power forward who still has a touch of finesse.

‘He’s hard working, sturdy, and he protects the puck well. He’s got a powerful shot and he has improved his skating. With his above-average playing sense, his size and his work ethic, I have no doubt he will have a great career,’ he says.

The Esther-Blondin College Phoenix did not have an excellent playoff series and their regular season was punctuated by highs and lows.

‘We had series of defeats … But I’m not the type of player who is easily discouraged. I keep working, even when we’re trailing,’ says the player who mentions the names of Jimmy Benn and Leon Draisaitl when asked to list professional players who play his style of game.

‘They’re big guys who know what to do with the puck. I think I can bring a lot of offense. I have good game vision, I support my teammates well and I think that finishing my hits brings a lot of energy to the ice,’ he explains.

Because hockey is getting faster and faster, he intends to take power skating clinics over the summer. He believes that these techniques will allow him to become an even more complete player.

He’s a young man who trains very hard off the ice, he knows what he’s doing and never does anything by halves. I’m confident that he’ll play junior next year. He’s a good puck protector and I was lucky to have coached him. He was reliable in our end and it never made me nervous to send him out at the end of a game when we had a slim lead.’

Last year, Poulin scored 30 goals and added 38 assists for a total of 68 points in just 39 games.

A Family of Power Forwards

His father played 10 years in the NHL with the Whalers, Blackhawks, Lightning and the Canadiens. His 20-year-old brother Nicolas hasn’t been drafted yet, but hopes to attract the attention of professional or academic scouts if he is chosen to compete for a very last season in the Sherbrooke Phoenix uniform.

Even if he says that he wouldn’t be disappointed to be taken my any team, Poulin does not hide being taken by this team would particularly please him.

‘For my adaptation from one level to another, it would be easier to have my brother by my side. I don’t see any drawback to being drafted elsewhere, but Sherbrooke is a very central market and the team takes care of its players. I have faith in my luck …’ he smiled.

It may be in the cards, as the Phoenix currently have the draft’s second pick.