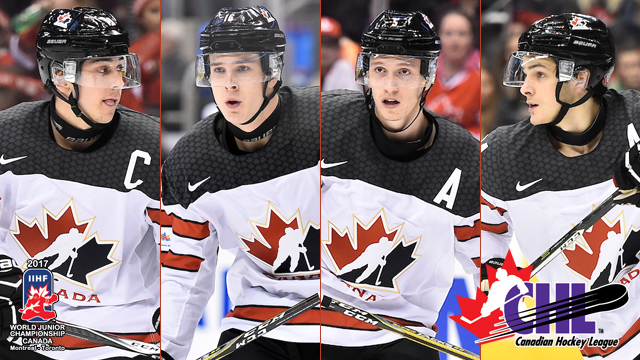 With the preliminary round of the 2017 IIHF World Junior Championship in the books, a number of Canadian Hockey League products have made their mark in the annual clash of nations.

A number of CHL players sit atop the tournament scoring leaders including the Canadian trio of Erie Otters teammates Dylan Strome and Taylor Raddysh along with Seattle Thunderbirds standout Mathew Barzal.

Strome sits second in tournament scoring with two goals, six assists and eight points through four games. Barzal is right behind him with seven points (3-4–7) and Raddysh, who is tied for the tournament lead in goals with five, has six points (5-1–6) over four contests.

Canadian blueliner Thomas Chabot (Saint John Sea Dogs) is second among rearguards in offensive production, registering two goals, three assists and five points over four games. Chabot is the only player at the World Juniors to have twice been named Player of the Game for his club, doing so in Canada’s win over Slovakia on December 27th and again in their New Years Eve loss to the United States.

Looking elsewhere in the tournament, former CHL Rookie of the Year Alexander Nylander of Team Sweden currently leads the event in scoring with nine points (4-5–9) through four matchups. Nylander, who played with the Mississauga Steelheads last season, was a first round (8th overall) pick by the Buffalo Sabres this past summer and has spent the 2016-17 season playing with the AHL’s Rochester Americans.

While Nylander’s Swedes are 4-0, the only other club with a perfect record has received some great goaltending from London Knights netminder Tyler Parsons. The Calgary Flames prospect has posted a 1.50 goals-against-average and a .923 save percentage over his two starts, both victories.

In other Quarterfinal action, a Swiss team led by 2017 NHL Draft prospect Nico Hischier (Halifax Mooseheads) squares off with the United States in Toronto at 5:30pm ET. Hischier leads Switzerland in scoring with five points (2-3–5) over four games. He’s followed by captain Calvin Thurkauf (Kelowna Rockets) with three points (2-1–3) in as many games.

Denmark will face Russia at 1:00pm ET at the Air Canada Centre. A Cinderella story in the tournament, Denmark has knocked off favourites in Finland and the Czech Republic thanks in large part to contributions from leading scorer Joachim Blichfeld (Portland Winterhawks, 3-1–4) and captain Alexander True (Seattle Thunderbirds, 1-2–3).

In the relegation round, Latvia is fighting for their World Junior future in a series against Finland that begins today in Montreal. The Latvians have yet to win, but some of the offence they have produced has come from the likes of Toronto Maple Leafs prospect Martins Dzierkals (Rouyn-Noranda Huskies, 1-2–3) and other forwards in Rudolfs Balcers (Kamloops Blazers, 1-1–2) and Renars Krastenbergs (Oshawa Generals, 2-0–2).

CHL players have also accounted for 40% of top performers to receive Player of the Game honours thus far at the World Juniors. Here’s a look at those recipients: 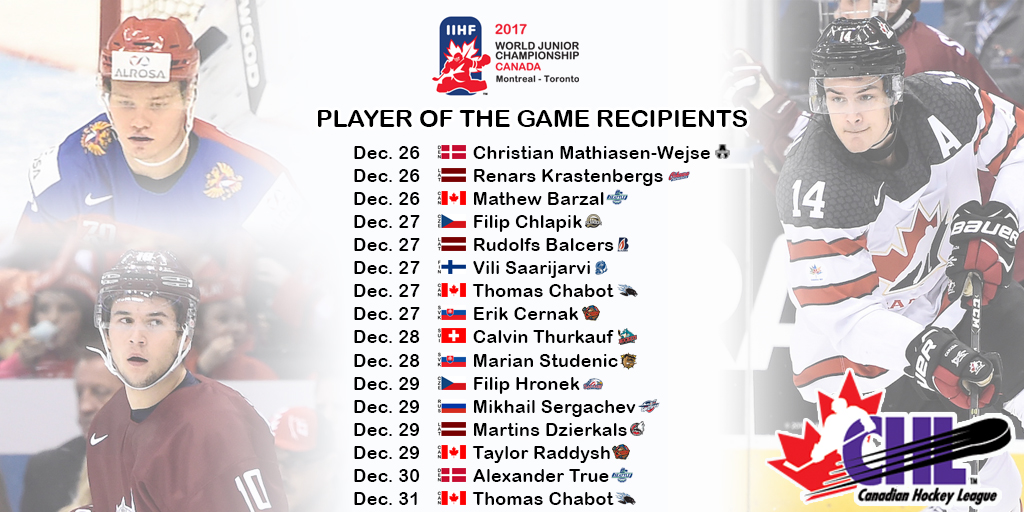