Playing for Today, the “Huskies Way” 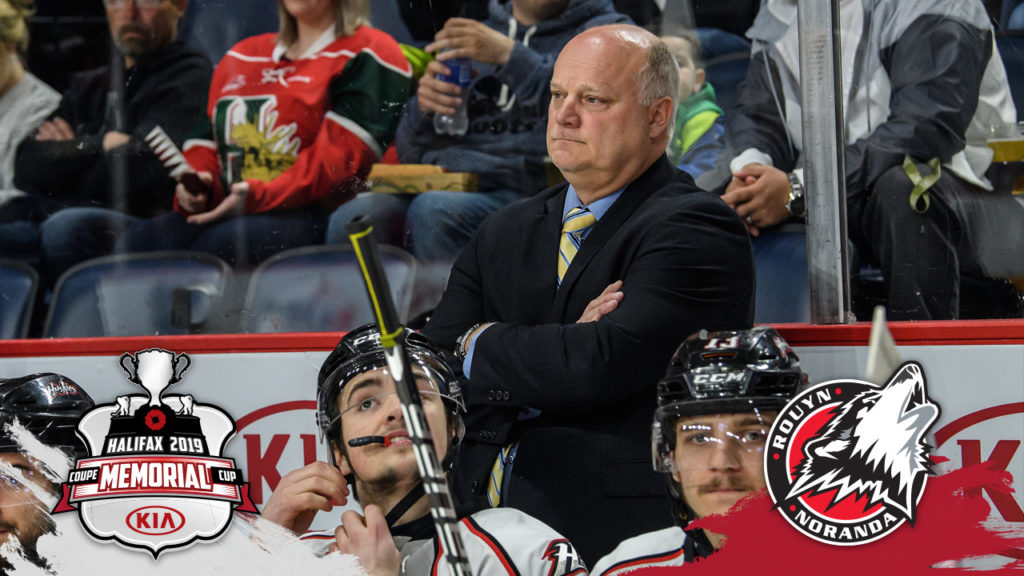 Before hitting the record button beneath the stands on a (rare) sunny Sunday afternoon in Halifax, this is the edict issued by the winningest Head Coach in the CHL during the 2018-19 season. But when you’ve earned the accolades Rouyn-Noranda Huskies bench boss and General Manager Mario Pouliot has over the course of the past two seasons, it’s hard not to mention yourself at least a little bit.

To that end, let’s recap the past 20 months in the life of the 55-year old St-Hyacinthe, Quebec native. 102 regular season victories, including a CHL record-tying 25 straight earlier this year with the Huskies. 59 wins in 2018-19, setting a new benchmark in the QMJHL in that regard. Back-to-back President Cup titles, first with the Acadie-Bathurst Titan, then with the Huskies in this very city less than two weeks ago. A Memorial Cup Championship in the 100th anniversary of the event in Regina, Saskatchewan. Coach of the Year in the “Q”. GM of the Year in his first season in that role. And that’s not to mention countless other games and moments that have been pieces to the puzzle that completes one of the greatest tenures of team leadership in league history.

How does one maintain perspective with such a steady stream of achievements in a rather condensed period of time? Talk to Mario Pouliot for five minutes and you’ll realize that for him, perspective is second nature.

“Honestly, I just feel so fortunate to have had the chance to coach two really good groups of kids that made a ton of sacrifices for the team logo,” Pouliot explains. “It’s been a huge effort from everyone from the bottom to the top. Seasons are really long. It’s always a big reward to keep playing in mid-May and to battle for the Memorial Cup. We don’t know when it could happen again so we have to enjoy it. I’m really happy with what we built in Bathurst and here in Rouyn-Noranda.”

A whirlwind off-season sent Pouliot from the franchise he built into a national champion in Bathurst to a familiar stomping ground. The strings that tie him to the Huskies organization are numerous. This is Pouliot’s third stint with the Huskies following tenures as an Assistant Coach from 2009-11 and 2013-14. His son, Raphael, spent two seasons as a scout with the organization before recently moving on to the same role with the Vegas Golden Knights.

Even though it was a quick turnaround for Pouliot, the spot where he landed could not have been better or more familiar.

“My son drafted three-quarters of the Huskies team with the scouting team, so I had a pretty good idea about the type of players that I’d have a chance to coach and the kind of people I’d be coaching,” he recalled. “It was easier for me when I arrived (to take on the GM role as well as coach). I was here 3-1/2 years ago. I knew at that time what the Huskies (meant) to the city and I knew about the “Huskies Way”. I just took the time at the start to analyse the players behaviours, looked at our strengths and where we had to get better, as well as the way we wanted to play.”

To win 75 games in the regular season and playoffs combined, anyone at the helm would need to have a firm grasp of their team vision virtually from day one. Indeed, Pouliot possessed just that outlook.

“The biggest adjustment I brought was the way to play offensively with the puck,” he explains. “Playing fast, attacking other teams with speed, creating time possession from our forecheck while also playing a tight defensive game. From there, I knew I needed players with a high compete level, thinking and playing fast.”

What often gets lost in the multitude of superlatives heaped upon this year’s version of the Huskies is the fact that they went into the season with Pouliot as their rookie General Manager. Additionally, they bucked the trend many other teams over the course of the history of the league – his squad in Acadie-Bathurst included – have set. They didn’t go for quantity when they approached the trade period in December and early January. They had very specific goals. The team that lost but eight times in the regular season acquired exactly three players.

“It was clear to us we needed a stud defenseman on the back end,” Pouliot said. “(We acquired) Noah Dobson (from Acadie-Bathurst) and he’s done an amazing job with us on and off the ice, leadership-wise. We were looking to also add depth up front and (former Quebec Remparts) Louis-Filip Cote who (the Huskies) drafted at 16, is a pure “Huskies” guy. Terrific person, great work ethic, multi-dimensional. (Joel) Teasdale (acquired from Blainville-Boisbriand) is very tough to play against. Our plan at the start was not to make a lot of trades. What was more important for us was the quality of the people and players that we wanted to acquire at that time. That was our plan and it turned out pretty well.”

Go back and read the last few paragraphs. Quality of people he wanted to acquire. Not just quality of play. Knowing the “Huskies Way”. These aren’t just clichés. This is a vision.

So, what is the “Huskies Way” as envisioned by the leader of this pack?

“Having a high compete level,” Pouliot begins. “Every shift counts. You have to be hungry. Play fast, play with speed and never give up. If you have the compete level, you have character. A ton of grit, speed, never giving up.”

But still, we’re talking about a man who has coached and now built two teams and, in the span of two seasons, sent both of them to junior hockey’s pinnacle event. Yes, he’s had the right players. And it is true that he has relied on spectacular support staffs. However, when one steps back and looks at the two most successful teams in the QMJHL since the fall of 2017, Mario Pouliot is the one non-playing common denominator. It’s a hard fact to ignore. It’s also hard to ignore what this magnitude of success could mean to Pouliot down the road. Will we see him in a higher league? Does the NHL beckon? It’s understandable to want to look ahead at what could be in store for future seasons.

Unless, of course, you’re the guy everyone is talking about. After all, the “Huskies Way” applies to him as well.

“I always say to our players that we have to live in the moment and stay in the present,” Pouliot counters. “For me, all my focus is to be well prepared for tomorrow. As for the rest, it doesn’t matter. I just want to enjoy every day and get better day after day. I just pay attention to the things I can control.”

The bottom line is simple; wherever Mario Pouliot’s successes take him, the recipients will be lucky to have him.

Now that’s something worth talking about.