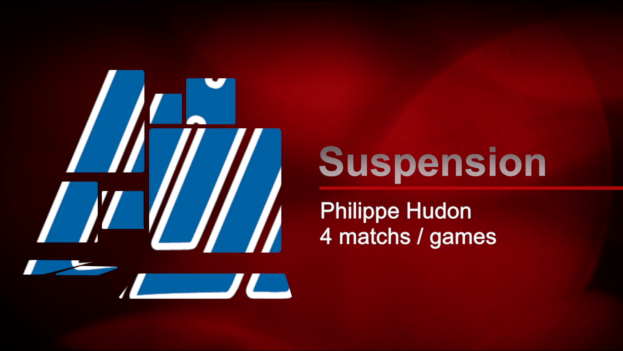 The Director of player safety of the Quebec Major Junior Hockey League, Raymond Bolduc today suspended Philippe Hudon of the Victoriaville Tigres for 4 games. The suspension was handed out following an incident that occurred on October 25, against the Drummondville Voltigeurs.

Here is the rational that led to the decision:

The Drummondville defenseman directed the puck along the boards to exit the zone.

The opponent at the face off level, along the boards, turned towards them and directed the puck to the neutral zone.

The player at fault:
– Being in front of the opposing net, he took 3 to 4 stides, accelerated and glided a little before hitting his opponent.

– He propelled himself upwards and his two skates were at least a foot above the ice on impact.

His opponent was in a vulnerable position, hunched forward and facing the boards.

Even though the player at fault hit his opponent on an angle, he made no effort to minimize the impact. On the contrary, he finished his check with three quarters of his force on his opponent’s back and also hit him on the head.

The opponent only suffered a minor injury on the play.

This was not the first offense for the player at fault.

The act was violent and dangerous.