Our Alumni | Verreault-Paul returns to Chicoutimi to make a difference 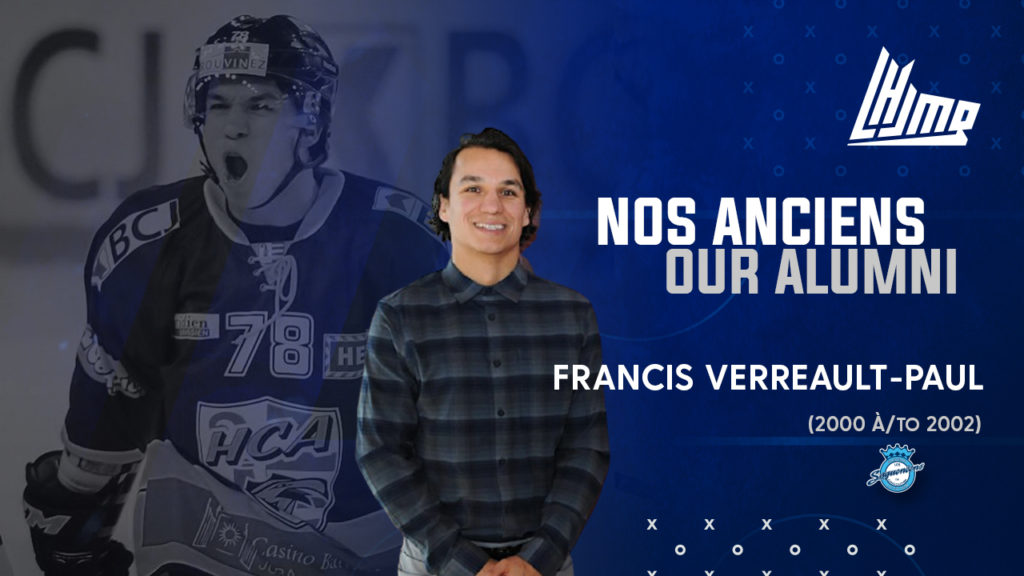 Francis Verreault-Paul lived every hockey player’s dream: he earned a living playing the game he loved while traveling around the world.

Today, he’s happy to be back home.

The 34-year-old forward played the last of his five QMJHL seasons with the Chicoutimi Saguenéens back in 2007. He went on to spend the next four seasons at McGill University, graduating with a science degree as well as leading the Redmen to a national title back in 2012.

That same year, he’d finish the season by playing six games with the American Hockey League’s Hershey Bears. He’d kick off the next campaign in the East Coast Hockey League with the Greenville Road Warriors before being traded to the Bakersfield Condors, and then to the Orlando Solar Bears the ensuing year, in 2014.

At the conclusion of that season, the Roberval, Quebec native would head over to Norway, where he’d play the final seven games on the Tønsberg Vikings’ calendar. It’s that first taste of European hockey that would eventually open doors for the young man.

“I had never traveled [outside of our continent] before then”, admits Verreault-Paul. “It was an incredible experience, because I had absolutely no idea about what to expect in Europe. I must say I loved every minute of it!”

The forward would come back to suit up for the Bakersfield Condors in 2014-15, but he would up and leave after only 14 games to go settle down in Switzerland.

“My goal was to go back to Europe as soon as possible and I found something in Switzerland, in Ajoie, a second division team”, he remembers. “I was really happy to play there because of the lifestyle, but also because of the passion the fans have towards hockey. The money was also very good!”

It’s no secret, Verreault-Paul made the most of his time in Switzerland.

“It’s not easy to find a spot there because there’s room for only two import players per team”, he admitted. “Usually, they turn to former NHLers or AHL players to fill those spots.”

But Verreault-Paul’s performances spoke for themselves. With his 11 goals and 25 points in 19 games, he garnered enough attention to be loaned to the Fribourg-Gotteron franchise, in the Swiss top division, to end the campaign.

“It was one of my best experiences in hockey. For me, it was a little unreal to skate in such a great league”, remembers the forward.

Then, between 2015 and 2017, Verreault-Paul would add to his resume by playing in the top divisions across Denmark, Italy and England.

As a matter of fact, during his time spent in England, the QMJHL alumnus even managed to earn his M.B.A. by taking classes at Buckingham University!

“As the years passed, I started finding it more and more difficult to leave [Quebec] because I was ready to start planning my second career”, he explains.

As a 30-year-old with his bachelor’s degree and M.B.A. in his back pocket, the one who had once served as the Sags’ alternate captain began thinking about retiring from hockey for the first time of his life.

At that moment, he got a call from his old buddy Guillaume Doucet. The Rouyn-Noranda Huskies and P.E.I. Rocket alumnus asked him to come to Milan, in Italy, for one final run. Verreault-Paul accepted without really hesitating.

Despite a tremendous season in which he racked up 27 points in 19 games, he would head home for good just a few months later.

“I had a job opportunity where I was born and raised, in Lac Saint-Jean, in the native community of Mashteuiatsh”, states Verreault-Paul. “I was ready for that. I wanted to face some new challenges and I also wanted a little more stability in my life.”

That’s when the forward officially put an end to his hockey career in order to become both a development and political consultant for the Mashteuiatsh band council.

He would keep that job for a year before turning to a position that he cherished just as much. Since January of 2020, he serves as the Director of relations with the First Nations over at the Université du Québec à Chicoutimi, a job that has him working with close to 400 native students on a daily basis.

Francis Verreault-Paul is the first one to admit that his stint in the QMJHL prepared him well for his new career.

“I was fortunate to play with guys like me, for whom school was very important”, he mentions. “Discipline in hockey also leads to discipline in real life. You need to find the right balance to consolidate school and hockey, all while working to reach your goals.”

“The Q really helped me prepare for this new life of mine. I learned a lot during my junior years and I’m very grateful for that. It was always about much more than hockey.”