Our Alumni | An outstanding student, Nicolas Therrien is now reaping the fruits of his labor 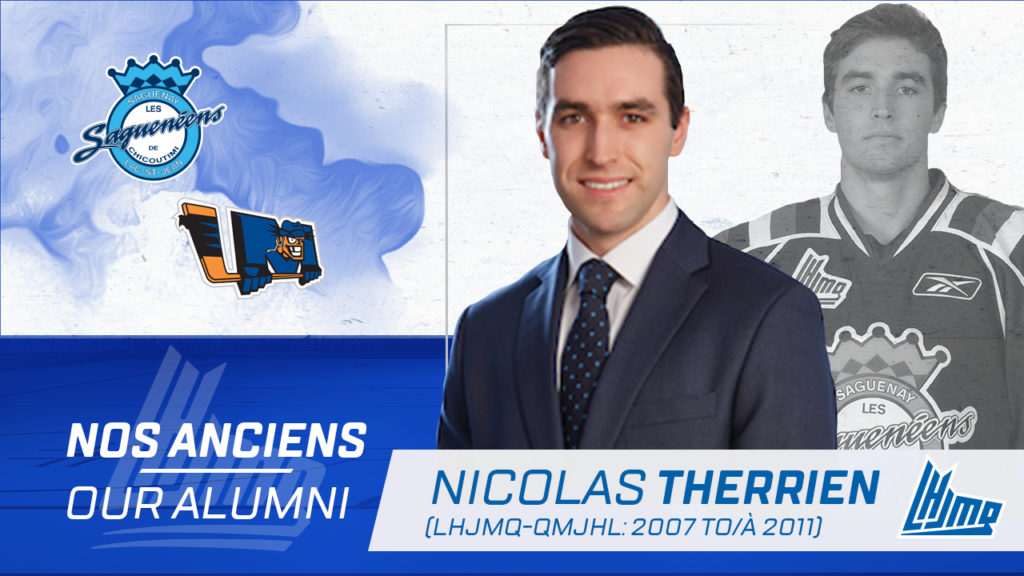 Nicolas Therrien has every reason to be proud of his career path. Lewiston’s fifth round draft pick eventually became captain of the Saguenéens, won a national championship with McGill University and then made it in the financial world.

The Châteauguay, Que. native is the first to admit that he dreamt of playing in the NHL as a youngster, but he always considered his studies as a solid plan B to have in his back pocket.

As a matter of fact, that is what convinced him to make the jump to the QMJHL, more than a decade ago.

“When I was playing midget as a 15-year-old, I had to make a decision on my future. I had good grades in school, so I had the option of taking a scholarship and heading the American College route, or staying put and playing major junior hockey”, remembers Therrien. “I factored the good and the bad from both options and I decided to play in the QMJHL.”

While the temptation of leaving the family home to settle down in the South was appealing, Therrien quickly realized that, in his case, the long-term advantages just weren’t there.

“There’s no doubt that when you look at American Colleges, they’re good schools with awesome campuses. But we also have some excellent schools here in Quebec”, he states. “It all depends on the field you wish to work in one day.”

“For me, I knew it would be in business or finance – where a network of contacts is pretty important”, adds the defenceman. “That’s why I didn’t see myself going to school in the U.S. to come back here afterwards and not have any contacts. I preferred doing my studies here, do some internships, and meet people in my field that are from the area.”

Therrien took his first strides in the Q by wearing the colors of the now-defunct Lewiston MAINEiacs franchise. Unpleased with the way they were handling long-distance education, he packed his bags and went back home after playing in just 20 games of his rookie season.

The next year, his uncle Gaston Therrien, a member of the QMJHL Hall of Fame, made a phone call to Chicoutimi’s Head Coach and GM at the time, Richard Martel, asking if he could invite Nicolas to the Saguenéens training camp.

A tireless worker, Nicolas earned his spot on the Sags roster and coincidentally met Martel – a person who would have a immediate impact on his life as both an athlete and a student.

“While people usually remember Richard for his intensity, he still had two bachelor’s degrees. I remember he felt like our studies were really important”, mentions Therrien. “Sometimes we’d come back in the middle of the night from a trip in the Maritimes and he’d tell us to go to class in the morning, and to go to bed after.”

Therrien, who loved the attention to detail his coach was showing towards school, immediately felt at ease within the franchise. His leadership started to show at school and at the rink, enough so that during his final QMJHL season in 2010-2011, he was named captain of the Sags. A few months later, he got his hands on the Marcel-Robert Trophy, awarded to the QMJHL Student-Athlete of the Year.

The very next year, he used the QMJHL’s scholarship program to begin his Bachelor of Commerce, concentration in Finance, at McGill University. There, he would join the school’s men’s hockey team and realize an unimaginable feat.

“I had the chance, in my very first year, to win a Canadian national championship. McGill has one of the first hockey programs in North America and they had never won that championship before, so it was a pretty big accomplishment! I thought I was very lucky to have had the chance to take part in that run”, he remembers.

Wanting to push his studies even further, the young man then set off for Ottawa University before coming back finish his master’s degree at Montreal’s HEC. Today, he plays an important role over at Formula Growth Limited, an independent firm that specializes in investment counseling.

“I was named an associate this year. Because I work in a smaller firm, it really allows me to see a little bit of everything”, he mentions. “In a day’s work, I can meet with clients, do a little bit of operations or a little bit of investing. That’s what I enjoy most about my job; when you’re getting started in this business, you’re like a sponge looking to soak up as much information as possible instead of specializing right away.”

While Nicolas Therrien may never have gone the distance with the Saguenéens during the postseason, he still has tremendous memories from his time in the Q and from the people he met along the way. But it’s mostly was he learned and acquired in the league that he’s extremely grateful for today.

“It’s true that the QMJHL is a school of life in a way, but it’s much more than that for me. That’s where I learned to never quit”, he states. “I was pretty unfortunate and sustained quite a few injuries, so I had to learn to keep working hard. And when you have setbacks, you need to push through. You put your head down and you keep charging. And even though sometimes you can’t see the light at the end of the tunnel, it’s by working hard that you give yourself the best chances.”

Therrien states that other elements he learned during his time in the QMJHL are also very beneficial to him today on the labour market. Teamwork is a prime example that comes to mind.

“We’ve played on a hockey team since we were kids. So sometimes you take for granted that on a team everyone is working towards a common goal, and that you need to work hard and to communicate to reach it. You also learn that on a team, you can’t be everyone’s best friend. But you need to respect others, work together and push in the same direction.”

“That’s something that struck me when I first set out in the business world”, he remarks. “We think that everyone’s like us, but it often isn’t the case. It doesn’t come naturally for everybody to have to work as a team, to do your part, to communicate and to take the blame when you’re responsible of something. Those are all elements that you learn in hockey and that are at the forefront in major junior, when teenagers turn into men. They are elements that employers tend to love seeing in a CV; to know that you played hockey and that you’re able to work in a team.”

“Back when I was playing, I was seen as someone who wanted to set the example, who worked hard and never took the easy route. When I got on the job market, mentioning that I had been my team’s captain was usually a good sign for employers that I wasn’t a quitter, and that I always gave it my all.”

While his childhood dream of reaching the NHL is now a thing of the past, Nicolas Therrien can definitely be extremely proud of all his other accomplishments. 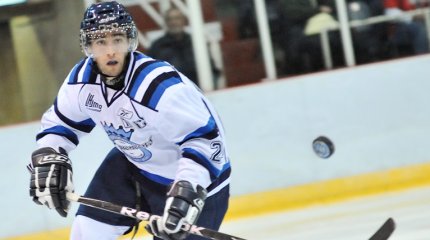