baie-comeau drakkar Our 18
by
Will MacLaren 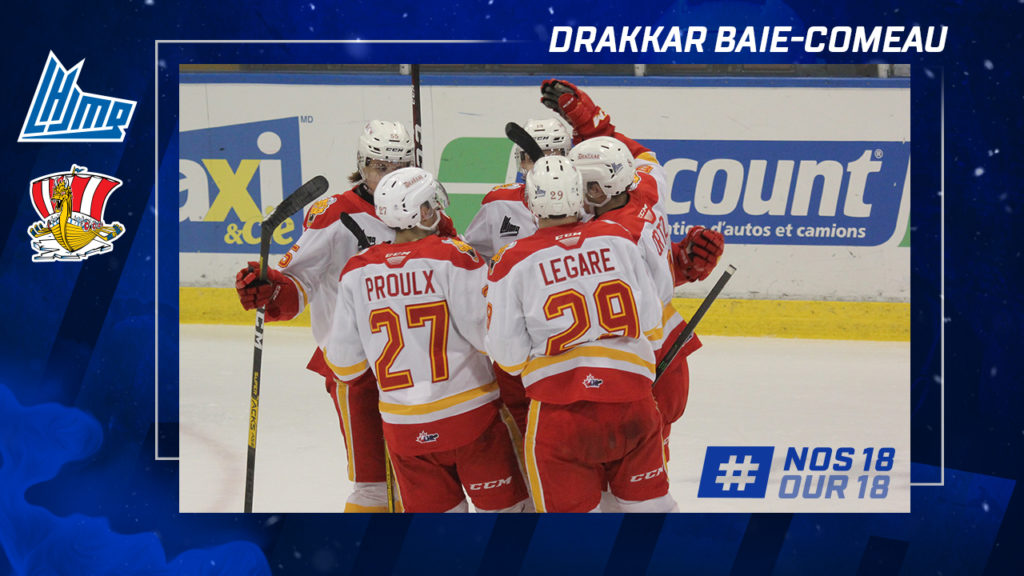 At this time last year, the Baie-Comeau Drakkar was experiencing a sizeable roster turnover coupled with the acquisition of a new Head Coach following a disappointing result in the opening round of the 2019 President Cup Playoffs.

Fast forward to today and some of that storyline remains the same. There is once again a new bench boss in town with Jean-Francois Gregoire going from associate coach to head coach just a couple of weeks ago. However, the players he will oversee are, for the most part, another year older and ready to embark on more pivotal roles with the club.

As has been the case over the past two years, much of the Drakkar’s success will funnel through winger and 2019 Pittsburgh Penguins draftee Nathan Légaré, fresh off back-to-back seasons of 45 and 35 goals, respectively. The captain will be reunited in the coming weeks with European wingers Raivis Kristians Ansons and Valentin Demchenko, who combined for 69 points during the most recent campaign. Center Xavier Fortin will return for his first full season in Drakkar colors after being acquired from the Charlottetown Islanders during last season’s holiday trade period.

On defense, Christopher Merisier-Ortiz will look to build off a campaign that saw him finish tied for sixth in scoring among QMJHL blueliners in 2019-20. He’ll likely carry the offensive load on the back end with accompaniment from a veteran defence-first skater in Jeremy Jacques and training camp acquisition Gabriel Belley-Pelletier, most recently of the Quebec Remparts. It is hoped that 2020 second-round selection Anthony Lavoie will challenge for a spot on a defense corps that will require an infusion of young talent sooner rather than later.

Between the pipes, overager Lucas Fitzpatrick returns for his fourth QMJHL season after setting new career bests in wins, goals against average and save percentage in 2019-20. Also attempting to crack the roster is 17-year-old Bulgarian-born Ventsislav Shingarov, who impressed during four appearances last season.

For a club that has not selected in the first round of the QMJHL Draft since 2017 or won a playoff series since 2015, stability will be crucial. With Gregoire making his Drakkar debut and Pierre Rioux entering his sophomore season as GM, it will be interesting to see how the tandem will take the group they have inherited and attempt to steer it in the proper direction.