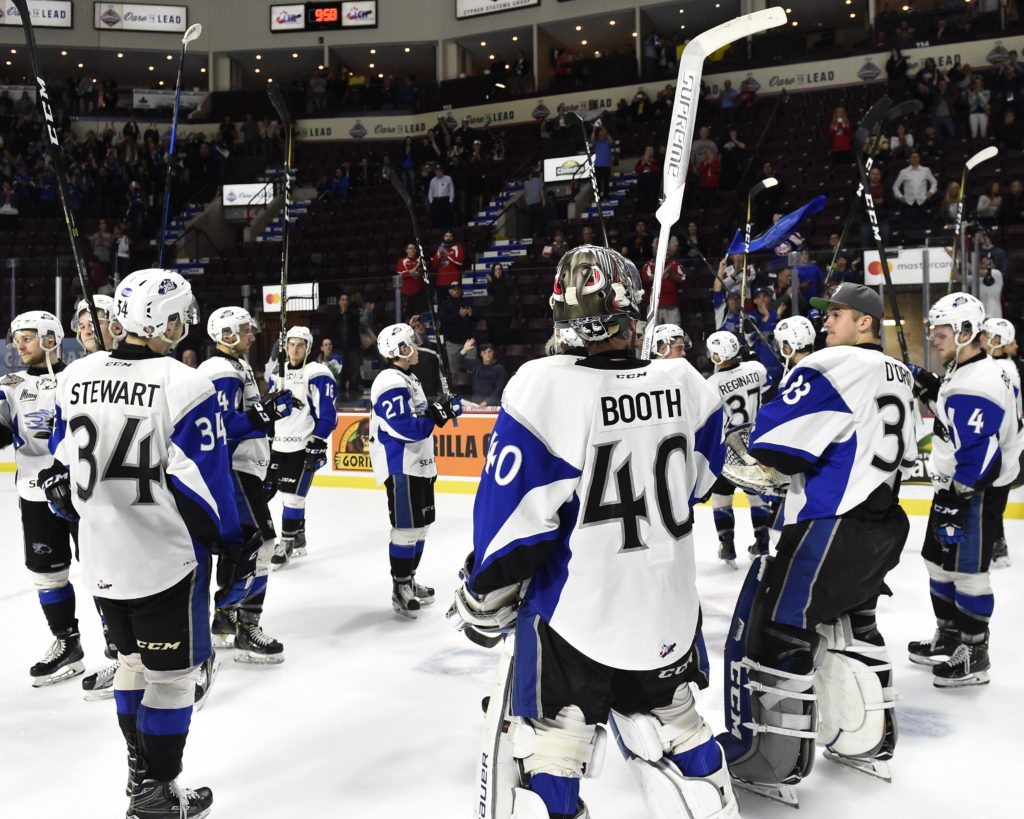 WINDSOR, ON –It will be an all-OHL affair in the 2017 Mastercard Memorial Cup final as the Erie Otters advanced to Sunday’s finale with a 6-3 win over the Saint John Sea Dogs on Friday night at the WFCU Centre in Windsor, ON.

The first showdown between these two teams on Monday was an explosive encounter that saw them combine for 17 goals in a 12-5 win by the Otters. Their semifinal battle proved to be a tighter checking affair with the Otters again ending up on top to reach the Mastercard Memorial Cup final for the first time in franchise’s 21-year history.

The Otters opened the scoring when defenceman Darren Raddysh dug the puck out from the back boards and made some nifty moves in tight before beating Callum Booth upstairs with a pretty goal. The assist went to Warren Foegele who dumped the puck into the Saint John zone which was tracked down by Raddysh.

The Sea Dogs bit right back when when Joe Veleno batted a rebound from a shot by Saint John captain Spencer Smallman out of the air to beat Troy Timpano to tie the game 1-1. Also picking up an assist on the play was Julien Gauthier.

The goal was Veleno’s third of the tournament as he continued to have the hot hand for the Sea Dogs following his 3-point night in Saint John’s 7-0 win over the Seattle Thunderbirds on Tuesday night. Veleno turned a number of heads at this tourney despite still being a year away from being eligible for the NHL Draft.
Then with the Sea Dogs’ Bokondji Imama serving two minutes for a hit from behind, the Otters’ lethal power play struck as it was now Darren’s brother Taylor Raddysh’s turn to score, as the Erie captain accepted a pass from Anthony Cirelli before firing puck past Booth to make it 2-1. Alex DeBrincat picked up the other assist on the scoring play for the Otters.

In a bizarre turn of events following a disallowed goal and a penalty awarded to Erie, the Sea Dogs tied the game on that ensuing power play as Julien Gauthier accepted a feed from Mathieu Joseph at the goal mouth before beating Timano to knot the game 2-2 with 42 seconds left in the period. Matthew Highmore picked up the other helper on the play.

Undaunted, the Otters again grabbed the lead at the 2:38 mark of the third as the ever-dangerous Dylan Strome swooped in before zipping a puck five-hole past Booth on a nice play set up by DeBrincat. The goal was Strome’s impressive sixth of the tournament.

Then German Poddubnyi scored his first of the tournament to give the Otters some breathing room with a goal assisted by Ivan Lodnia to make it 4-2. Taylor Raddysh followed that up by notching his second goal of the night and fifth of the tournament to make it 5-2, assisted by Cirelli and DeBrincat at 12:31 of the third.
Sea Dogs uncontested leader Thomas Chabot then fittingly scored what would prove to be the final goal of Saint John’s brilliant season with just under four minutes to play on a goal assisted by Gauthier and Chase Stewart. That would be as close as Danny Flynn’s squad would come as the Otters would add an empty-netter by Foegele to make it a 6-3 final.

The Otters outshot the Sea Dogs 37-23 as Booth made 31 saves for Saint John and Timpano made 20 stops for Erie. A lack of discipline hurt the Sea Dogs as the Otters went 2-for-7 with the man advantage versus Saint John going 1-for-2.

Of the now 33 times a QMJHL team has played in the semifinal at the Memorial Cup since 1974, the Q team has been eliminated 16 times, reached the final 14 times and has gone on to be crowned champion 3 times.

This year’s final will mark the fourth time since the Mastercard Memorial Cup moved to its current format in 1983 that two OHL teams have faced off in the grand finale. The last time came back in 1993 when the Sault St. Marie took on Peterborough. That year, the host Greyhounds, led by head coach Ted Nolan, Dan Cloutier and Steve Sullivan downed Chris Pronger, Corey Stillman and the Petes to win it all.

This is will be the first Mastercard Memorial Cup final for the Otters, while the Spitfires are making their fourth-ever appearance in the title game. Windsor was crowned champions in 2009 and 2010 and lost the final in 1988.

The Spitfires and Otters will now face off on Sunday at 7:00 p.m. and you can catch all the action on Sportsnet and TVA Sports.