#NorthernDuel: Battle at the top 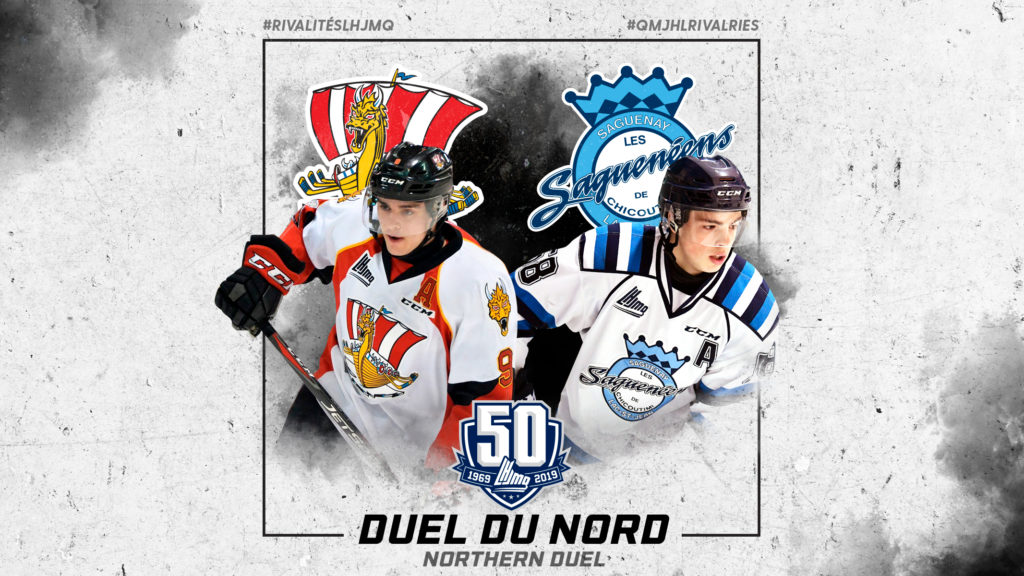 The next chapter of the Northern Duel between the Baie-Comeau Drakkar and the Chicoutimi Saguenéens will soon get underway.

“Generally speaking in junior hockey rivalries really intensify during the playoffs, but the Saguenéens are our direct rivals and this rivalry is quickly picking up steam. We noticed it even during the preseason”, explained Drakkar head coach Martin Bernard. “When you host a team five times at home, the intensity is always there – both on the ice and in the stands!”

“Playing ten games a year against the Drakkar, tense moments happen all the time. That being said, hockey has evolved and the rivalry begins once the puck is dropped and then ends when the siren sounds”, added Saguenéens GM and head coach Yanick Jean.

BATTLE AT THE TOP

As the two top teams in the East Divison, the Drakkar and Sags are both enjoying excellent starts.

Before their matchup with the Remparts in Quebec City on Wednesday, the Drakkar had won nine of its first 12 games so far in 2018-19, including a pair of wins over the Saguenéens on opening weekend.

“We are in the third year of our development plan. This should be the year things fall into place”, said Bernard.

As for the Sags, they have a 7-3-1-2 record to start the year and are currently breathing down the Drakkar’s neck.

“To play 10 games against the Drakkar and six others against Rimouski, we face adversity all the time and I think that helps a young team like ours to progress much more quickly”, explained Jean. “On top of that, we learned a lot from those two losses to Baie-Comeau to open the season.”

Jean’s assistant with the Saguenéens, Claude Bouchard, worked briefly behind the Drakkar’s bench in 2013-14. That season, Baie-Comeau lost in the President Cup Final and routinely played in front of a packed house.

“The Centre Henry-Léonard can sure have an intimidating crowd. Coming off their strong start to the season, I am sure the buzz is back in Baie-Comeau”, states Bouchard. “Same goes for us in Saguenay, where players like Hendrix Lapierre and Théo Rochette [Chicoutimi’s two first round picks this past June] have brought a breath of fresh air to the team. Our fans know that some exciting years are ahead.”

A part of the QMJHL since the days of tube skates (or almost!), Bouchard remembers the days when things could get out of control when neighbouring teams clashed.

“The rivalries are more civil than back in the day when I was coaching the Val-d’Or Foreurs. Our games against the Rouyn-Noranda Huskies would commonly see two or three fights break out. Different times and a different era”, concluded Bouchard.

Despite sharing a division for the past two decades and that the playoff format often saw geographical rivals square off in the opening round of the playoffs, the Drakkar and Sags only locked horns twice in the spring: two straight years in 2004-05 and 2005-06. Both were first round triumphs for Chicoutimi.

Looking ahead to this 2018-19 edition of Rivalry Weekend, the Drakkar will travel to Chicoutimi to take on the Sagueneens at the Centre Georges-Vézina on Friday night, before hosting the Sags on Saturday afternoon in Baie-Comeau’s Centre Henry-Léonard.