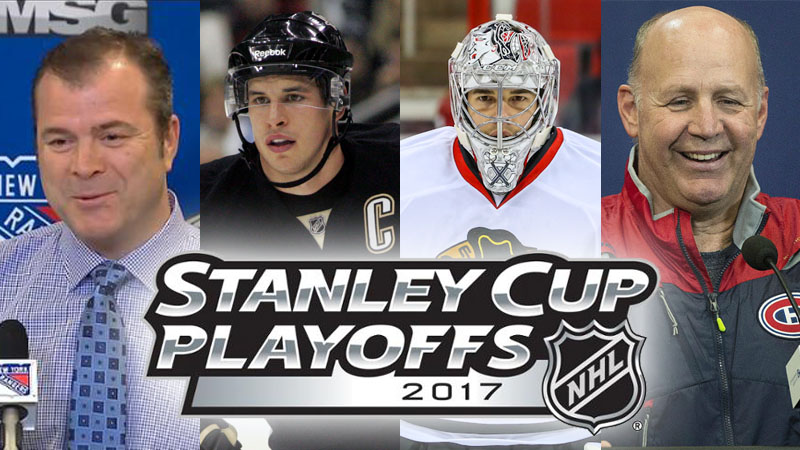 QMJHL fans will have all the more reason to closely follow the 2017 Stanley Cup playoffs as over three dozen former players and coaches are all set to begin their chase for the Cup. No less than 16 of the 18 teams in the QMJHL can count a former member of their club in this year’s playoffs, a group that already boasts 16 Stanley Cup rings.

Of the 16 teams in this year’s NHL playoffs, 14 of them include at least one QMJHL alum. Leading the way with six are the Ottawa Senators (Mike Hoffman, Derrick Brassard, Jean-Gabriel Pageau, Alexandre Burrows, Chris DiDomenico and head coach Guy Boucher) and right behind them are the Montreal Canadiens with five (Philippe Danault, Alexander Radulov, Paul Byron, Nathan Beaulieu and head coach Claude Julien).

A goalie and a head coach meanwhile share the honour for the most playoff appearances in this year’s group. The Penguins’ Marc-Andre Fleury (Cape Breton 2000-04) is making his 11th playoff appearance this spring as is Rangers head coach Alain Vigneault. Vigneault, of course, played for the Hull Olympiques and the Trois-Rivieres Draveurs (1977-81) and then coached these two teams as well as the Beauport Harfangs and PEI Rocket between 1986 and 2005.

At the other end of the spectrum are six former QMJHLers who are set to make their playoff debuts, a list that includes the Sens’ DiDomenico (St. John and Drummondville 2006-10), Danault (Victoriaville and Moncton 2009-13) and Byron (Gatineau 2006-09) of the Canadiens, the Blues’ Ivan Barbashev (Moncton 2012-15), the Blue Jackets’ Lucas Sedlak (Chicoutimi 2012-15) and the Sharks’ Timo Meier (Halifax and Rouyn-Noranda 2013-16).

As for QMJHL teams with the most players in this year’s NHL playoffs, that honour goes to the Moncton Wildcats with eight players (Danault, Barbashev, Dmitry Jaskin in St. Louis, Brad Marchand  in Boston, David Savard in Columbus, Corey Crawford and Johnny Oduya in Chicago and Pierre-Alexandre Parenteau in Nashville), while the Olympiques and Sea Dogs boast six apiece.

Here is the complete list of QMJHL alumni in the 2017 Stanley Cup playoffs: