#NBBattle : A rivalry alive and well 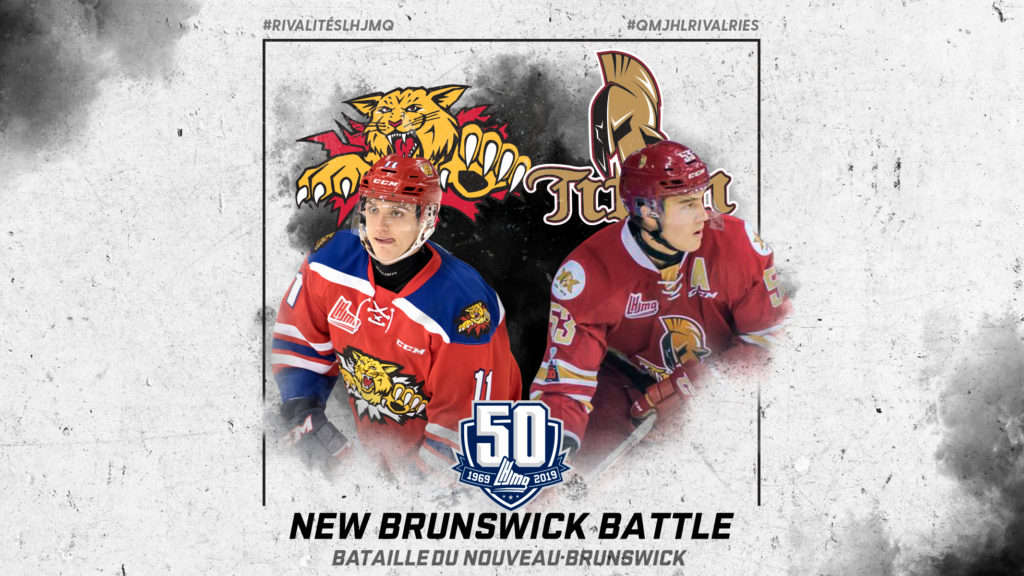 One could say the Moncton Wildcats played a major role in the Acadie-Bathurst Titan’s magical championship run of a year ago.  Three former Wildcat players and one Wildcat draft pick all played significant roles in the Titan claiming Quebec league top honours as well as the Memorial Cup.

Crossman has been derailed thus far due to off-season knee surgery and is expected to return next month, while the aforementioned veteran blueliner Adam Holwell has moved on to university hockey.

The rebuilding Titan are trying to find their way in the highly competitive Maritimes division, while The Moncton Wildcats have showed their true potential in the early part of the 2018-2019 season, going 8-3-2 over their first 13 games.

The Wildcats boast one of the most skilled and deepest forward groups in the league.   Jeremy McKenna, Jakob Pelletier, Adam Capannelli and Mika Cyr are leading the way offensively for the Cats, while veteran netminder Francis Leclerc and star rookie Charles-Antoine Lavallée have been rock solid between the pipes for the 5th place squad.

Twelve points may separate these two teams in the standings, but the Moncton Wildcats are definitely trending in the right direction in year three of their own unprecedented rebuild.

The Wildcats are looking for redemption after being dominated by the Titan a season ago; Acadie-Bathurst won eight out of nine contests against its New Brunswick rival last season.

The major pieces of the Titan championship team may be gone, but one big piece remains.  Recently appointed Titan captain Noah Dobson is still eager to lead the way. As expected, Dobson’s early season totals are very impressive.

In seven games this season the New York Islanders first rounder has three goals and three assists.  Dobson’s impact is critical for the success of the rebuilding Titan. The Titan’s 2018 first rounder, defenceman Benjamin Roode, has looked solid thus far and will be definitely be leaning on Dobson to show him the ropes in the first half of season.

The Titan is currently six games below .500 and is struggling to put points on the board in the tough Maritimes Division. The team currently finds itself in last place overall, but has had inspired performances by veteran forward Cole Rafuse, who is leading the way offensively for the Titan with six goals and three assists.

Recently acquired overage goaltender and former Moncton Wildcat, Mark Grametbauer, has brought stability and experience to the Titan organization. Grametbauer had a rough first outing against his former squad back on October 7 when the Wildcats blitzed their former teammate in an 8-1 victory.

The Wildcats also spoiled the Titan’s home opener back on September 20th by scoring three late third period goals, on route to a comeback victory. The acquisition of former Wildcat MVP Grametbauer has simply added fuel to the already intense rivalry.

To top it all off, the Moncton Wildcats hold the Titan’s first round selection in the next QMJHL Draft.

The long-time rivalry will continue to heat up this weekend as both teams will be trying to claw their way up the QMJHL standings.