Mooseheads at home tonight vs Titan 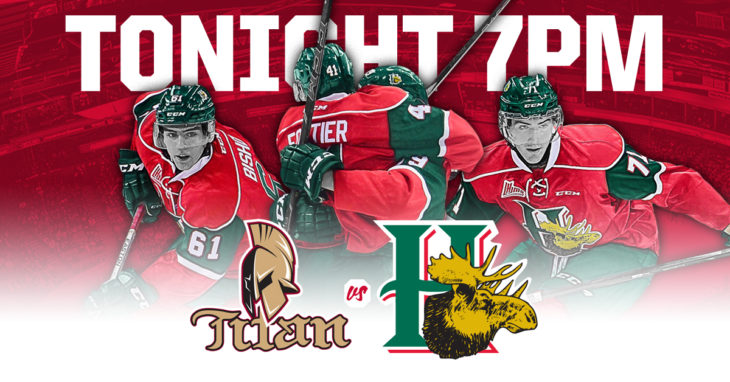 The Halifax Mooseheads have only four home games remaining in the regular season and Friday’s matchup with the Acadie-Bathurst Titan will be the last one until the middle of March as the team prepares for a six-game stretch away from the Scotiabank Centre.

Make sure you get out to cheer on the home team as they continue to fight for playoff positioning in the QMJHL standings. The Mooseheads entered Thursday’s action in 12th place overall and just three point behind the Gatineau Olympiques. Halifax is 2-4-1 against the Titan this season and the games between the teams at Scotiabank Centre have been interesting to say the least with an exciting overtime battle earlier this month and the now infamous 11-10 game back in November.

The Titan will have a six-game winning streak on the line when they come to Halifax that has seen them climb to sixth overall and surpass the 70 point plateau for the first time since the 2010-11 season, clinching a playoff spot with an 8-7 OT victory over Saint John on Wednesday. 20-year-old Christophe Boivin leads the way with 38 goals and 78 points but players like the NHL draft eligible Antoine Morand and Russians Daniil Miromanov and Vladimir Kuznetsov have really come into their own this season to become dangerous offensive weapons.

Nico Hischier is enjoying one of the best rookie seasons in Mooseheads history and is currently tied with Petr Vrana for third in goals by a Halifax rookie with 37. Hischier is looking to close in on Nikolaj Ehlers’ second most of 49 set in 2013-14.