Mooseheads advance to Final despite loss to Huskies 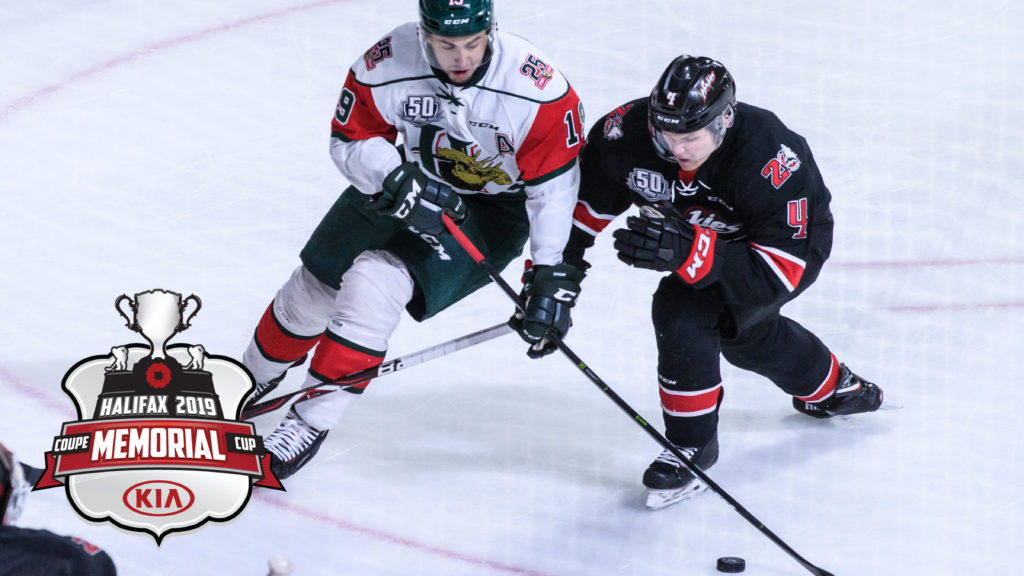 In one of the more unusual scenes of the 2019 Memorial Cup Presented by Kia, the crowd in Halifax rose to its feet at the conclusion of this evening’s round-robin finale and wildly cheered on the host Mooseheads despite a 4-3 setback to the President Cup Champion Rouyn-Noranda Huskies.

They cheered because, regardless of the defeat, the Mooseheads (2-1) have automatically advanced to Sunday’s championship final thanks to the total of goals for/goals against tiebreaker method employed at the tournament.

Felix Bibeau, Joel Teasdale, William Rouleau and Jakub Lauko would score for the Huskies, who received a 23-save effort from Samuel Harvey in the win. Benoit-Olivier Groulx, Arnaud Durandeau and Antoine Morand replied for the Mooseheads. Alexis Gravel would stop 36 shots for the host team.

The Huskies would score the only two goals of the first 20 minutes in the latter half of the period. Bibeau would open the scoring at the 14:38 mark of the first, sneaking in behind the Mooseheads defense and tucking the puck over Gravel after defenseman Alexis Arsenault made a valiant effort to keep the play alive at the Halifax blueline.

The Huskies would strike again 72 seconds later as Peter Abbandonato would hit a streaking Teasdale with a hard cross-crease pass. The Montreal Canadiens prospect proceeded to find the back of the net with a shot from in close. Both goals in this stanza would be reviewed for offside infractions before being upheld.

Halifax would fire home all three goals recorded in the second period. Groulx would get the Moose back to within one just 48 seconds into the stanza, driving down the right wing and unleashing a wrist shot in mid-stride that eluded Harvey.

The Mooseheads would then tie things up at the 7:34 mark when Durandeau tucked a perfectly placed wrist shot just under the crossbar for his first of the tournament.

Morand would give the Moose their first lead of the contest on the powerplay with 42.9 ticks left on the clock in the middle period. All five players on the ice in a white sweater would touch the puck on a play that was completed when Keith Getson zipped a pass through the blue paint and onto the stick of the Halifax captain who made no mistake for his third of the tournament.

With Rouyn-Noranda outshooting Halifax 18-2 in the final frame, it was only a matter of time before the QMJHL champs found the back of the net. The Huskies would finally knot the score once more at the 10:13 mark of the third period when Rouleau streaked down the left side and cleanly beat Gravel with a rising wrister to make it a 3-3 game.

Jakub Lauko would break the deadlock with 54.5 seconds left in the third, unleashing a hard wrister past the glove hand of Gravel for the game winner.

The Huskies now turn their attention to the Ontario Hockey League Champion Guelph Storm. The two clubs will battle on Friday night at 8PM AT in the tournament Semi-Final.