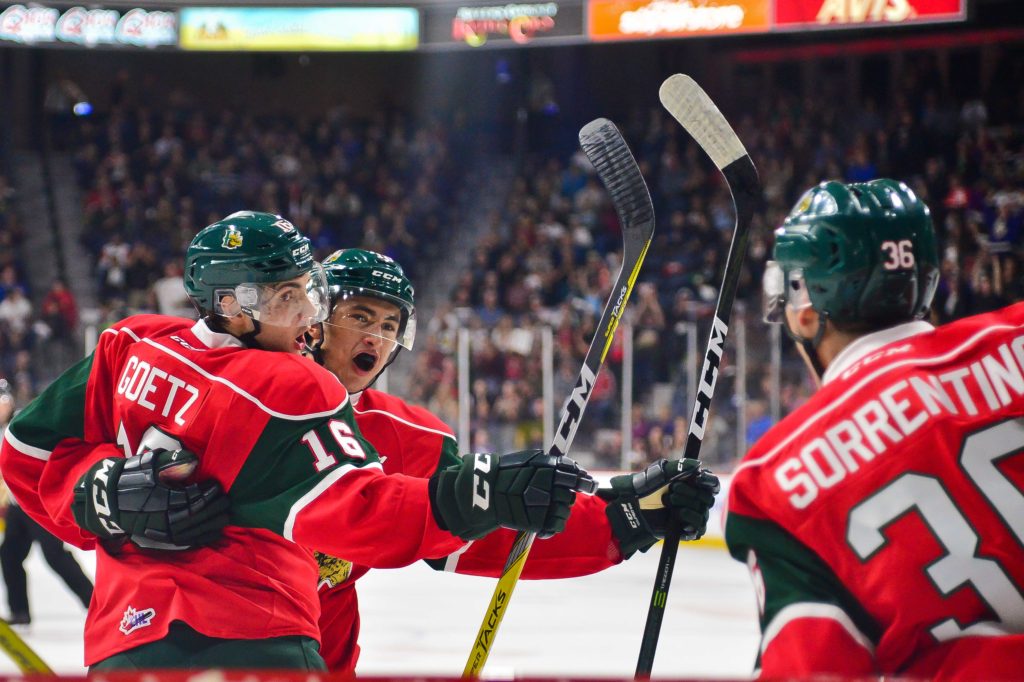 It wasn’t pretty, but the Mooseheads will take it. Halifax fought its way to a 6-4 victory over the Cape Breton Screaming Eagles on Saturday night at Scotiabank Centre to improve to 2-1 on the season.

The Mooseheads had to hold off a strong effort from a Screaming Eagles team that was energized despite playing in the finale of a three-games-in-three-days road trip. Veteran forward Max Fortier came up with the winning goal at the 9:37 mark of the third period when he brought the puck out from behind the net and lifted a backhand shot over goaltender Kyle Jessiman. Rookie Nico Hischier grabbed the lone assist.

“I didn’t think I played well in the first two periods so I knew I had to come harder in the third,”  said Fortier who also iced the game with an empty net goal in the final minute.

“For sure it’s nice to win and I think we deserved it. We played well and all four lines did something tonight.”

The win was especially sweet for newcomer Keigan Goetz who scored in his debut and didn’t shy away from the typical rough play which comes along with most Halifax-Cape Breton matchups.

“It was a hard game and both teams fought well but it was good to get the win. The boys made it really easy on me we worked hard together as a line and as a team,” said Goetz.

The 20-year-old was signed as an OHL free agent earlier in the week after spending parts of three seasons with Sault Ste. Marie and Barrie.

The second period featured several roughing penalties and fighting majors from third star Bradley Kennedy and Eagles defenceman Max Baillargeon. Cape Breton’s Dillon Boucher was assessed a five-minute major and a game misconduct for a hit from behind on Nico Hischier near the Mooseheads bench. The Eagles were incensed with the officials earlier in the game when there was no call as Peyton Hoyt was hit and was forced to leave the game.

The Eagles drop to 1-4 on the year with the loss. Cape Breton’s goals came from Drake Batherson (2), Jordan-Ty Fournier and Tyler Hylland. Neither team could cash in on the power play with Halifax going 0-4 and the Eagles finishing 0-3.

Brett Crossley opened the scoring in the game when the Mooseheads veteran took advantage of a Cape Breton turnover near the blueline and floated a backhander through traffic at 7:48 of the opening period. Crossley finished the night with two points and was a +3. Hylland and Batherson quickly responded for the Eagles until Goetz evened things up 2-2 at 12:10. Captain Taylor Ford gave Halifax the lead once again as he snuck in from the point and scored with 6.6 seconds remaining in the period.

Connor Moynihan put the Moose ahead 4-2 near the midway point of the second stanza when he buried a Walter Flower rebound on a two-on-one. Goals from Fournier, the second star, and Batherson evened the score at 4-4 heading into the final 20 minutes and Fortier’s two goals were the difference in the third.

The official paid attendance at the game was 6,977 as the team celebrated free t-shirt night with its fans.

The Mooseheads will make a quick road trip to Charlottetown on Sunday when they face-off with the Islanders at 3pm. Halifax will return home next Friday night to entertain the Rimouski Oceanic at 7pm at Scotiabank Centre.

Purchase your tickets today at the Ticket Atlantic Box Office at Scotiabank Centre, select Superstore Outlets, TicketAtlantic.com or by phone at 902-451-1221.