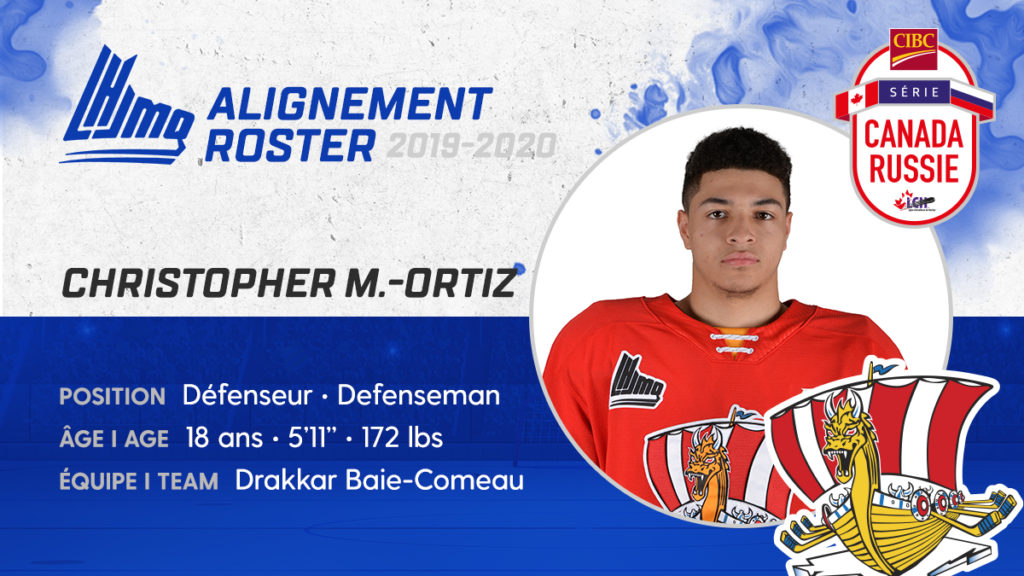 The Quebec Major Junior Hockey League, in association with the Canadian Hockey League and Hockey Canada, announced today that Baie-Comeau Drakkar defenseman Christopher Merisier-Ortiz has been added to the Team QMJHL lineup for the 2019 CIBC Canada Russia Series.

Merisier-Ortiz will be joining Drakkar teammates Xavier Bouchard, Gabriel Fortier and Nathan Légaré on the roster.

The native of Boisbriand, Quebec collected 33 points in 66 games last season, including 28 assists. This year, he currently has six points in 14 games. The 18-year-old defenseman represented Team Canada at the U-17 World Hockey Challenge in 2017 where he won a silver medal.

Merisier-Ortiz was drafted by the Baie-Comeau Drakkar in the first round, 7th overall, of the 2017 QMJHL Draft. Earlier this year, he participated in the Calgary Flames’ training camp.

The 2019 CIBC Canada Russia series is proudly supported by title partner CIBC and associate sponsors Kia Canada, Cooper Tires and Kubota Canada.  All games will be broadcast nationally on Sportsnet and TVA Sports.