Media panel cast votes for CHL Team of the Century

CHL Team of the Century
by
LHJMQ/QMJHL 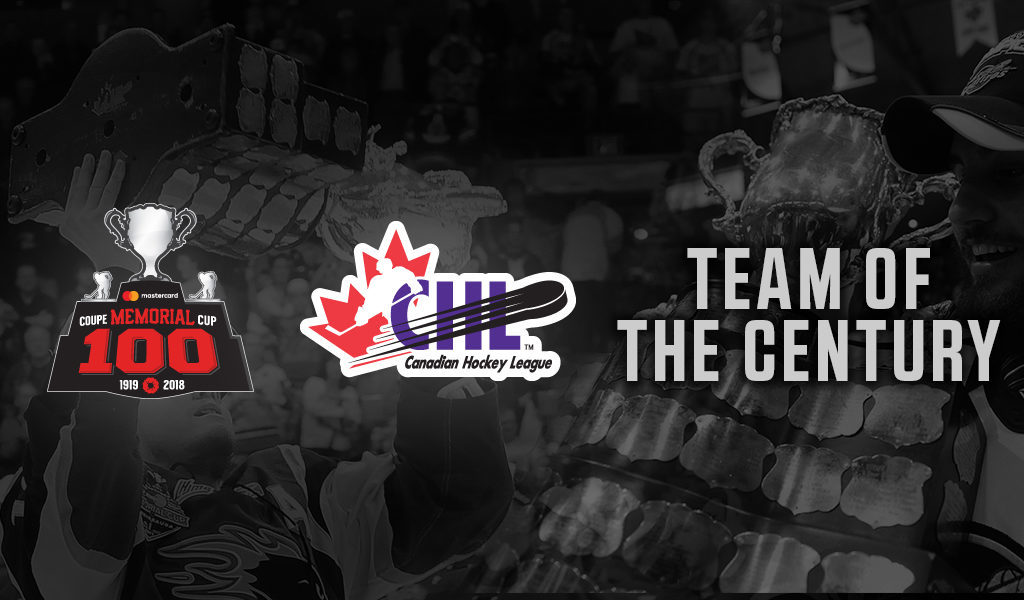 In celebration of the 100th edition of the Mastercard Memorial Cup, the Canadian Hockey League is asking fans to cast their vote for the Team of the Century.

With 99 Mastercard Memorial Cup champions eligible for the prestigious honour, we asked media from across the province to help identify some of the top candidates with rationale for their selections.

All four media polled shared their Top-4 picks that included two teams from the QMJHL / Quebec region, one team from the OHL and one from the WHL / Western Canada region.

It took a perfect team to shut down Sidney Crosby and the Rimouski Oceanic in the title game and that’s exactly what the London Knights were.

The two battles opposing these great teams were memorable. The Knights needed overtime to win the round robin game 4-3, but 60 minutes of hockey were sufficient to close the event with a 4-0 triumph over the Oceanic.

Overall, Dale Hunter and the Knights won 79 of their 90 games that year and became a CHL dynasty with this 2005 conquest before their fans. Corey Perry, Rob Schremp, Danny Syvret and Adam Dennis… what a team!

There was a heavy burden on the Predateurs’ shoulders but this special team did great things on the ice in playing an historical role for the QMJHL. A reminder that the last quarter-century had been long and difficult for teams from La Belle Province, Francis Bouillon became the first Quebecois to lift the Memorial Cup since Guy Lafleur.

The Michel Therrien-led Preds had a dream run that year, defeating the host Peterborough Petes in the final after having lost to them in the round-robin portion of the event. How can we forget that 4-0 win over the Petes in front of their fans, with a mist of fog floating on the ice? The stuff of legend! It is impossible to let go of the memory of that 1996 squad with Frédéric Deschênes, Xavier Delisle, and Philippe Audet to name a few!

The Cataractes had quite a steep hill to climb, having to rebound 31 days after their last game.  Shawinigan, the oldest club in the QMJHL, was ousted in the second round of the Q playoffs, dropping a tough Game 7 at home. Let’s not forget that the Cataractes had not ever won the Memorial Cup since the club’s founding back in 1969.

That was quite the monkey on their back as head coach Eric Veilleux’s troops returned on their home ice, but they came to life in the tiebreaker and got revenge over their league rivals, the Saint John Sea Dogs in the semifinal.

The final game of the tournament was one for the history books as hometown hero Michael Bournival set up the game-winning goal in overtime. The work put in by Michael Chaput, Gabriel Girard, Brandon Gormley and Anton Zlobin made the difference as Shawinigan finally had its championship team.

The Kamloops Blazers are possibly the CHL’s top team of the 1990s.Back in 1995, the Blazers won a second straight Memorial Cup title, this time both as WHL champions and tournament hosts. This was also Kamloops third championship in four years.

Don Hay’s club pounded on the Detroit Junior Red Wings 8-2 in the final game in front of the local fans who were all dressed in white, adding to this magical moment!

This great team was made up of great players, including Shane Doan, Jarome Iginla and Darcy Tucker who all of course went on to shine on the NHL stage in the years to come.

The 1996 Granby Predateurs are certainly one of the most dominant teams to win the Memorial Cup in the QMJHL’s history since the inaugural 1969-70 season. Masterfully led by coach Michel Therrien, the Predateurs ended the regular season with a 56-12-2 record. The team had five players with 80 or more points in Martin Chouinard, Xavier Delisle, Daniel Goneau, Jean-Francois Brunelle and Philippe Audet, who would go on to also lead the tournament in scoring. The Predateurs ended a 25-year Memorial Cup title drought for Quebec-based teams, dating back to 1971.

The 2005 London Knights remain arguably the best championship team of all time after compiling a staggering 59-7-2 record, including an impressive 31-game winning streak to start the season. The Corey Perry-led Knights won 79 games (59 regular-season victories, 16 OHL playoff wins and a perfect 4-0 record at the Memorial Cup). The Knights captured the national title by defeating Sidney Crosby and the Rimouski Oceanic in the final.

The 1985 Prince Albert Raiders must be considered one of the best Junior hockey teams to claim the Memorial Cup. Led by Terry Simpson, the Raiders won 58 of their 72 regular-season games in 1984-85. Four players broke the century mark, and they were led offensively by Emmanuel Viveiros, Dave Pasin, Pat Elynuik, Dave Manson and Ken Baumgartner, just to name a few.

The 2013 Halifax Mooseheads also had a dream season led by head coach Dominique Ducharme.  The Mooseheads relied on a young team, including two of the three top picks at the 2013 NHL Draft, Nathan Mackinnon and Jonathan Drouin who would blow their rivals out of the water in Saskatoon. Halifax concluded the 2012-13 season, with a 58-6-4 season and defeated the Portland Winterhawks in the championship game, a team that won 57 games that same season. The Mooseheads also had other big names on their roster including goaltender Zachary Fucale, Martin Frk, Mackenzie Weegar and Stephen MacAulay.

Only three years after the tragedy that claimed the life of four team members, the Swift Current Broncos faced the host Saskatoon Blades in an all-Saskatchewan final. In the WHL Playoffs, the Broncos had a 12-0 record, taking care of Moose Jaw, Saskatoon and Portland in consecutive sweeps. The team relied on Trent McCleary, Sheldon Kennedy and Dan Lambert, along with goaltender Trevor Kruger (47 regular season victories). Before 11,000 fans split between both teams, the Broncos won the first-ever final opposing two WHL clubs, by a score of 4-3 in overtime.

I’m biased here since we had the privilege to experience this tournament on-site with TVA Sports. Quickly ousted from the OHL Playoffs, Rocky Thompson’s Windsor Spitfires spent 44 days in boot camp and came out guns blazing to defeat the Saint John Sea Dogs on their way to a perfect run in the round-robin portion of the event as tournament hosts. The Erie Otters gave it their all, but in the third period, Aaron Luchuk made the WFCU Centre erupt, leading GM Warren Rychel’s squad to the top of the CHL mountain. Windsor also became the 10th host team to win the Memorial Cup.

I had the privilege of experiencing this conquest from behind the scenes since I was the tournament’s host announcer. I realized how steep a hill it was to climb for the Cataractes. After losing their opening game to the Edmonton Oil Kings, the hosts surprised the London Knights in their second game, before losing again, this time against Q rivals and President Cup champions, the Saint John Sea Dogs. This forced them to play the tiebreaker, where they got revenge over Edmonton. The Sea Dogs fell to the Cataractes in the semifinal and Anton Zlobin scored in overtime to win an epic final over the Knights, 2-1.

When a player scores a hat trick in the opening game of a tournament, you just know he is just getting warmed up. That was exactly the case for Nathan MacKinnon’s of the Mooseheads against the Portland Winterhawks. The Mooseheads then lost to the Saskatoon Blades, but followed that up with a convincing 9-2 victory over the London Knights to punch their ticket straight to the final. In a duel between MacKinnon and Seth Jones, the top two prospects for the NHL Draft a month later, MacKinnon skated around Jones to score the Mooseheads’ fourth goal while Halifax goalie Zachary Fucale resisted to the Winterhawks’ desperate attacks in the dying moments to lead Halifax to the Q’s most recent national title.

The Predateurs run to the championship was historic to say the least given they ended a 25-year Memorial Cup drought for the QMJHL. Over that dry spell, the QMJHL as a product was perceived as being of lesser quality than Canada’s other two junior leagues. That inferiority complex was obliterated by Michel Therrien’s squad which included the likes of Francis Bouillon, Georges Laraque and Jason Doig.

Second on the list would be the 1995 Kamloops Blazers who raised the Memorial Cup in front of their home fans. That triumph marked the Blazers’ second straight national crown and fourth win in four years. Don Hay’s squad literally steamrolled the opposition as the Blazers counted such stars as Shane Doan, Darcy Tucker and Jarome Iginla.

No. 3 on my list are the 2010 Windsor Spitfires who went on a run of perfection as they won their second straight Memorial Cup title, becoming the eighth in team in tournament history to manage the feat.

Rounding out this quartet are the 2012 Shawinigan Cataractes who pulled one of the greatest turnarounds in history. After bowing out in the second round of the QMJHL playoffs, the Cataractes had to patiently practice for a month before attacking the Memorial Cup tournament under the watchful eye of their home fans. The oldest franchise in the QMJHL went on to defeat all three league champions over a span of four days to win the club’s first-ever Memorial Cup championship. A team effort in every sense of the word. In the end, 15 players who would take part in the tournament would go on to reach the NHL, but none from the Cataractes.