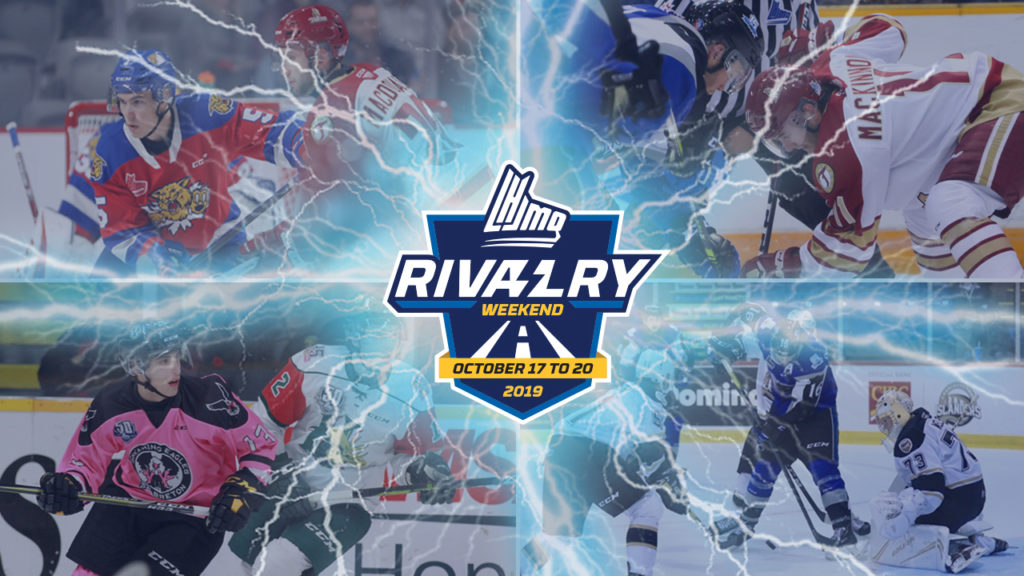 Much like the rest of the country, hockey rivalries on the East Coast are well rooted, typically heated and generational. In all eras, at several levels, Maritime hospitality often gets tossed aside when skates hit the ice. Rivalry Weekend in the QMJHL once again shines a spotlight on some of the fiercest of those battles.

Although the Cape Breton Eagles have experienced sweeping organizational changes over the past few months, one thing will always remain a constant; a healthy animosity towards their fellow Nova Scotia “Q” representatives, the Halifax Mooseheads. The two clubs have waged a war in the league for 22 years. Three playoff series and a host of endearing memories later has not tempered feelings on either side of this long-standing feud, which resumes on Friday night in Sydney and Saturday night in Halifax.

This weekend sees the two clubs separated by a razor thin margin in the contentious Eastern Conference standings face off. The Eagles enter the week as the top offensive club in the circuit, featuring three of the league’s Top 10 scorers in Egor Sokolov, Ryan Francis and Shawn Boudrias. Two of the top four defensive scorers in the QMJHL, Adam McCormick and Jarrett Baker, also wear the black and white.

The Mooseheads continue to be a tough opponent despite losing key elements of their Memorial Cup host squad of a year ago. Edmonton Oilers 2019 draftee Raphael Lavoie leads the way offensively while the club was given a boost over the past two weeks with the return of center Benoit-Olivier Groulx and goaltender Alexis Gravel from NHL training camp and injury, respectively. As an added bonus, a pair of first-year head coaches – Cape Bretons’ Jake Grimes and Halifax’s J.-J. Daigneault – will be getting their first opportunity to write their names in the history book of this battle.

Will the firewagon Eagles rain down on the Moose or will the team from the provincial capital get the job done by committee? If history is any indication, it will be exciting to find out regardless!

The Saint John Sea Dogs, trying to gain traction in the league standings, will be looking for a major momentum boost in the form of a pair of contests against their rivals from across the Confederation Bridge, the Charlottetown Islanders.

The Dogs have won just three of their first ten games in a season that is primed to be a coming out party for several of the talented youngsters that have been stockpiled onto the roster. Despite those early season struggles, the club is indeed proving that the kids are alright. Of the six players averaging at least a point per game, four are 17-year-olds; winger Brady Burns and defensemen Jeremie Poirer, William Villeneuve and Charlie DesRoches. With four goals on the young season, Joshua Roy is showing flashes of the skill that made him the top selection in the 2019 QMJHL Draft.

On the other side of the spectrum are the Isles, the last team in the league to have suffered a regulation loss. As is tradition in Charlottetown under Head Coach Jim Hulton, the job is getting done by committee with high calibre talent in centers Nikita Alexandrov and Thomas Casey, rookie winger Gaetan Jobin and defenseman Lukas Cormier. Then there’s veteran netminder Matthew Welsh, who is doing all that he can to put an exclamation point on his junior career while leading the league in GAA (1.38) and save percentage (.947%).

Though they’ve only faced each other once in the postseason, a Sea Dogs series win in 2010, the two clubs have teamed up to provide entertaining hockey in both cities over the years. However, this weekend sees one team looking to become what their rivals already are. For the Sea Dogs, this could prove to be the biggest test of the year, just five weeks into the campaign.

When the Moncton Wildcats gained a provincial contemporary in the “Q” with the birth of the Acadie-Bathurst Titan in 1998, it included a built-in rivalry between the Southern and Northern regions of New Brunswick that took virtually no time to escalate.

A lot can happen in 21 years. And much of it has happened between these two organizations. Between the Titan and Cats, they boast four President Cups, a pair of Jean-Rougeau Trophies and plenty of bad blood, particularly during the early days of this rivalry. However, there’s one thing the Titan can lay claim to that the Wildcats have desperately been trying to obtain for almost two and a half decades; a Memorial Cup Championship, which Acadie-Bathurst claimed in 2018.

It’s been a tough road for the Titan ever since that magical night almost 17 months ago. The club won all of eight games last year and enters this week still waiting for their first triumph of 2019-2020. Despite strong starts from wingers Shawn Element and former Wildcat Anderson MacDonald, as well as veteran netminder Tristan Berube, the club from the Chaleur region has yet to get its legs underneath it this year.

Meanwhile in Moncton, the club is in the thick of the Eastern Conference standings thanks to contributions from Calgary Flames 2019 first rounder Jakob Pelletier, Minnesota Wild prospect Alexander Khovanov and leading rookie scorer Zachary L’Heureux. Combined with the recent additions of returning winger Jeremy McKenna and Boston Bruins defensive draftee Axel Andersson, the Cats appear ready to pounce on the competition.

Will the Titan stop the Cats in their tracks as they try to climb back into the QMJHL picture? If it happens, it will be all that much sweeter coming at the expense of their oldest foes.